“The coronavirus is devastatingly real but also feels like a metaphor for the broader ills the world is facing — the disease is global, connecting all of us, and yet it leaves us acutely isolated from one another, in quarantine.” – Naomi Zeveloff, Israeli journalist

At a time when so many of us are alone, concerned about the fate of our communities, the mediums of film and television can bring us together through their power to inspire, comfort and warm our hearts in these troubling times. These are Makom’s top recommendations for films that speak to our humanity at its best during these troubling times.

This light-hearted romantic comedy follows the impossible love story between a simple baker and an international supermodel. It ranks as one of the highest-rated scripted series ever in Israel. If your favourite films include Moulin Rouge, Grease, or Pride and Prejudice, this one is made for you. 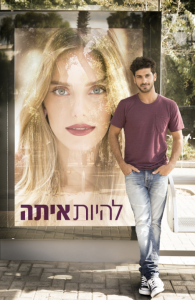 The series was created by Assi Azar, who had Bar Refaeli in mind for the lead role. Rotem Sela took the role when Refaeli pulled out. The series takes a comical approach to Jewish ethnic divisions in Israel by exploring the relationship between a privileged Ashkenazi woman and her working-class Yemenite love interest.

Think of Pretty Woman, except where the woman is beautiful and wealthy, and the man comes from a family of little means. It’s a great series for warm nights on the couch in quarantine with the people you love most.

You Can’t Ask That is an original series from the Australian Broadcasting Corporation that was picked by Kan, the Israeli Public Broadcasting corporation in 2018 and renamed Slicha Al HaShe’ela. Each episode asks controversial questions to a minority within the population whose voice is often unheard in the mainstream. If you are trying to better understand what Israeli’s greatest fears, hopes and dreams are, there is no better show to watch than this one. Episodes range from lighter topics such as being a teenager in Israel, to arguably what was the heaviest and most controversial episode of the show which interviewed women whose loved ones were murdered in so-called “honour killings.” Interestingly, there is no episode about BDS or the threat from Iran. 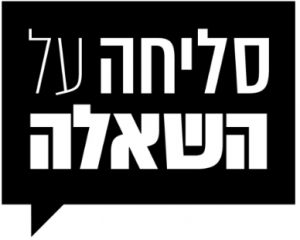 Unfortunately, not all the episodes have English subtitles, but three that we highly recommend for the truth and honesty of the participants are the episodes about those who live below the poverty line, children who were raised by same-sex parents and what it’s like being a non-Jewish Arab in Israel.

This series tells the story of four veterans of a special IDF commando unit from the 2006 Lebanon War who reunite, 11 years later, for a final mission — to rescue the girlfriend of one of the commandos who was abducted by a cartel in Colombia. Adrian Hennigan said in his review of the series for Haaretz: 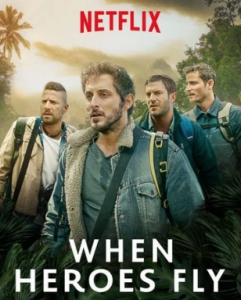 “What it does best is show how in Israel, mandatory army service is the melting pot that throws diverse groups together – so an Ashkenazi elite or Orthodox Jew can end up taking orders from a scrappy Mizrahi kid in a combat unit – and how these formative experiences bond them like brothers for life.” Hennigan also compared the show to the Israeli series Prisoners of War: “…with both shows powerfully depicting the silent horrors of PTSD as ex-soldiers struggle with their wartime experiences.”

This series is a co-production of Keshet Studios and HBO, created by Hagai Levi, Joseph Cedar and Tawfik Abu-Wael. The first episode depicts the kidnapping and murder of three Israeli teenagers Naftali Fraenkel, Gilad Sha’ar and Eyal Yifrach. It shows the many prayer and solidarity gatherings that swept Israel for two weeks when there was hope they may be found praying, and the disappointment and anger when it was announced that they had been murdered. The next nine epsidoes focus on the retalaitaion for this attack, which involved the kidnapping and murder of Mohammed Abu Khdeir. Three current and former yeshiva students carry out the attack, an adult and his two young relatives. Aside from the grief of the victims’ families, the series also follows the investigation of Khdeir’s murder and the tension that emerges among Mizrachi Haredi and the Palestinian Arab communities of Jerusalem after the incident.

A review by Esther Kustanowitz raises many of the questions viewers who watch this powerful series may ponder. “In the story of these murders, who are the villains, the heroes, the victims? Who are we willing to claim as “our” family? Are we more outraged by the murders of our own, or by our own murdering others? Are we able to see victims and perpetrators for who they are, and if so, how do we assimilate that in our daily lives and attitudes toward Israel and the occupation? Is our faith corruptible? Are our faith leaders fomenting rebellion or encouraging extremism?” She concludes that, “We should watch “Our Boys” precisely because it raises these kinds of questions and creates this kind of discomfort.”

Hayehudim Baim is a satirical Israeli television show that brings a Monty Python sensibility to Jewish history. The Israeli daily Maariv dubbed it “the perfect satire,” with every skit “funny to the point of tears.” In season 3 which is available on the KAN youtube page with English subtitles, you’ll find hilarious sketches depicting everything from the questions Jews asked of Moses when he first presented the 10 commandments to what the journey of Abraham would look like if depicted as storyline from Seinfeld.

But beyond the sensational aspects of these sketches, the show represents a desire of its secular creators to take ownership of Jewish history. “Traditionally, there is a separation between the secular and religious,” show co-creator and writer Natalie Marcus recalls. “They [the religious] have the ownership of this story, but they are our stories as well. This is our heritage and there’s no reason we can’t deal with and dig into the material of what made us, our DNA. It’s time for secular people to own the stories and tradition again.”

If studying in a beit midrash is not for you, then consider this show as a curious entry point into the world of the Jewish bookshelf.

Over the past decade, Lior Schleien has become the voice for the country’s secular liberals for more than any politician or activist. Dubbed by some as the “Jon Stewart” of Israeli comedy, following the 2018 Pittsburgh synagogue shooting he faced a challenging dilemma on his popular  weekly comedy show Gav Ha’Uma.

As Ben Sales noted in the JTA, “Schleien acknowledged that there was “nothing funny” about the shooting, in which a gunman killed 11 Jews at prayer at a Conservative synagogue in the most deadly attack ever on an American Jewish institution. But what was funny to Schleien? Israeli Diaspora Minister Naftali Bennett’s comments outside the synagogue at the time.

“A Jew is a Jew is a Jew and we embrace them all,” Bennett told an Israeli reporter in a video clip that Schleien ran on his show. “Every Jew in the world is welcome and loved.”

Schleien pointed out that Bennett is an ally to many Israeli politicians who have built careers denigrating non-Orthodox Jews.” 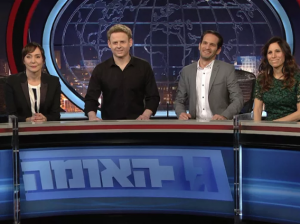 Whilst his comedy may be polarising to many, if you can watch this show and understand most of the jokes, consider yourself a true maven of Israeli politics and society. Several of the episodes are available here with English subtitles.

An accident during a bar mitzvah celebration leads to a rift between the men and women in a devout community in Jerusalem in this rousing, good-hearted comedy. Awash with Jerusalem’s distinctive glow, “The Women’s Balcony” is a warm, poignant portrait of a modern community struggling to balance protocol with practical, progressive values – at once rebellious and respectful in spirit. 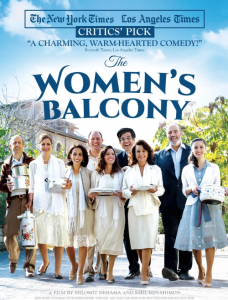 Sheila O’Malley writes in a review that while the mood of this film is that of a gentle and affectionate comedy, the also opens a  fascinating window into a part of Jerusalem that many tourists rarely see. If you have ever walked down one of those narrow passageways behind Machne Yehdua in Nachlaot and wondered hat happens after some guy calls strangers for a minyan which is how the first scene of the film begins, this one’s for you. The beautiful way it shows the many colours and flavours of Orthodox Judaism is both heartwarming a d profound.

And the last three for Hebrew speakers

Called “Unchained” in English, this KAN TV series tells the story of an employee of the Rabbinical Courts whose role is to convince get-refusers to agree to divorce their wives by the giving a halakhic writ of divorce—the get. The series emphasizes repeatedly that the power is in the hands of the husband to dissolve a marriage even if his wife has filed for divorce many years ago; even if he abandoned her and left Israel or even if she is carrying another man’s child who will be categorized as a mamzer. 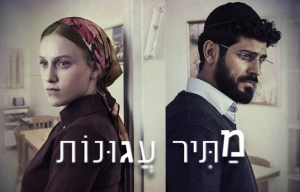 Many unmarried Israelis watching this show will realize how the women who are refused a get, are indeed pretty helpless in the Rabbinical courts. In addition to making for intense drama, this show hopefully internalises the importance of all couples signing the prenuptial Agreement for Mutual Respect before walking to the chuppah. The manner in which it depicts what couples endure during divorce makes for heavy and confronting viewing, so if that’s not something you want to see, maybe stick to the Baker and Beauty.

Highly appraised TV drama Muna only started broadcasting on public Israeli channel 11 in 2019, but has quickly become a milestone in Israeli TV making. For those seeking to understand the complex identity of non-Jewish Israelis, this is the best series made since Sayed Kashua’s Arab Labour.

The story it tells of a Palestinian-Israeli female photographer struggling with the issues of identity due to the backlash against her having a Jewish partner has captured Muslim, Jewish and Christian audiences alike, for its honest capture of the complex reality in which the Arab citizens of Israel live. 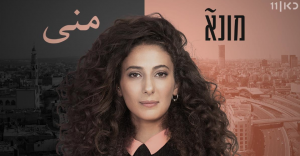 Each of the 6 episodes begins with the following questions:

“What is it about our Israeli-Palestinian conflict that won’t allow it to end? Is what happened between us really so unforgivable and unsolvable? Anat Zeltser and Modi Bar-On return to this story once again, but this time they try to tell it, not as a quarrel is recounted but as a lesson is taught.”

The first episode which tells the story from 1860-1919 is available for free on youtube.

It begins at the end of the 19th century when Jerusalem awakens from a long Ottoman sleep and becomes the centre of international attention once again. The years-long coexistence between Palestine’s Arab majority and Jewish minority starts to crumble as the pioneers of Jewish nationalism meet the seedlings of Arab nationalism. The British, who conquered Palestine in World War I, shower contradicting promises on the Jews and the Arabs and the two fledgling nationalist movements start on their collision course.

With incredible attention to detail, the researchers of this show have uncovered incredible primary documents from the time to tell the story of this twice promised land in a manner never done before to an Israeli audience. 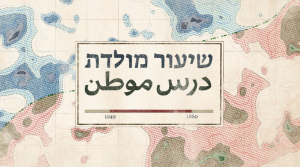 Ittay Flescher moved to Jerusalem from Australia in 2018. He teaches about Israeli culture and society on a number of gap year programs to those keen for an experience that comforts the troubled and troubles the comfortable.