Tisha B’Av and Eid el-Adha on the Temple Mount

Tisha B’Av and Eid el-Adha on the Temple Mount

This year Eid el Adha and Tisha B’Av fell on the same day. In any other place in the world, this need not be relevant. But Israel makes the spiritual, material. Our return to the Land of Israel has reasserted the place of Place in our worship. How can we better negotiate time and space, memories and place, people and land? 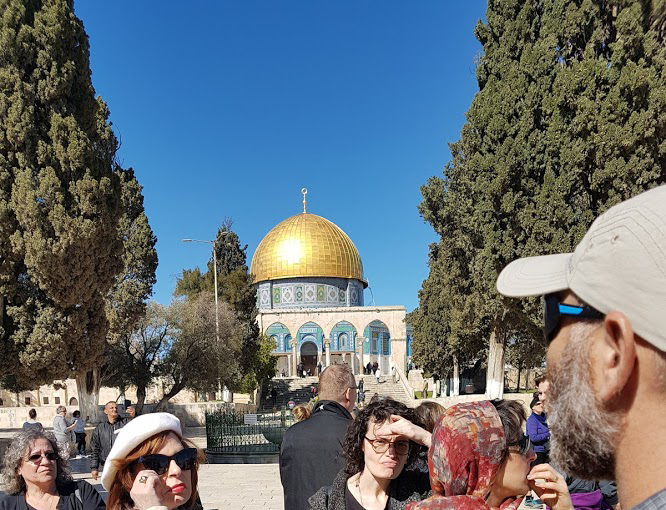 Photo: From a Makom visit to Temple Mount

The celebratory Muslim festival Eid el Adha, commemorating the sacrifice of Isma’il (not Isaac!), is accompanied by much barbecuing of meat symbolizing the lamb Ibrahim slaughtered instead of his son.

Tisha B’Av is a fast day. Remembering the destruction of the Temples, and various other catastrophes in Israel’s past. So much of a day of mourning it is, that it is traditional to eat mourner’s food and sit on the floor as if sitting shiva for a close relative.

This year Eid el Adha and Tisha B’Av fell on the same day.

In any other place in the world, this need not be relevant.

But Israel makes the spiritual, material.

Our return to the Land of Israel has reasserted the place of Place in our worship.

Some 150,000 Israeli Jews go to the Kotel during this fast, and mourn the loss of the Temple – that stood only a few hundred yards, and a few thousand years away.

There are others, a growing number, who feel the most appropriate place to mourn the loss of the Temple is not at the left-overs of an outer wall (The Kotel), but at the site of the destroyed Temple itself: What we call Temple Mount (Har HaBayit), and what Muslims call the Noble Sanctuary (al-Haram al-Sharif).

The Jews called for the freedom to pray at their Holy Place. The Wakf decried this provocation, and moved to prolong the Muslim prayer time so as to prevent the Jews’ entrance. The police decided that it was too dangerous to guarantee the public’s safety, and forbade Jewish entrance to the Al-Aqsa compound. Politicians on the right raged: Is Jerusalem ours or not? How can we give in to threats? The police eventually allowed Jews to enter the Temple Mount.

Violence, tear gas, unrest ensued. 4 police officers and over 60 Muslim civilians were injured. Eid el Adha was no fun in Jerusalem this year. (Tisha B’Av was no fun either, but then it’s not supposed to be.)

Many argue that the Jews wishing to pray on Temple Mount are provocateurs. Others argue that a religious visit to one’s Holiest Place ought not be met with threats of violence. Others simply wish to avoid a spark in this long dry summer.

Towards the end of his excellent final lecture, Amos Oz z”l talks of the paradox of attempting to replace in the realm of space, something that was lost in the realm of time. He likens these attempts to a form of madness – and attacks both Palestinians and Jews for the same dangerous madness of “reconstritis”.

But hasn’t the State of Israel always been a paradoxical combination of time and place? Aren’t we constantly re-membering and re-placing ideas, memories, and practices from the past into the here as well as now?

How can we better negotiate time and space, memories and place, people and land?

Thoughtful and somewhat uplifting story of the same day, same Eid el-Adha/Tisha B’Av clash, with a different result – A Tisha B’Av of Coexistence

Here the Jerusalem Post portrays Yehuda Glick, a leader of the movement to allow Jewish prayer on Temple Mount

An informative report of the recent events