Every Friday, two groups of Jewish women stand outside the Prima Kings Hotel in Jerusalem. On one side of the street, I see a woman holding a sign saying, “End the Occupation.” Opposing her on the other side of the street is a different woman holding a sign that reads, “The Land of Israel Belongs to the Jewish People”. Each of these signs tell a different story about the land beyond the Green Line (Israel’s internationally-recognized boundaries). The “End the Occupation” woman focuses on long lines outside military checkpoints, soldiers arresting Palestinians in the middle of the night, and the large cement wall cutting Palestinians off from their land. To her, what is happening beyond the Green Line is military occupation of the Palestinian people. The “homeland” woman is telling the story of biblical connection between Jews and Judea, where Abraham and Isaac and Rachel and Leah and Rebecca once walked. She may also be thinking of the more contemporary Jewish communities, such as Efrat and Hebron, that were evacuated during the various Arab-Jewish clashes between 1929 and 1948. For her, there is an inherent right for Jews to return to their (theological and historical) homes. 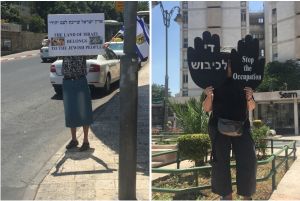 These two women are clearly in disagreement — but they’re having two separate conversations. When Palestinian reality and Jewish history are pitted against each other, neither narrative is explored on its own merit. Disagreement is okay, but can we at least agree about what we disagree on?!

So what is the disagreement here? There exists a fiery political dispute about Israel’s relationship to territory beyond the “Green Line.” What underlies the conversation about Israel and its presence in the West Bank is a tension between the interplay of freedom, land, and peoplehood in the contemporary Israeli landscape. In order to explore these values and their manifestation in today’s discourse, we need to talk about the “O Word”: Occupation. There exists institutional Jewish anxiety around this word, so before we go any further, say it out loud to yourself. Occupation. Did you do it? Great. Now, let’s unpack this word and why it’s become so controversial in Jewish discourse.

Those who talk about Israel’s occupation of the West Bank look to International Law’s definition of occupied territory from Article 42 of the Hague Regulations. According Hague, “territory is considered occupied when it is placed under the hostile army.” Colloquially, some people refer to this definition as “boots on the ground” — which is to say, if an outside army has its boots on the ground, then the land is occupied. One might think that for all the legal disagreement and political hullabaloo around Israel and “the O Word”, the definition would be more nuanced, ambiguous, or convoluted. Alas, sometimes the simplest things are the most complex.

For those who use the “boots on the ground” litmus test, the status of the West Bank appears quite clear: the Israeli Army has an entire division called the “West Bank Division,” and Israeli soldiers frequently patrol and arrest within Palestinian areas of the West Bank. According to the United Nations Office for the Coordination of Humanitarian Affairs (UNOCHA), the Israeli Army maintains 64 fixed military checkpoints and 76 partial checkpoints within the West Bank. If “boots on the ground” is your point of reference, it is difficult to argue that what is happening in the West Bank is anything but occupation.

Why, then, is there a debate within the Jewish community around the status of the territories? In addition to the legal issue of the land, many religious Zionists believe that Jews aren’t occupying the land because–barring the years between 1948 and 1967–Jews have always lived there. In fact, rather than calling the territory by its post-1967 political name (the West Bank), they often prefer its biblical name, Judea & Samaria. How can Jewish return to Jewish land be considered occupation? Prime Minister Bibi Netanyahu reflected this ethos at the January 2020 Kohelet Policy conference when he said, “Jews in Judea/Samaria are not settling in a foreign land. That is a distortion of history. Jews have lived in Jerusalem and Hebron for thousands of years consecutively…we never lost our right to live in Judea & Samaria, the only thing we lost temporarily was our ability to exercise that right.” In this view, the land has always belonged to the Jews — so occupation?! How!?

If we juxtapose Bibi’s statement with the Hague Regulation on occupied land, it does indeed seem that the reality of Israeli occupation and the legacy of Jewish history are at odds with each other. If the West Bank is occupied by Israel, then the Jewish communities in Efrat and Hebron are illegal settlements rather than a reestablishment of evacuated communities. But to many in the Jewish discourse, Jewish settlement in Judea is a return rather than an arrival, and the term occupation feels like an erasure of deep Jewish history. But could it be possible that the Jewish people can maintain its connection to the land without deploying their military to control it? Or, in Makom speak, do “Land” and “Freedom” need to be in tension in order for Jews to claim their legacy of “Peoplehood” in this region?

This tension creates a sticking point in the Jewish discourse about the Israeli-Palestinian conflict, especially in the diaspora. When the conversation about occupation devolves into the type of mismatched disagreement that the women outside Prima Kings Hotel represent, students may feel pressure to take a stand in a false binary: if you believe in the Jewish connection to Judea then you must resist the narrative of occupation in the West Bank (or, alternatively, if you want Palestinian oppression at the hands of Israeli soldiers to end, then you must give up on the Jewish legacy in the land). But, again, the dichotomy is false and reifies the nuance into a banality that undermines both positions. Micah Goodman of the Shalom Hartman Institute offers some helpful nuance in his book Catch 67. He argues that while Israelis will sometimes disagree about whether or not the land beyond the Green Line is occupied, few will disagree that Palestinians live under military occupation. If we can separate the conversation into the status of the land and the experience of those who live in it, then we can bring the two women from Prima Kings into conversation with each other: we can discuss Jewish legacy without refuting Palestinian reality.

For educators who are interested in opening this conversation with students, I encourage you to begin with different maps of Israel (in particular, you could take a map from the US Library of Congress, a map from the Palestinian ministry of education, a map of the biblical tribes of Israel, and a map from the Israeli ministry of education). Ask your students what stories these maps tell as they pertain to the West Bank/Judea & Samaria. Specifically, point them towards how/if borders are demarcated and what language is used to mark different territories. To elevate the conversation, challenge your students to explore some of the questions posed here about the relationship between freedom, land, and peoplehood.