“Lydda 1948” takes us to another valley, the Lydda valley in the centre of the country and tells the story of the Zionist development of the valley from the first initiatives before the First World War through to the deportation of the inhabitants of Arab Lydda in the course of the 1948 war.

The valley yields one great success, the marvelous Ben Shemen youth village founded in the mid-20’s. Under the firm hand of its pioneer visionary founder, Dr. Siegfried Lehmann, this became a model of a successful Zionist community in the most enlightened sense of the term, catering to its own residents and offering medical and human services to the Arabs of Lydda and the surrounding villages.

Yet as the youth village develops in size and scope preserving its original humane Zionist vision, the world around it is changing. Since the Arab revolt of the late 1930’s, both Arab and Jew have grown more openly confrontational and it has become increasingly clear to many on the Zionist side, that the only way towards the needed Jewish state will be armed struggle between Jews and Arabs. Zionist groups are training for armed confrontation believing that the moment for a final reckoning will soon occur. Lehmann’s brand of Zionism is about to vanish.

When the struggle breaks out in December 1947 after the United Nations decision to divide the country into two states, it is raw and brutal. For Shavit, the peak of the whole story comes with the Jewish conquest of Lydda and the subsequent expulsion of its 35,000 Arab inhabitants (including refugees from other towns and villages). For Shavit, this raises questions about the validity of the whole Zionist enterprise. He struggles with living as a Zionist Israeli in the full knowledge of what happened in Lydda.

Lehmann wanted Zionism to suggest a cure both for the modern Jewish people and for modern man; he wanted it to fulfill an urgent national task in a manner that would benefit all of humanity. He wanted Zionism to be a settlement movement that was not tainted by colonialism, a national movement that was not scarred by chauvinism, a progressive movement that was not distorted by urban alienation. He believed that Zionism must not establish a closed-off, condescending colony in Palestine that ignored its surroundings and native neighbors; it must not be an Occidental frontier fortress commanding the Orient. On the contrary, Lehmann believed that Zionism must plant the Jews in their ancient homeland in an organic fashion. It must respect the Orient and become a bridge between East and West.

Lydda suspected nothing. Lydda did not imagine what was about to happen. For forty-four years, it watched Zionism enter the valley…They did not see that while Dr. Lehmann preached peace, others taught war. While Dr. Lehmann took his students to the neighboring Palestinian villages, Shmaryahu Gutman took them to Masada. While the youth village taught humanism and brotherhood, the pine forest behind it hosted military courses training Ben Shemen’s youth to throw grenades, assemble submachine guns, and fire antitank PIAT shells. The people of Lydda did not see that the Zionism that came into the valley to give hope to a nation of orphans has become a movement of cruel resolve, determined to take the land by force.

Lydda is our black box… If Zionism was to be, Lydda could not be. If Lydda was to be, Zionism could not be. In retrospect it’s all too clear. When Herbert Bentwich saw Lydda from the white tower of Ramleh in April 1897, he should have seen that if a Jewish state was to exist in Palestine, an Arab Lydda could not exist at its center. He should have known that Lydda was an obstacle blocking the road to the Jewish state and that one day Zionism would have to remove it. But Herbert Bentwich did not see, and Zionism chose not to know.

We will all be held accountable for this era. We shall face judgment. And I fear that justice will not be on our side. There is an impression that the quick transition to a state, and to a state of Hebrew power, drove people mad. Otherwise it is impossible to explain the behavior, the state of mind, the actions of the Hebrew youth, especially the elite youth. The moral code of the nation, forged during thousands of years of weakness, is rapidly degenerating, deteriorating, disintegrating.

I see that the choice is stark: either reject Zionism because of Lydda, or accept Zionism along with Lydda…One thing is clear to me: the brigade commander and the military governor were right to get angry at the bleeding-heart Israeli liberals of later years who condemn what they did in Lydda but enjoy the fruits of their deed. I condemn Bulldozer. I reject the sniper. But I will not damn the brigade commander and the military governor and the training group boys. On the contrary. If need be, I’ll stand by the damned. Because I know that if it wasn’t for them, the State of Israel would not have been born. If it wasn’t for them, I would not have been born. They did the dirty, filthy work that enables my people, myself, my daughter, and my sons to live.

Shavit seems to contrast the fight for survival on the one hand, with the quest for justice on the other hand. He suggests that treating the Arabs of Lydda justly would have led to the end of the Israel.

The first is from Professor Benny Morris, the Israeli historian who began to examine the events of 1948 and the creation of the Palestinian refugee problem on the basis of solid well researched archival material. In so doing he developing a complex and multi-layered narrative that challenged the prevailing Zionist versions of history that had been dominant in Israel up to that time (the late 1980’s). The piece brought here is actually drawn from two different sources by him. 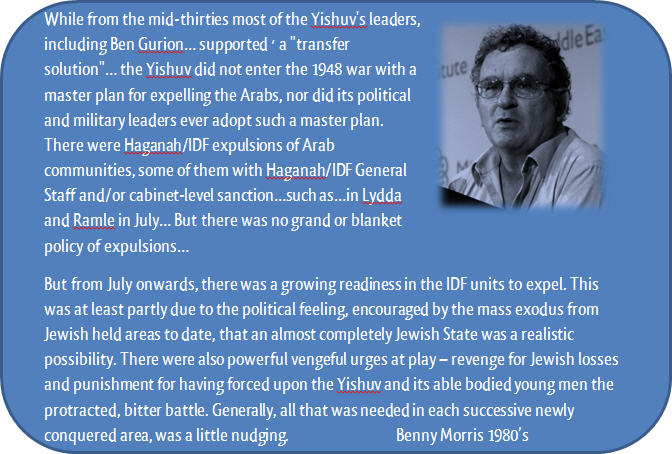 The second source is from the writer Aharon Megged. He rejects totally the works of the “New Historians” such as Morris. In a sense, he also asserts the difference Shavit raises: Between intention and outcome. 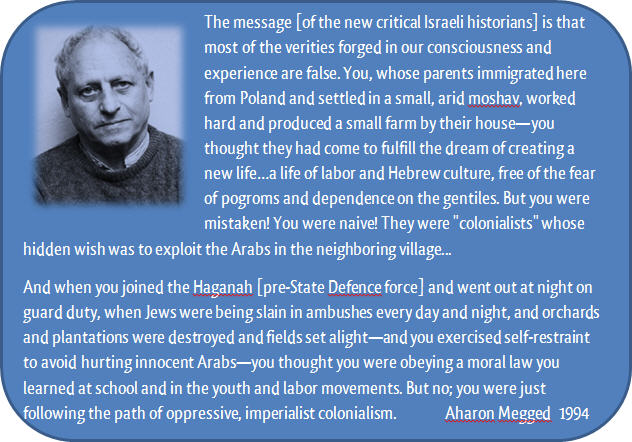 The third piece is from Professor Anita Shapira, an important professor of Zionism and Zionist history who does not identify herself as one of the new historians but who has related to the debate in an involved but dispassionate manner.