President Trump is a gift to Israel Education.

He has just signed an Executive Order to define Jews as a nationality.

Exactly as Zionists have been insisting for over a hundred years.

If it weren’t so real, it would be an amazing trigger for a great discussion program…

Before delving into this fundamental question of the Jewish People, let’s first acknowledge some of the politics at play.

It is true that fighting antisemitism, in particular on campus, has been difficult to enforce on a national level. This is apparently because Title VI of the Civil Rights Act of 1964  “prohibits discrimination on the basis of race, color, and national origin”. The problem is, since Jews are currently defined neither as a race nor color nor a nation, they are not legally covered by this statute. On the face of it, this move to define Jews as a nation allows the government to threaten to withdraw funding from institutions that do not fight antisemitism.

It is also true that this move has been characterized as the “height of hypocrisy”, coming from a President who has a terrible record on his response to racism of all sorts. Only a few days ago, his speech to the Israel American Council once again betrayed his own “rich selfish Jew” prejudices: “A lot of you are in the real estate business… You’re brutal killers, not nice people at all… But you have to vote for me — you have no choice. You’re not gonna vote for Pocahontas, I can tell you that. You’re not gonna vote for the wealth tax…”

More than this, contrary to Jonathan Greenblatt of the Anti-Defamation League, who has cautiously welcomed this move, many argue that the President’s Executive Order will serve to increase antisemitism. As former Saturday Night Live actress Michaela Watkins tweeted: “Uh no. No. This is antisemitism of the highest order… You, stupid crook president do not get to decide this so your white nationalist pals get to stick me in a concentration camp.” 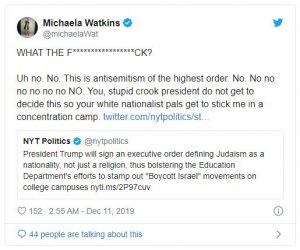 All this is quite apart from the concern that this might lead to limits on freedom of speech that critiques Israel.

The stakes are remarkably high.

However, from our perspective from outside of US politics, we have a different kind of question:

So the Jews should continue to be only defined as a religion? Really?

And if that is the case – quite apart from the difficulty of finding any common religious ground between secular, progressive, orthodox, and ultra-orthodox Judaism – where does the State of Israel come from?

Israel’s Declaration of Independence puts it right out there from its opening line: “Eretz-Israel was the birthplace of the Jewish People.” The entire document scarcely mentions the word religion. Our universal right to self-determination is granted to nations, not to religions. Back then in 1948, did the American Jews that rejoiced at Ben Gurion’s words see themselves as part of a different nation?

Well, in 1885 the Reform Movement made clear that Jews were “no longer a nation, but a religious community”, and yesterday, Congressman David Cicilline continued this theme: “Name: David Cicilline/ Nationality: American/ Religion: Jewish/ Get it now, Mr President?” 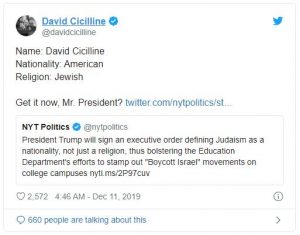 In the end, beneath the contemporary politics, there lies a fundamental question of Jewish identity you might wish to explore around a Friday night dinner table.

Make sure to have some good wine to hand!