This chapter focuses specifically on the Harod valley, (the south eastern part of the Yizrael valley), populated by a few poor Arab villages before Zionism arrived there in the Autumn of 1921. For centuries the valley had been sparsely populated and lightly farmed. A place of brackish water and disease. Shavit describes the new situation of Eastern European Jews and of Zionism at the end of the First World War.  The crisis of the former had become much more acute and the forces awakening in the Zionist movement had responded with more radical and widespread solutions, including the idea of large scale settlement in the Yizrael (Jezreel) valley, a valley that resonated with Biblical memory. END_OF_DOCUMENT_TOKEN_TO_BE_REPLACED

Masada in 1942 lies at the center of the chapter symbolically but Shavit’s narrative begins in the violent years of the Arab revolt of 1936 to 1939. These three years of almost unrelenting terror put Jew clearly against Arab and made it impossible for the Jews to maintain any kind of blindness to the Arab question that so many had exhibited up till then. In Shavit’s description, the 1936 campaign brought about a toughening of the Jewish psyche, a final realization that non-violent confrontation would be impossible.

END_OF_DOCUMENT_TOKEN_TO_BE_REPLACED

“Lydda 1948” takes us to another valley, the Lydda valley in the centre of the country and tells the story of the Zionist development of the valley from the first initiatives before the First World War through to the deportation of the inhabitants of Arab Lydda in the course of the 1948 war. END_OF_DOCUMENT_TOKEN_TO_BE_REPLACED

In chapter six, Shavit chronicles a time when the population more than doubled as hundreds of thousands of immigrants poured into the young country. The majority of immigrants came from great trauma, whether the trauma of the Shoah or the trauma of radical and sudden dislocation from Arab lands. Through four personal stories, three from central and eastern Europe and one from Iraq, Shavit leads us into the lives of some of the traumatised Jews who arrived in the country in these years. END_OF_DOCUMENT_TOKEN_TO_BE_REPLACED

Shavit opens his chapter on settlement by exploring the effects of the 1967 and the 1973 wars. The Six Day war of 1967 brought Israeli control of the territories and liberated a potential messianic force within the ranks of religious Zionism. The 1973 war was a war of deep trauma for Israel and the eventual victory could not change the deep discontent regarding the war, the government and indeed, the entire leadership. A malaise was revealed and the country went into a kind of spiritual tailspin. Many sought new directions and new certainties. It is in the contrasting but cumulative effects of these two wars that Shavit locates the roots of the whole settlement enterprise. END_OF_DOCUMENT_TOKEN_TO_BE_REPLACED

Similar to the settlement chapter, this chapter is structured around a series of conversations with central figures in the peace movement. At the center stand three leading figures, Yossi Sarid, Yossi Beilin and Amos Oz with others ranged around them. Shavit, who himself played a central role in that movement, becomes an active participant in the conversations, arguing with them and accusing them of misleading the movement by concentrating on the post-67 territories, and promoting the possibility of gaining peace in exchange for a return of the territories. END_OF_DOCUMENT_TOKEN_TO_BE_REPLACED 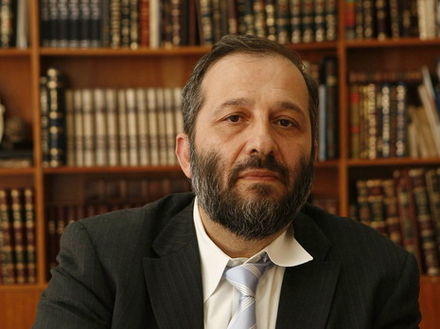 This chapter deals with the rise of the Oriental Jews (Mizrachim) in a process that began in the early 1970’s but rose to its zenith in the 90’s and the first years of the new millennium.  Most chapters in this book do not have one star figure, but in this chapter, there is no mistaking the star, Aryeh Deri, the founder and old-new leader of the Shas party, the traditional/Charedi Mizrachi  political party that first appeared in 1984 winning four seats in the Knesset, a number that had grown to 17 seats (450,000 votes) by 1999.

Shas was the first major Mizrachi political party.  It rode on a ticket of ethnic Mizrachi pride and traditional religious observance – everything that pre and early state Zionism was not. Deri, whose meteoric rise to power electrified the society as a whole, was later jailed for corruption.  Shavit’s story and interview with Deri tries to understand what that rise and fall represented to the community of non-Ashkenazi Jews in Israel. END_OF_DOCUMENT_TOKEN_TO_BE_REPLACED

In this chapter Shavit encounters the voices of the Arabs of the State of Israel. The central speaker here is attorney and activist Mohammad Dahla. Shavit and Dahla co-chaired the Association of Civil Rights in Israel in the mid-1990s. As Dahla shares his outlook in detail through this chapter, the gulf between these two friends on the legitimacy of Zionism and the viability of the continuing Jewish State becomes apparent.

Dahl makes a number of very clear points. He questions – and ultimately denies – any Jewish claims to historic continuity within the land.  Zionism is thus reduced to an invading colonial force which has come from the outside and imposed itself on the Arabs of Palestine. As a majority in the land, Zionism has imposed an alien regime.  It forgets that it is actually a minority in a larger Arab and Moslem world, a world growing stronger and larger all the time. Ultimately, he says, Zionism will have to change and will have to learn to share the land, relinquishing sole sovereignty for its Jewish inhabitants and working out a genuine power sharing arrangement with the Arab inhabitants.  END_OF_DOCUMENT_TOKEN_TO_BE_REPLACED

Continue ReadingEarly Ties I: Abraham in and out of the Land – 4