Similar to the settlement chapter, this chapter is structured around a series of conversations with central figures in the peace movement. At the center stand three leading figures, Yossi Sarid, Yossi Beilin and Amos Oz with others ranged around them. Shavit, who himself played a central role in that movement, becomes an active participant in the conversations, arguing with them and accusing them of misleading the movement by concentrating on the post-67 territories, and promoting the possibility of gaining peace in exchange for a return of the territories.

Shavit argues that the demand to give back the territories was indeed vital in order to preserve Israel’s moral health. However in no way should it have been linked to an assumption that such a returning of territory was capable of bringing peace. The diagnosis was wrong. The root problem he argues is not 1967 but 1948.

He argues that the leaders of the movement were too desperate to reject Dayan’s vision of Israel as a nation which would always be forced to live by the sword. For a generation looking for a life of normality, it would have been too hard to accept, and therefore, he suggests, an illusion was set before the public.

He finishes the chapter in Hulda, an area where Jews and Arabs lived relatively harmoniously till 1948 when another murderous attack on a Jewish convoy brought the decision to clear the area of Arabs and to destroy their villages. Ultimately, the root of the problem, says Shavit, is not settlements like Ofra in the territories. It is Hulda. Without solving Hulda, there will perhaps never be an end to the conflict. He doubts whether such a solution is possible for either side.

“I don’t love the land as I once did. I don’t feel I belong to the nation as I once belonged. In my nightmares I see millions of Palestinians marching to Jerusalem. I see millions of Arabs marching on Israel. I am well over seventy now. I have nothing to lose but the grave I will be buried in. But sometimes, when I look at my grandchildren, my eyes tear up. I am no longer certain that their fate will not be the fate of the children of Rafalowka [my parents’ Polish town].”

I worked out a theory. The theory assumed we lived in a tragedy: an almost eternal struggle between two peoples sharing a homeland and fighting over it. For seventy years we Jews had the stamina needed to withstand this tragedy. We were vital enough to be jolly and optimistic while enduring an ongoing conflict. But as fatigue wore us down, we began to deny the tragedy. We wanted to believe there was no tragic decree at the heart of our existence. We had to pretend that it was not by tragic circumstances that our fate was decided, but by our own deeds. The territories we conquered in 1967 gave us an excellent pretext for this much-needed pretense, as it allowed us to concentrate on an internal conflict of our own making. The Right said, “If we only annex the West Bank, we’ll be safe and sound.” The Left said, “If we only hand over the West Bank, we’ll have peace.” The Right said, “Our dead died because of the Left’s illusions,” while the Left said, “Our dead died be-cause of the Right’s fantasies.” Rather than face a tragic reality imposed on us from without, we chose to create a simplistic narrative of Right against Left.

On the one hand Shavit places Israel in the heart of an ongoing unavoidable catastrophe. On the other hand acceptance of this tragedy offers a way out of internal Israeli polarization.

Most literary definitions of the Tragedy genre would insist on the common element of “inevitability”. A tragic understanding of an event would assume that catastrophe was unavoidable. Shavit is insistent that the Israeli-Palestinian is tragic.

They saw that for the Palestinians the 1967 occupation was disastrous, but they did not see that for many Palestinians there are other matters that are far more severe and visceral than occupation, like the homes they lost in 1948.

It’s Hulda, stupid. Not Ofra, but Hulda, I tell myself. Ofra was a mistake, an aberration, insanity. But in principle, Ofra may have a solution. Hulda is the crux of the matter. Hulda is what the conflict is really about. And Hulda has no solution. Hulda is our fate.

“…without the steel helmet and the gun’s muzzle we will not be able to plant a tree and build a house. Let us not fear to look squarely at the hatred that consumes and fills the lives of hundreds of Arabs who live around us. Let us not drop our gaze, lest our arms weaken. That is the fate of our generation. This is our choice—to be ready and armed, tough and hard-—or else the sword shall fall from our hands and our lives will be cut short.”

The first is from Yitzchak Epstein (1862-1943), a teacher and writer from Rosh Pinah. Epstein was the first person to try and put the question of the relations between Arabs and Jews on the agenda of the World Zionist Organization. At that time he alone believed that the whole enterprise of Zionism would rise or fall on the relationships created with the Arabs in the Land. 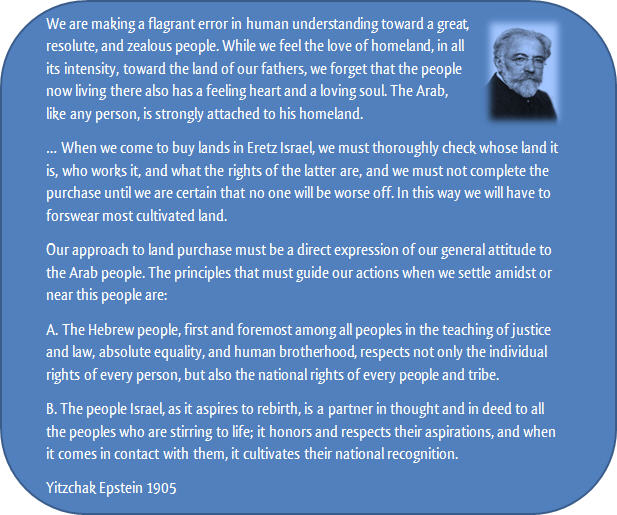 The second is from Vladimir (Ze’ev) Jabotinsky (1880-1940), brilliant orator and Zionist leader. He believed that the Arabs could not be “bought”, and would never make peace until they were thoroughly convinced that they could not contend with Zionist strength and that the Jews would be a permanent fixture in the Land of Israel. This is taken from his famous “Iron Wall” article in which he argued that the Jews would only be able to maintain a state by defending its borders as if it was behind an iron wall. 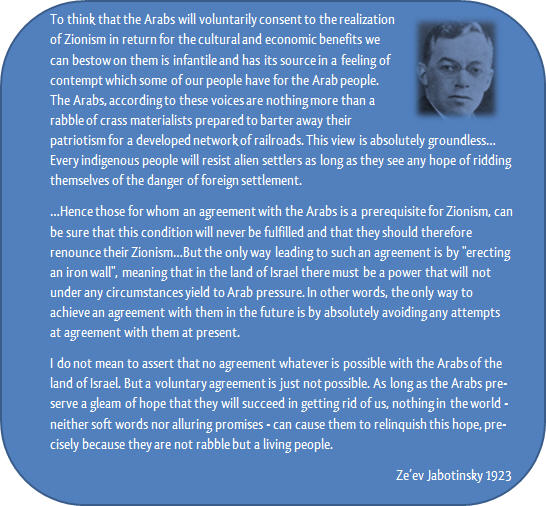 The third piece comprises the words of a very popular 1994 peace song called “Choref 73” – the Winter of ’73. It describes the feelings of those children born immediately after the 1973 war, and calls on the leadership to fulfill their promises and to do whatever they can in the cause of peace. The words were written by playwright Shmuel Hasfari (born 1954) and it can be heard in full here. 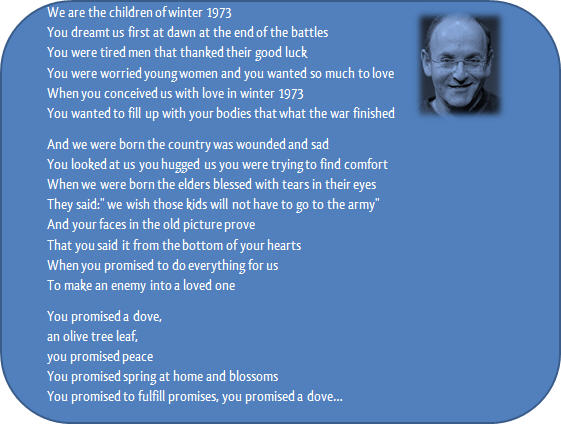