The official altitude of Mount Meron is 1,208 meters – it is Israel’s highest peak inside the ‘green line’.

My first observation made me proud and my second one less so. Near the beginning of the segment there is a suggested resting spot – perhaps intended for those who’ve continued from the previous segment. In the shade underneath the tree though there is no water or food, but instead, a collection of books! 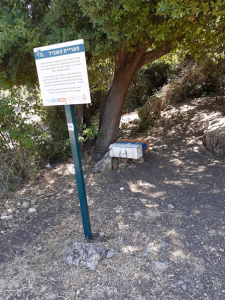 I was aware of this initiative – I believe by the Shalem college in Jerusalem – to leave a small library at different parts of the hike. The books are stored inside a case – actually a box that was once used to store ammunition – and people are encouraged to take and also leave books as they progress along the trail. If we indeed will even turn our swords into plowshares, this perhaps is a good way to start.

As for the second observation, and this has been true now for a few weeks in a row, the appearance of the ubiquitous COVID-19 face masks discarded in the most remote of locations repeated itself with increasing frequency. They are a significant percentage of the rubbish items on the trail. Of course, this is not a problem only in Israel and is a statement about the world we live in today, but it is still disappointing to see.

The ascent to the top of Mount Meron is possibly hinted at in the Rosh HaShana liturgy – we pass before G-d as ‘bnei Maron (or Meron)’. This may allude to being like sheep that pass without words before the creator, but may also allude to the winding narrow trail that over seven kilometers takes one to the summit of the trail. 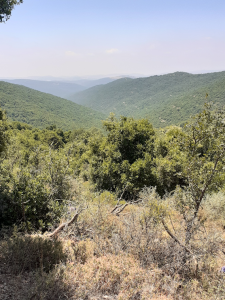 With breaks the continuous incline of the trail is surmountable – there is one kilometer in the middle that is a little brutal – and the fact that most of it is shaded also acts to moderate the challenge. For most, I would assume that the view at the top is meant to make the climb worth it. No picture will really show the breadth of the view – repeated in different directions at different viewpoints. It was possible even to see the summit of Mount Hermon, not a common occurrence in the haze of the midday summer days.

The descent from Mount Meron is marked by the visible and picturesque presence of the Druze community – and in particular its farmers – from the adjacent community of Beit Jann.

Perhaps a casual hiker would enjoy the new and unusual scenery without any sense of the underlying story that has been taking place here for decades.

But I already had in the back of my mind some sense of the ongoing and sometimes competing claims between the community and the state of Israel on the sensitive lands of Mount Meron, particularly since the mountain as a whole is defined as a nature reserve by the state.

And then just a few days beforehand I had seen on the news how some rangers who came to inspect buildings that farmers had built on their land were chased away from the land, leaving their vehicle behind to be destroyed by fire by angry farmers.

The Israel trail winds between the stone walls and fields of the farmers. On a non-political level, the farmers are definitely creative. Those working this land have built terraces for millennia in order to more easily mark off flat sections of land that allow for irrigation and planting.

Traditionally stones were cleared from the soil of the farm and then used to build the terrace walls.

Here on Mount Meron one farmer decided to use abandoned modern electrical equipment – mostly fridges and televisions – in order to mark off his farmland. Somehow here it didn’t seem to ruin the beauty of the nature around me. 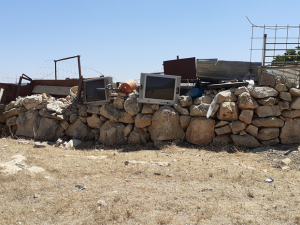 Most farmers have also chosen to fly both the Druze flag and the Israeli flag on their farmland.

Alongside one farm is even a memorial to a Druze soldier who fell whilst serving his country in the Israeli army. 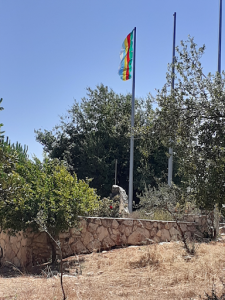 A memorial garden was later placed alongside it to remember all the soldiers, Druze and non-Druze, who perished in the helicopter disaster of 1997 close to the Lebanese border (in which 73 soldiers lost their lives in a terrible accident).

One of the guidebooks to the trail suggests the presence of the memorials here on this contested land is a statement of ownership and also of loyalty – and also suggests, perhaps cynically, that the memorial perhaps then justifies the placing of an access road, a water pipe, and so on. This allows the farmers to have easier access to their farms.

And then just when I thought that the intrusion of politics – and perhaps tension – was going to be left behind, I was aware of a small convoy of cars making their way along a dusty track, which was not intended for regular cars, and would soon arrive at the point I was at on the trail.

In fact, they slowed down as they arrived at where I was hiking and the driver in the leading car hesitantly wound down his slightly-tinted window. The driver in fact wanted to know whether the way from which they had seen me come was passable for cars, and if not, whether I knew of another way in which a regular car might find their way in the direction to Beit Jann, the community that I mentioned previously.

Though I briefly wondered why they were here in the middle of a field, and not some distance away on regular asphalt roads that are a perfectly good way to approach the community, I did my best to help them and pointed in a direction that my map showed should indeed lead to Beit Jann.

I’m not sure by looking at the photo who is more satisfied – me for identifying the head of one of Israel’s largest political parties in the middle of nowhere, or MK Aymen Odeh, head of the Joint List party, for having found a way (as I found out later) to get to a demonstration in Beit Jann and avoid the police on the main road that leads to the community! 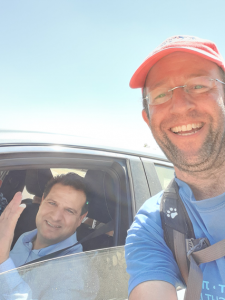 Now that the political episode of the day was over, I began the last part of the descent through more rugged terrain towards the community of Meron where I would end this section.

One passes here a wonderful geological phenomenon that occurs a number of times on Mount Meron – called I believe a ‘huta’, a word for which I couldn’t find an English translation. A deep pit that occurs due to the karstic ‘melting’ of the rock in parts of the Upper Galil, the one in the picture is apparently 42 meters deep. (I understand that some believe the word comes from the sound that Turkish tax collectors in centuries past would make as they were pushed over the side by the local aggrieved residents). Even fenced off, it is somewhat unnerving to peer over the side. 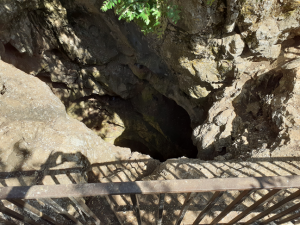 As the descent becomes a little steeper towards the end of the trail the community of Meron comes into view. For some, one of the holiest and most spiritual places in this land, due to it being the traditional burial place of Rabbi Shimon Bar Yochai, the presumed author of the core kabbalistic text, the Zohar, it seems appropriate that it is heralded by the appearance of a wonderful protruding rock, now known as the ‘seat of Elijah’ (you can see the community of Meron in the background to the right of the rock). 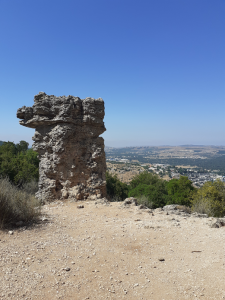 Tradition has it that Elijah, the prophet whose reappearance will mark the beginning of the redemption of the world, will rest on this rock as he makes his way into the Land of Israel.

From time to time, yeshiva students from the town of Tzfat come to climb to the top of the rock – perhaps just to check their own credentials as the one who will come to announce the redemption of the world.

In any case, since it is yet to take place, I made the final descent to Meron where, with a short diversion away from the trail, I would arrive at a bus stop that would even have a direct bus back to Jerusalem arriving soon.