I’m calling this day, ‘day 1’ of the Israel trail. But it must have been about twenty years since I first outlined to myself, and often to others, my ambition to one day walk ‘shvil yisrael‘, the walking trail that takes you the entire length of Israel.

Most of the time I imagined myself doing it as a ‘shvilist’ – taking six or seven weeks to walk the entire length, sleeping bag and rucksack on my back, camping under the stars, and not pausing until I reached my destination.

But recently I noticed that my 2003 edition of the Israel Trail guide had been replaced by five later editions and many route changes, the most startling of which is the extension of the length of the trail from 850km to 940km. I’m not getting younger and the trail is not getting shorter. (The longer trail is not a political statement of a ‘Greater Israel’ – the route has been altered to make it more adventurous. The entire trail lies within Israel’s 1967 boundaries apart from 2 kilometers, the second and third ones in fact).

So when I started walking, I had a new plan. I would hike one section each week. No sleeping bag, just provisions for the day.

Though there is nothing set about how long each section needs to be, I was planning my route in accordance with bus stops at the beginning and the end of the daily trek – it seems to work at least until I get closer to the deserts in the south.

And so it began. 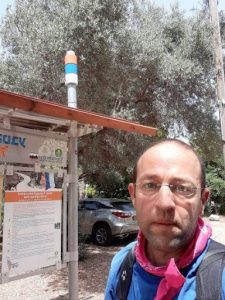 I’m not sure what I expected after waiting for so long to do something. As I found the official distinctive first marker (see photo) I considered saying the ‘shechiyanu’ blessing that reflects gratefulness at arriving at a particular moment in life. I wondered, though, whether it’s best saved for the end of the trek, so I pushed off that dilemma for somewhere down the line.

The hike begins on the edge of Kibbutz Dan – at the Beit Ussishkin museum. Soon enough I was walking around the outside of Tel Dan, the boundaries of the Jewish kingdom the last time it reached this far north three thousand years ago.

The first three kilometers were easy. In less than forty minutes I was already into the fields bordering Lebanon and I calculated that at this rate I would have finished the entire trek to Eilat in less than 12 days – without sleeping.

At the point where the trail comes closest to the Lebanese border, it swings into the Snir national park. The national park is one of the only places where one needs to pay an entry fee to continue on the trail – though there is an easy detour if one wishes to avoid the fee.

After stopping for a picnic lunch alongside a number of families who had come to do the one-kilometer trail inside the park – I resisted the urge to tell them I was doing an additional 939 km – I continued alongside the Snir stream.

I allowed myself a short detour from the trail to the highest point inside the national park with a stunning view of the Hula Valley (see photo). 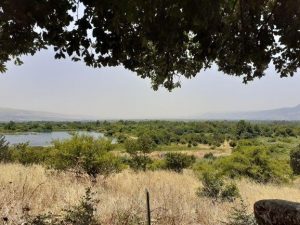 The trail then continues alongside the stream and sometimes inside the stream. This was my slowest kilometer of the day as I removed my shoes and socks and carefully made my way through the water and rocks that made for a beautiful refreshing change of pace.

By the time I emerged from the boundaries of the park I was well into the second half of the trail distance I had set myself for the day. The trail was a little less dramatic as it made its way along small country lanes and fields between Ma’ayan Baruch and Yuval. It was in these fields that I passed three young men resting. I joined them for a moment in the shade but I didn’t want to spend too much time talking to them. I was jealous. They were real ‘shvilistim’ – with sleeping bags and miniature cookers on their back – who had also started walking that morning. Though even they admitted they weren’t going to complete the whole trail in one go, which made me feel a little better about myself.

And then soon enough I was ready for the final – and only real – ascent of the day to Kfar Giladi. I paused for a moment in the minimal shade of some bushes alongside a road that the trail emerged onto. Within a couple of minutes, a concerned driver stopped to ask if I was ok and if I needed help. I definitely felt tired, more tired than I had anticipated, but I didn’t know that one day on the trail would radiate such distress. In truth I was fine and I let the driver know. And then I climbed up to Kfar Giladi. 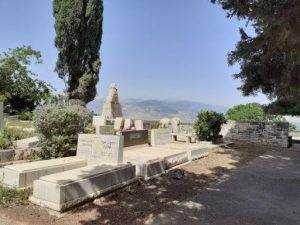 The first day’s trail for me ended in the cemetery alongside the Roaring Lion Monument that was modern Zionism’s first public grappling with memorializing loss (see photo). The Battle of Tel Hai and the deaths of eight Jewish fighters here one hundred years ago. I’ve spent a quarter of that last century figuring out how I would begin this trek and now I have begun I hope I appreciate a little more that the freedom I have to do so was bequeathed in some way to me by the people in the cemetery behind me.

My appreciation was realized I have to admit in a much more immediate way by having an opportunity to refill my water from the taps available as one exits a cemetery. At which point the trail crosses exactly through a bus stop and with somewhat surprising timing my bus (which runs only three times a day) to Kiryat Shmona arrived a short time later. I looked around and made a mental image of exactly where I would place my feet when I began the next section one week later.