I was trying to figure something out as I prepared for the trail this week – why has it become such an important and meaningful – and exciting – part of my life?

This is some of the answer, at least the part I’ve understood so far. I’ve lived in Israel for over two decades, by profession I’m an educator of Israel, and in my capacity as an official tour guide, I do spend a fair amount of time out and about in this country.

So, on one level I’m simply excited to do something new. I haven’t exhausted – and never will – my discovery of this land and its people/s.

And when I hike, I’m discovering new parts of a land on a very physical level that I’ve never seen before.

The story of this land is connected to its geography – its valleys and mountains – and I set out in the morning and I don’t always know what’s around the next corner.

And for me, it’s exciting to discover something new – even after over twenty years of exploring.

In fact, I try not to ‘over-prepare’ before each section, so that literally I sometimes don’t know what’s around the next corner.

And then I think there’s also something a little deeper. Because of my profession, I spend – and I enjoy spending – a lot of my time mediating Israel experiences for curious visitors to this country.

In doing so, I, and those building the programs, need to figure out where those visitors are at.

What do they need at the point in their own journey that will help them understand this country better?

Of course, I’m also often challenged personally by my work on these programs, but the journey is not for me. It’s for them.

And this one’s for me. It’s meeting me where I’m at. A purpose-built personally designed Israel experience exactly meeting the client – me – where he wants to be challenged right now! And I haven’t been this invested in my own Israel journey for a long time. I still don’t know exactly what I’m going to discover on the way – about me, about the land, about the people – but I think I’m working out why it has become a meaningful part of my life so quickly.

So, with all that said, within literally one minute of getting off the bus opposite the Koach fortress, I was presented with the intriguing site of Nebi Yesha. 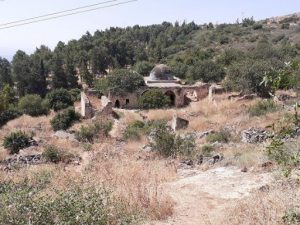 My visits to this remote junction have been infrequent, but I’d never been aware of how hiding so close but just behind the bushes in a slight depression is the traditional Moslem burial site of the prophet Yesha – or Joshua bin Nun as the Hebrew bible remembers him. Of course, as with all places of memory in this country, there are competing narratives that each visitor will emphasize when they come to this site. So this crumbling building which still remains hauntingly beautiful is set in the middle of a village whose Arab inhabitants – and caretakers – haven’t been present since Israel’s creation in 1948.

Nevertheless, a locked room remains at the heart of the complex, and peering through the bars one can see that someone has attempted to give some kind of dignity and respect to this ancient tomb. 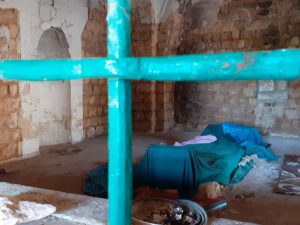 Some thin cloths covering the grave and evidence of candles being burnt, as well as the ‘mikhrab’ on the southern wall proving the Moslem credentials of the Moslem builders of this mountainside mausoleum.

But in this land of competing memories, I perhaps should not have been surprised to see the sign in the next picture rather conspicuously tacked onto one of the outer walls of the shrine. 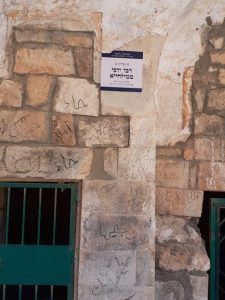 While it seems that the building has finally found aspiring new caretakers, though with apparently little intention to blend in, we are now told that the tomb is in fact the burial place of Rabbi Yosi, a rabbi of the Talmudic period (second generation ‘amora’ / explainer) from nearly two thousand years ago. It seems that Joshua bin Nun, the man who led the Jewish people into freedom in the Land of Israel for the first time, wasn’t a strong enough Jewish claim on the credentials of this site to be ‘ours’ and there are some who felt only through a rabbinic personality (with whom most of the Jewish people themselves are not familiar) that we were now redeeming the memory of this site from those who had ‘in their error’ claimed it for their own (Moslem) tradition. I set off wondering what I’ll find around the next corner…

Just before I turned to the west, I made a steep ascent to the ‘horn of Naphtali.’ With a view from the Hermon to the Kinneret, it was in fact the British who first carried out a modern mapping of this land using the scientific tools available to them. As such, they left behind here a ‘trig point’ – literally a triangular structure which allows for the measurement of distances and heights of the surrounding terrain. 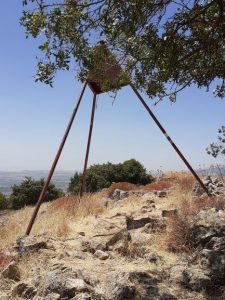 It was probably clear to them, as it is even to the untrained eye today, that it was placed on the yet-to-be-excavated remains of an ancient building – I understand from my reading that it is probably a Hellenistic Temple.

Today a small Israeli army look-out post stands just off the summit of the protruding horn of the mountain ridge. I guess that once again each uses the same mountain for their own purposes.

As in previous weeks, I was stunned by the beauty – and relative isolation – of this section of the trail. 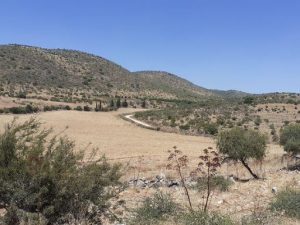 Soon I was in the Yachmor Valley – a place you can really only get to on foot. It’s almost like a crater or bowl in the heart of the mountains and as you cross this wonderfully green (or brown at this time of year) terrain with no human structure present, I was grateful to the trail makers for bringing me here. In fact only when I saw a surprisingly large deer cross the hill a few meters in front of me did I make the connection that ‘yachmor’ in Hebrew means (fallow) deer.

Leaving the ‘deer valley’ behind, the trail proceeds into the canyon-like river bed of the Dishon Valley – a 35-km-long river bed that drains the eastern peaks of the upper Galil. 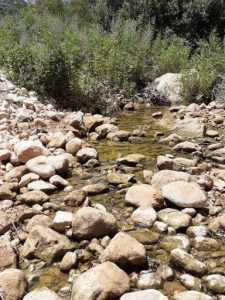 Today’s trail was going to end for me near the Alma bridge. I saw on my map that if I continued just a few hundred more meters that there was an unmarked trail that made a steep ascent into the community of Dishon.

And indeed, after walking for another ten minutes, off to my right there was a very basic path beaten up a very steep hill towards the Dishon community.

After a short climb, the houses of Dishon came into view. I already anticipated that since it is just a few hundred meters from the Lebanon border, it would be surrounded by a fence. I wasn’t sure how much further I would have to walk around the community to find a way to enter. But today I was lucky! As the steep trail came up to the fence there was a gate. Closed, but not locked. Perhaps placed to allow the people of Dishon access to the valley I had come from. And just inside the fence was not only a bus stop but also the village shop selling ice cream! Now all I have to hope is that the same gate in the fence will be unlocked when I arrive back here next week…