By 10 am (I had left my home in Jerusalem at 6 am), I was back at the marker where I finished my hike last week next to the Kfar Giladi cemetery. If, after hiking in this country for more than 20 years, you asked where it is possible to hike for a full day and not see almost anyone and not cross a road, I would tell you that it was possible only in the desert in the south. I would have been wrong.

The twenty kilometers across the Naphtali mountain range was to be six hours of walking in the most wonderful isolation – and also beauty.

20km along forest trails, six and a half hours of hiking, and over 300 meters above the cars below is an experience that makes you reevaluate just how the finger of the Galil is really a bonus that the British snuck into the borders of Palestine. The ability to wander – and wonder – through nature for such a prolonged period of time in the north of the country is not something I’d anticipated. 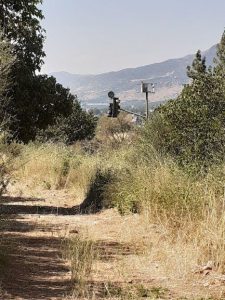 Here’s a quick picture of something you probably won’t see unless you take the trail – an art installation of the outskirts of the Tel Hai college at the very beginning of the trail. It included the traffic light (in the picture) in the middle of the field.

It looks like it’s taken a battering over the decades, but it is still somewhat incongruous and is possibly a statement about how used we are to seeing traffic lights when going from one place to another – as opposed to walking or navigating our way.

A very pleasant morning’s walk circling around – and way above – Kiryat Shmona brought me to the archaeological park lookout. I knew I still had over half the distance to cover for the day but the appearance after six kilometers of solitary walking of two other hikers persuaded me to stop for lunch. 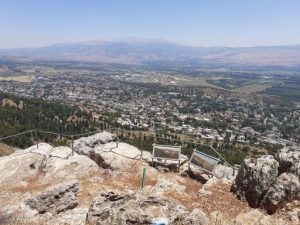 It was clear they were real ‘shvilistim’.

Nevertheless, we had much in common. We were both on the second day of our hike. Mine spread over two weeks, theirs over two days.

We both were hiking because of Israel’s closed skies – them because they wanted to leave for the ‘big trip’ after the army, me because my business relies on incoming tourists who couldn’t come into the country.

And just to prove how much we had in common – the grandmother of one of the hikers lives a 2-minute walk away from where I live in Jerusalem! I was on a tighter schedule because of my return trip to Jerusalem, so after an early-ish lunch, I wished them luck and made my way on.

There’s a long central section to the walk today. Accompanied all the time by the views of the Hula Valley. 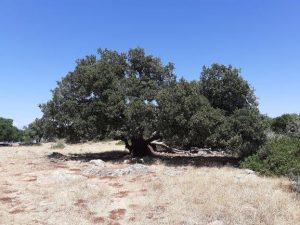 One moment of this long section that I note here is the appearance of a spectacular tree that seems to belong in a movie like Shawshank Redemption. It sits in a small hidden plain where the steep mountains suddenly straighten out for just a minute before continuing their spectacular descent to the valley floor. You would have no idea it was here from down below on the road. Next time I return I’ll have lunch here. And bring a book. And possibly find a hidden box with money that would get me to Mexico.

To me, it was reassuring, but the concrete Tegart fortress in the distance must have seemed frightening to the Jews of the Galilee when it was handed by the British to the Arabs as the British prepared to depart the country. In the many battles that were fought to take it under Israel’s control, 28 Jewish soldiers died – the fortress was renamed the ‘strength fort’ since the numerical value of the Hebrew word for strength is 28. The fortress itself is in fact now the emblem of the soldiers of Israel’s army unit that is called ‘the border police’.

And now I could see it as a marker for the end of this section of the Israel Trail. And then all of a sudden, just when the fortress was a matter of a few hundred meters away, the trail darted down into the deepest of the valleys that cut the Naphtali range, the Kadesh Valley (see picture – looking down the descent). 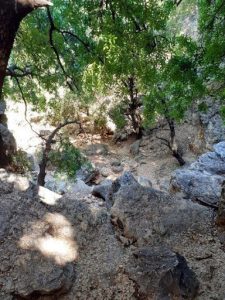 Surely my destination was so near and my legs were not in a great situation to be negotiating deep drops in a dark valley with no one within earshot?

Why could the trail planners not just take you along the road to reach the fortress within a few minutes? But of course, that raises the question about the entire trail – if I wanted to walk to Eilat then I could just do it straight down the Jordan Valley and cut the trail distance in two. Since the trail planners want you to get a taste of the Kadesh valley, I of course would fulfill their wish – and try and be grateful for the opportunity.

I had to increase my pace – my bus off the mountain range would be coming soon and the next one was not until after dark three hours later. So with a last and hurried (and careful) effort, I climbed out of Nahal Kadesh, hurried around and past the memorial at the fortress of strength (still an army base today), and stumbled out on to the road at the point where the trail passes literally through a bus stop and where I would rejoin it next week.