It’s been a long commute to get to the beginning of this fourth segment – actually slightly longer (by bus) than the previous week which is counter-intuitive and also psychologically a slight blow because I should be getting nearer Jerusalem, my home town. But once I’d scrambled down the steep hillside, crossed the running Dishon river, and arrived at the trail maker I’d left a week earlier, I definitely felt a sense of satisfaction and progress before I even began hiking!

It would be fair to say that the trail this week was somewhat less spectacular than in previous weeks. Though to be fair, the competition was tough. Nevertheless, it was a very peaceful hike in one of the most remote parts of the country. Mostly a gentle uphill, the majority of the day continued along the Dishon stream. The rock formation was home to many rock hyrax which far outnumbered the people I would see today. 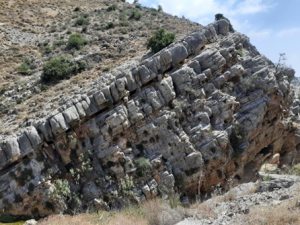 This section of the Dishon stream has actually been fenced off in such a way that there is no jeep access – as there had been in the previous section – so my chances of seeing anyone else this week were always going to be minimal.

A sign at the exit of the official reserve announced that the water that runs through the stream is a result of the practical effects of fairly recent Israeli legislation that demands the return of water to its natural courses in the country. It was great to see this legislation in action, as it were – and if I had entered the Dishon stream at this end I would have been less surprised to see running water.

The second half of the day takes one into the Baram Forest – apparently preserved due to the traditional protection of the forest by the Maronite church.

This really is the Upper Galil at its most remote and in some ways its most untouched.

I was curious to see a tomb ‘hiding’ off to the side of the trail – with no apparent reference to it on a map or mention in a guidebook. Of course, the Galil is not lacking in traditional burial places of sages from the Jewish past, but to my surprise, this was a big one. 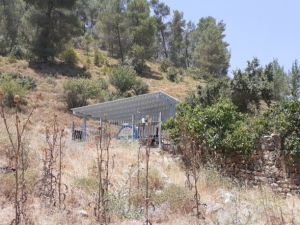 The claim on the tombstone was no less than that this was the burial place of the biblical prophet Isaiah!

I read it carefully to be sure – he is of course one of the most important characters of the past, and in some ways the future, in both the Jewish and the Christian tradition. But it was definitely him. Or at least it claimed to be. Isaiah, the son of Amotz.

And here I was – completely unprepared (and in a sweaty old t-shirt) – standing alone in the presence of such a towering and dominant figure of religious history.

Then I remembered that I’m not hugely connected to visiting graves, particularly when the tradition of the burial site is unproven. I think I was just excited for a moment about the discovery that it was even an option that here the prophet found eternal peace. (I did a little digging around, as it were, when I got home. The tradition – and logic – of Isaiah’s burial in the upper Galil is actually predated by a much older tradition that his burial site is in the caves in the hillside where the community of Silwan is in Jerusalem today. I was unable to ascertain when this alternate Galil burial site came into being – or in fact, a third option that I understand is in Iran…).

The last part of my hike was marked by my first real navigational error. As I made way further into the Baram forest it literally envelops you and progress is dependent on carefully following the distinctive Israel Trail markers (a 3-colored blaze as opposed to two colors used on all other trails). I guess I was somewhat complacent and took as my cue the contour of the now-dry river bed of the Dishon stream that I had been following for much of the last two walking segments.

A map and forward-planning are indispensable parts of hiking even on a well-marked path such as the Israel trail. And since I knew that the Dishon stream was accompanying me for most of the day, it made sense to stay with the riverbed as I entered the heart of the forest. But it had been a while now since I last saw an Israel trail marker.

Eventually, having made a not inconsiderable ascent already, I sat down and opened my map (remember – always take a map!). I was following the Israel trail that is marked on the map by the thick orange color that goes from right to left across the map – in a south-westerly direction. (I know I have already lost some readers – take a map and someone who knows to read it!). I knew that I had passed the section where black trails intersected with the Israel trail. And now as I looked carefully, I saw that just past this intersection that Nachal Dishon (written in Hebrew) does indeed continue south, but it is no longer a marked trail.

It’s never a good idea to be in an unmarked river bed – for all kinds of reasons. But I had progressed – and ascended – a long way since I must have made the wrong turn. I checked and saw on the map that up ahead there should be a path that would reconnect me to the trail. And indeed soon I would find it, though not without a little searching at a point when I was feeling the heat and tiredness of the day.

Once I reconnected with the real trail, I did consider walking back along the part I ‘skipped’ in order to be able to say that I hadn’t missed any sections. But I figured that since I had fairly significantly extended my hike (note that the length stated in the title line is without this diversion included), that the Israel trail actually owes me. And not the other way round. So I’m going to keep my promised debt repayment until I really need to redeem it and then me and the trail will be even again. 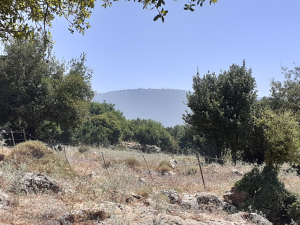 As I finished by making my way the short distance from my endpoint at the ‘Sasa bend’ off the trail to the nearest bus stop outside Tzivon I had a great view of what awaited me next time – the ascent (and descent) to the tallest peak on the trail, Mount Meron…