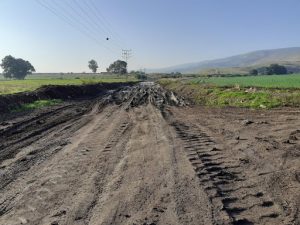 Mud. Lots of it. Plentiful winter rains that have left their mark on the most luxurious of green fields. Overflowing streams with no way to traverse them and stay dry. And the longest hike so far – a little over 25 kilometres on the most glorious ‘winter’ day. It seems to me that today is about as good an advert for the Israel Trail as you can get.

It all started with a slightly different challenge – up to now finding the right number of daylight hours in order to avoid the heat had been my main difficulty.

This time I knew that the favourable temperature would allow me to hike throughout the day.

My challenge was to find, in the middle of the winter, enough daylight hours to complete a long and strenuous (and fairly remote) section – and not get stuck somewhere in the dark.

The beginning of the trail was not so easy to get to from Jerusalem, and with light fading at this time of year from about 4pm, I decided again to stay overnight somewhere near the beginning of the section. That way I was ready at 7:30am in the morning, having slept in Tiberias, and back at Yardenit and full of anticipation for today’s adventure.

The first half of the day takes one from close to the shores of the Kinneret Lake and under sea-level, up into the lower Galil and the area known as the hills of Issachar.

It seems to be relatively unknown even to experienced Israel-hikers.

For me it was certainly a part of the country that I hadn’t explored on foot before. Part of the challenge for the more casual hiker is that there is no obvious ‘escape’ or short-cut that would turn this part of the world into a more manageable experience. (Often hikes that people do as a group cater to a broader audience and it is necessary to find a distance and level of challenge that a trail of a more moderate distance would provide).

The remoteness – and lack of accessible roads – means that this particular section seems to be an ‘all or nothing option’. And having done almost ‘nothing’ of this route in my previous hiking, I was delighted today to have an opportunity to do it ‘all’.

Truth is, for the first couple of hours I remained quite anxious, despite my relatively early start, about completely the distance during daylight hours.

The terrain was a little challenging, the mud made it a little slow-going, and the trail wasn’t obvious in a number of places. I kept re-calculating in my mind, according to my average speed and distance, how much time it would take me to cover the remaining distance.

It was a little bit like using ‘Waze’ and seeing your destination time getting later and later. Combined with the fear of running out of petrol/gas – in this case, physical energy – before you reached your destination. 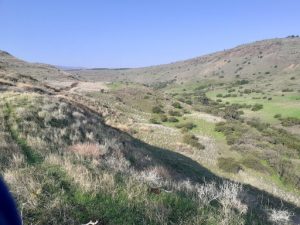 Despite all of that, the ascent through the Yavniel valley (pictured) was invigorating – physically and spiritually – due to its beauty at this time of year, and also due to the adrenalin of the feeling of being completely alone in such beauty.

For many hours I was ascending. Always ascending. Of course, I had started at the lowest lake in the world.

But nevertheless, as I came close to the 10km distance mark, it seemed a little more than I had expected. 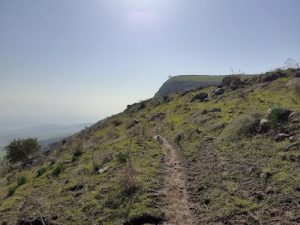 I guessed that the tree (hanging off the edge of the cliff in the distance in the picture) that came into view must be somewhere near the peak of today’s ascent. And indeed it was.

It was perfectly placed to mark both the end of the morning’s climb, but also to offer one indescribable view back over the eastern border of Israel and the Syrian-Africa rift valley which had accompanied much of the nine sections of the trek so far (the Hula valley, the Kinneret, the upper Jordan valley).

It seemed almost placed in such a way that it was saying ‘farewell’, knowing that one would now separate as one headed west onto the Mediterranean coast of Israel. But also knowing that in many hundreds of kilometres time we would meet this valley once again when we came to the Arava in Israel’s southern desert.

I took my time to bid farewell – the valley had been kind to me – and sat down under the tree, had lunch, and recalculated in the ‘Waze’ in my brain what time I would finish the hike today.

It was a little strange to think that I had hiked over ten kilometres (and a little worrying that my legs were a little tired) and that I still had over half the hiking distance to cover after lunch. But I understood from the view – and my map – that I had turned a corner. Or crossed a peak. And that now I was in the relative heights of the lower Galil, in the Issachar hills, that the rest of the hiking would be much gentler.

The pace became much quicker as I made my way through the fields of farmers who must come from distant places each day to work their crops. As the kilometres passed, the midday warmth soon turned to the coolness of the afternoons in the Israeli winter, even with the sun still relatively high in the sky. I was less concerned by the time now. The trail felt a little less remote as the hours passed, as my afternoon’s hiking followed the Tabor stream and the first communities of the lower Galil started to appear at the edges of the trail at various points. 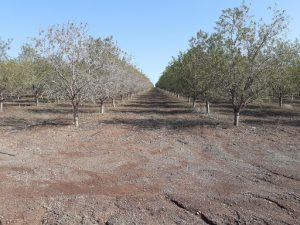 The Tabor stream in fact had a surprise in store. On three different occasions, just as I was tiring towards the end of the day, the trail crossed flooded parts of the stream, where despite my best attempt to search for a dry route, there was no avoiding crossing the running water. 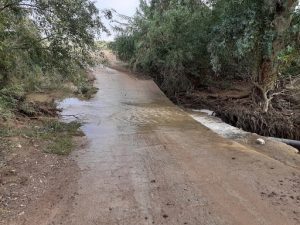 I was upset with myself for feeling any kind of resentment about the plentiful winter rain. But it was a little annoying each time as I removed my hiking boots and socks, crossed barefoot, and then sat on an uncomfortable rock and tried to dry my feet as I redressed with my socks and shoes. Most frustrating was not knowing how many more times I would have to repeat what became almost a ritual. But it was a nice encounter with nature and moving to see and feel how much the seasons had changed since I was hiking, just a couple of sections previously, in the quite difficult heat of the Israeli summer.

Nearly there now. I watched with some sense of self-satisfaction as the twenty-five kilometre mark came up on my Garmin watch. It was still daylight, and though the shadows were long, I was finally able to fully relax knowing that I would not end the day in a pitch-black valley groping under the stars for an indication of the Israel trail markers. 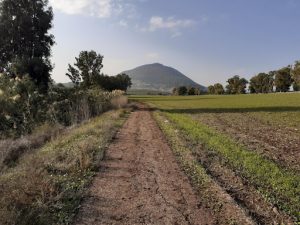 The last few kilometres were a little monotonous as the trail follows an unkempt biking trail in the direction of the main road that passes across the lower Galil, route 65, or better known by the ancients as the ‘via Maris’, and where I would finish this section. In front of me started to loom the Tabor mountain that I would ascend, and descend, during the next section.

But for now, I was ready to rest my legs and looked forward to starting afresh when I would return to the valleys and hills of the lower Galil.