How times have changed.

In the past two months, the IDF has been rocked by a scandal that is hard to fathom. At first, four soldiers in an officer’s training course walked out of an evening of entertainment which included female singers, because their rabbis told them they were not allowed to participate. From there, diatribes both supporting and condemning the soldiers have appeared in the press, with the strongest statement being made by a religious Zionist rabbi who argued (in some distorted manner) that it is better for a soldier to die that to be in a room when a woman is singing.

The US Secretary of State, Hilary Clinton, has gotten (peripherally) involved in the fray, as the issue of woman singing is connected, at least on the philosophical plane, with other areas in Israel where women are being excluded or sidelined. These include the institution of separate buses for women in ultra-orthodox neighborhoods, the removing of women from advertisements, and the creation of separate lines at government institutions.

Clinton suggested that the treatment of women in Israel is similar to the way they are treated in Iran.

And now, one of Israel’s top caricaturists, Shai Charka, has captured the sensibilities of the general community in a comic where he tries to bridge the notion that somehow women’s singing will lead to lewdness and sexual immorality. 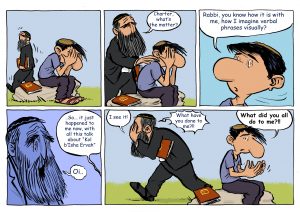 The truth is, when it comes to soldier’s sensibilities regarding women singing in the army, I am somewhat torn.

On one hand, I feel strongly that many rabbis who have taken a fundamentalist position regarding “kol isha” (the rabbinic term for the tradition that men do not listen to women singing), are acting in a duplicitous manner. They tend to ignore the pluralism latent in Jewish tradition in general and on this issue in particular.

But moving beyond the halacha, even if one adopts the position that Jewish tradition frowns upon men participating in events that include women singing, it is unquestionable that the context of the army which seeks to increase morale, provides a positive counterbalance which may offset any extremist approach.

Moreover, I find it unconscionable that rabbis who are issuing statements justifying soldiers ignoring their orders by leaving entertainment venues have themselves participated in national celebrations where women performed.

And yet, I am still torn.

It is possible that the soldiers have been poorly educated, and it is equally possible that their rabbis are distorting their approach, but I still believe that there is a need to respect them, even if I think they are wrong. And so, I differentiate between the post and ante facto situations.

The army has a responsibility to understand and respect the religious convictions of its soldiers, even if that means restricting to some extent the nature or scope of entertainment possibilities and – and this is critical – as long as the understanding and respect doesn’t challenge the integrity or capability of the army to perform its duties.

On the other hand soldiers need to follow orders, and they need to be educated to do so. If one is ordered to stay in the room, one ought to understand that parameters of Jewish tradition enough to know what the right thing to do is.

For now, women’s singing is dividing us. But I’m hopeful that we can move from crisis to conviction. There is too much at stake in Israeli society in general to allow this debate to continue. We need to examine, understand, appreciate and integrate, for the sake of Jewish unity.

We cannot – and should not – stop women from singing in the army, or in other contexts. But we ought to find a way that even the soldiers who find this uncomfortable, can still be full members of our armed forces.