Masada in 1942 lies at the center of the chapter symbolically but Shavit’s narrative begins in the violent years of the Arab revolt of 1936 to 1939. These three years of almost unrelenting terror put Jew clearly against Arab and made it impossible for the Jews to maintain any kind of blindness to the Arab question that so many had exhibited up till then. In Shavit’s description, the 1936 campaign brought about a toughening of the Jewish psyche, a final realization that non-violent confrontation would be impossible.

At the same time, Jews in Palestine became aware of the developments in Europe. As the Nazi armies rolled through North Africa, many of the leaders began to fear a full scale attack on the Jews of Palestine. A consciousness begins to develop that there is a need for the new harder Jews of the country to prepare for war both against the Arabs and the Nazi forces.

In that climate, and largely because of the work of one man, Shmaryahu Gutman, Masada developed as a rallying point and a symbol of preparedness for the tough times ahead.

Gutman trained groups of youth movement leaders to scale the mountain and to learn Masada’s story of the last Jewish rebels who had chosen suicide over slavery as a last defiant act thousands of years previously. These youngsters, carrying out dramatic night time ceremonies in which they swore loyalty to the mountain and to their fellow Jews, would be the guardians of the nation, toughened on the events of the 30’s and the early 40’s. It was their task to forge themselves into the human weapon that would ensure that Masada would never fall again.

Faced with an Arab threat and a Nazi threat, it is clear that without the use of force, Zionism will not prevail. It will go down in history as yet another movement of false messianism. That is why the youth of Israel must be prepared. Only the sons and daughters of Zion can save Zionism from utter destruction.

The more I learn about them, the more distant they seem to me. In an era of criticism and cynicism and self-awareness I find it difficult to truly comprehend the cadets’ state of mind as they prepare to climb Masada for the very first time. Yet I realize that this paradox is exactly the essence of the Zionist Masada…What Gutman is doing in bringing this young, idealistic group to this desert ruin is using the Hebrew past to give depth to the Hebrew present and enable it to face the Hebrew future. In order to achieve a concrete, realistic, and national goal, Gutman imbues the fortress with a man-made historically based mysticism.

It is not Ben Yair who defined Masada, it is Gutman. What matters is not the event that did or did not take place on the fringe of history in … 73, but the event that does take place in…1942. For the Masada ethos put forth by Gutman would define the Zionism of the 1940s and would decide the fate of 1948 and would shape the young state of Israel.

The first is from the famous speech of Elazar Ben Yair, the leader of the Zealots of Masada as he calls on the Jews to commit collective suicide rather than fall in slavery to the Romans. It is this speech, taken from the Josephus account of the last episodes of the Jewish war against the Romans after the fall of the second Temple, that became a mythical element in the Zionist self-perception from the mid-1920’s onward. 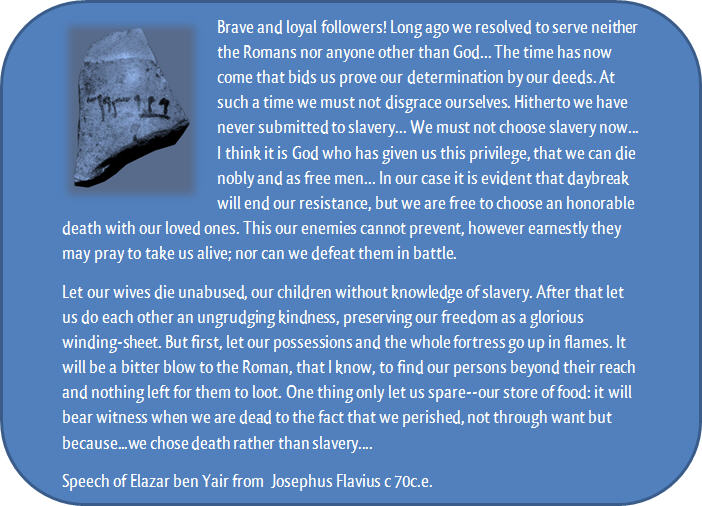 The second source is taken from the poem “Masada” written by the Ukrainian born Jewish poet, Yitzhak Lamdan (1899-1954), who had come on Aliyah at the beginning of the 1920’s and who wrote his epic poem in 1927, inspired by the terrible Ukrainian pogroms after the First World War. In the poem, Lamdan called for Jewish victims from all over the world to converge on Masada for the last stand of the Jews. The poem began the rise of Masada to its mythic place in the Zionist story. 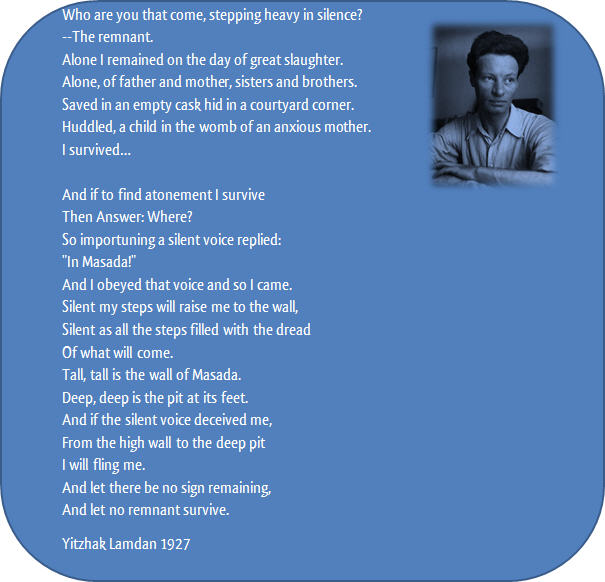 The third piece is a description of a tiyul (trek, hike) to Masada by Meron Benvenisti, Israeli writer and intellectual who describes himself as being, in his youth, one of the “High Priests” of the cult of Masada in the 1950’s. It describes briefly the extreme “ritual” that surrounded the hikes to the mountain fortress. 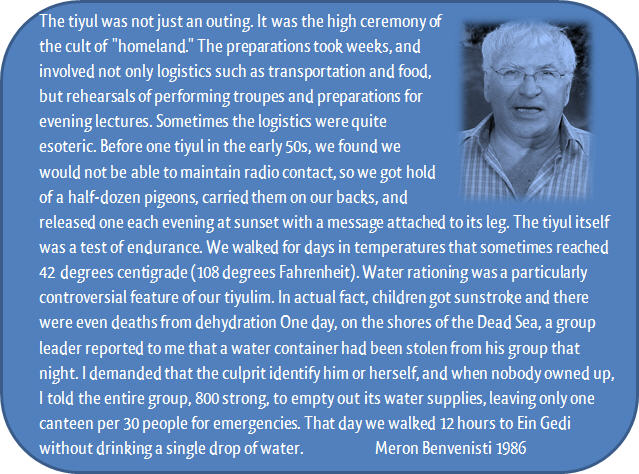 Go to the next conversation: Third Conversation Chapter Five: Lydda 1948