If the results of the diaspora poll were reflected in the Israeli vote on April 9, Israel would be a different country today, especially in regards to relations with Palestinians and issues of religion and state.

The Makom diaspora poll conducted in the month before the elections of the 21st Knesset collected responses from 594 Jews across the world, of which 43% from the US, 22% were from Canada and 13% were from Australia. Whilst the sample size was small, it revealed some fascinating results. With 76% of respondents being graduates of Israel programs, and 58% having a good or excellent level of Hebrew, the Makom sample aimed to reflect the political outlook of diaspora Jews who have close connections to the Jewish State.

The most standout result was the difference in support for the Likud in the two polls, where Israelis gave the party 35 seats, whilst the diaspora only gave them 15. In an election campaign where the issue that dominated all others was the suitability of Netanyahu to continue leading Israel into his fifth term as Prime Minister, the difference tells us much about how polarizing the Likud leader has become.

As David Horowitz noted in his post-election editorial for the Times of Israel, Israelis “knew that Benjamin Netanyahu was facing criminal charges in three cases, they knew that he had castigated the opposition, the media, the cops and the state prosecutors for purportedly seeking to frame him as part of a political vendetta to oust him. They knew that they had a clear alternative to four more years of a Netanyahu-led Israel, embodied in a party led by three former IDF chiefs of staff. They saw Netanyahu portray that party, Benny Gantz’s Blue and White, as a group of weak leftists.  They watched Netanyahu’s Likud depict Gantz as mentally unstable.” Yet they still chose Netanyahu.

Israelis watched Netanyahu broker a deal that legitimized the Kahanist Otzma Yehudit party as part of a new Union of Right-Wing Parties that would partner Netanyahu in any new Likud-led coalition. They watched. And they made their choice.

In the diaspora, the opposite was the case. The overwhelming vote for Blue and White, with 52 seats, followed by Meretz party with 27 seats, showed the diaspora were looking for leaders who would advance the peace process, open a kotel for all, allow civil marriage and public transport on Shabbat. These were key demands of the top two parties in the diaspora poll, who alone could have formed a coalition of 79 seats.

As David Horovitz noted, Israelis “recognized likely and possible implications of another Netanyahu victory. He’d vowed in the final days of the campaign to extend Israeli sovereignty to all West Bank settlements — a move that, if realized, would have major consequences for what was once called the peace process. It was clear his most reliable coalition partners would be the two ultra-Orthodox parties, Shas and United Torah Judaism — on whose behalf he reluctantly froze the Western Wall compromise deal, and whose key agenda items include making Israel more Shabbat-observant and minimizing the number of young ultra-Orthodox males required to share the rights and responsibilities of military and national service. Self-evidently, enough Israeli voters either share this agenda or are not deterred by it. Enough to hand Netanyahu another term.”

In the United States, the response to the election poll was swift and unanimous amongst progressives. Less than a week after Netanyahu was elected, the ADL, CCAR, NCJW, Rabbinical Assembly, URJ, USCJ and many others wrote an open letter to President Trump expressing their concern about the policy implications of Netanyahu standing by his election promise to annex the West Bank.

The organizations who signed the letter explained that they “recognize that the current environment may not be conducive to direct Israeli-Palestinian negotiations and a permanent resolution.” However, they also believe that “action should not be taken by either side that would make an ultimate two-state solution unviable.” Finally, they respectfully requested that President Trump “affirm long-standing bipartisan consensus that the two-state solution is the essential path to an Israel existing alongside a future state of Palestine in peace and security and that you declare that the United States will not support any Israeli proposals to annex the West Bank, in whole or in part.”

The letter from the diaspora, criticizing a policy that is supported by the majority of the newly elected coalition, would have been unthinkable generations ago. 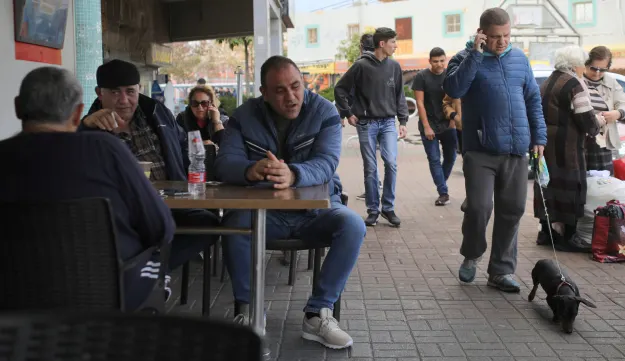 One of the most interesting insights from the Makom poll came from comparing results to an identical question asked in The Times of Israel survey, which was conducted via online panels between February 24 and 27, 2019, among a representative sample of 708 likely voters in the upcoming Knesset elections.

Which of the following five issues do you think is the most important for the government to deal with?

Whilst the Israelis care most about the cost of living, rising rental and house prices, for the rest of the diaspora, it is relations with the Palestinians and forwarding diplomacy that was most important in determining their vote.

These results were similar to the finding of two Pew surveys of Israelis and diaspora Jews in 2017, which found a huge gap in how economic problems are perceived as motivating the political attitudes of Israelis.

Many analysts point out that one of the key reasons the Likud did so well in this election, is the health of Israel’s economy, that has seen record low levels of unemployment and higher incomes in the past three years. Israel’s economic development would be largely unknown to most diaspora Jews, as it is not a topic that is often discussed in Israel programming.

In contrast, Religion and State issues such as marriage, conversion and the human rights of Palestinians come up much more frequently in Jewish education and social discourse of diaspora Zionists today, leading to the diaspora seeing these issues as much more of a priority.

Many diaspora Jews who care deeply about Israel would like to see their visions realized in the halls of the Knesset one day. Yet ultimately, only one of these polls matters in shaping the future of the Zionist project, which has become the most significant undertaking of the Jewish people in the last century.

Today, we live in a time when detachment from the Zionist project is greater than in the past where few took the existence of Israel for granted. The differences in outlook reflected in the two polls can serve as an impetus for improving Israel education and social media debate around issues such as the economy, human rights and religion. Whilst it’s healthy for there to be differences of opinions between Jerusalem and New York, Ontario or Melbourne, for the relationship between the communities to stay strong, a greater understanding of the needs and wants of both is essential.

Unemployment rate in Israel under Netanyahu’s rule from 2009-2019.