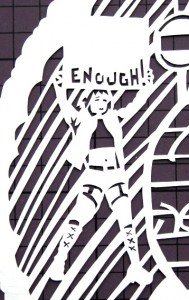 The status of women is a problem not just within Israel, and definitely not just not in the right-wing religious community, although they are particularly vociferous.

I’m interested in knowing how Israeli society, the secular one, portrays women. Here in the UK women’s voices are noticably in the minority in current affairs programmes, what is the gender balance in the Israeli media?

Are women’s abilities acknowledged with a balanced shortlist for literary, sporting cultural awards? Or, like the all male shortlist for this year’s BBC’s Sports’ Personality of the Year, are their achievements overlooked? Are Israeli toy manufacturers and retailers behaving similar to Lego, who have started to market products to girls by emphasising the importance to be pretty and pink?

There are many many ways to erase the female form.   The backlash against feminism in Israel seems particularly crude, and given a religious rhetoric, it is easily labelled. But it demonstrates the same discomfort of women’s presence in the public sphere that can be seen elsewhere in the world.

In 2011 we are right to be shocked that women are being made to sit at the back of the bus. But it is part of a disturbing and insidious trend. Those who advocate that women should segregate, and be absent in public spaces, are perhaps more in touch with the zeitgeist than it is comfortable for us to acknowledge.

Please don’t misunderstand me. I am not excusing religiously scripted misogyny because these attitudes are rife. I hope my artwork clearly demonstrates what I think of attitudes towards women in rabbinic texts. It’s just it is part of a much bigger problem.

As Naomi Alderman writes here, growing up an Orthodox Jew can make one very sensitive to sexist attitudes.