Intersectionality and the Rabbi

Intersectionality and the Rabbi

It was due to be a wonderful event.

A fund-raising concert for the amazing Ezra LeMarpe NGO. Run by Elimelech Firer, this organization helps thousands of people from all walks of life to receive the medical care they need. Its website remarks that it “assists patients with medical services for rehabilitation, cancer patients both adult and children, patients with serious illnesses and disabilities, ambulance services and more. It provides much needed care where the health system falls short.”

All those who have come into contact with Ezra LeMarpe confirm that they succeed in this and more. Set up by one guy who wanted to help people, he became a world expert in all innovations in medicine, able to connect the sick to their best chance of treatment. Jews, non-Jews, women and men, children and old, religious and non-religious – all have been grateful recipients of the help of this NGO – direct translation – “Help towards Healing”. The work of Ezra LeMarpe has been showered with prizes, and the late President Shimon Peres called Elimelech Firer “the eighth wonder of the world”.

It was going to be a great fundraising show – all sorts of Israeli music stars performing their versions of songs by well-loved superstar, Shlomo Artzi. All proceeds to be donated to Ezra LeMarpe.

Only problem was, it turned out that all the performers were male. Every one.

This is because the wonderful man who established and runs Ezra LeMarpe goes by the title Rabbi Firer, coming from an ultra-orthodox background.

Were women to be singing in front of the crowd, he and his family would not be able to attend. From his point of view, it would have been a bit odd organizing a fundraiser that he himself could not attend.

Public opprobrium was not long in coming.

Outrage was rained down on this latest blatant display of had’rat nashim – exclusion of women. Especially as the event was taking place at Tel Aviv’s main cultural auditorium, a space sustained by Tel Aviv municipal funding. It is not known whether the space was donated to the event, but the very idea that Tel Aviv’s cultural center – that Tel Aviv invested millions in its rebuild – should host an event without women on the stage, was unacceptable. Artists began pulling out of the event, and Shlomo Artzi himself announced that he would do his best to persuade Rabbi Firer to introduce some women to the line-up.

It must also be said that this issue of exclusion of women is a constant in Israeli society these days. Only this week we learned of two glaring events.

The official lighting of the Chanukiah at the Kotel this year will exclude women – even though women were allowed to participate only last year, as the image from journalist Tal Schneider shows. 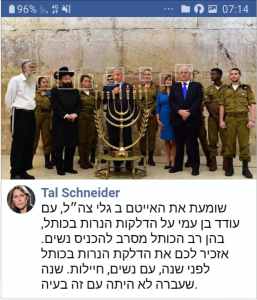 In an even more it’s-so-depressing-it’s-almost-funny example, the Ramla local council has organized an evening for Women’s Empowerment. It’s an event that is being honored by the presence of the Mayor of Ramla, Mr Michael Wiesel. A women’s choir will be singing, but not actually on the stage… the only performers on the stage will be – you guessed it – three blokes. 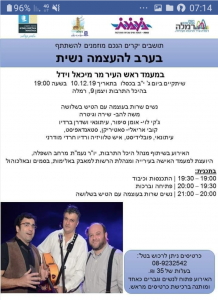 These kinds of events happen all the time. So it’s no great surprise that Rav Firer’s event came in for some heat. But an event that nevertheless was dedicated to an organization that saves lives, was a little different.

Because then came the backlash. In particular, singer-songwriter Alma Zohar – herself a woman not invited to perform – stood up for Rav Firer. She wrote on her facebook page:

“If Rav Firer, who did not exclude my mother 25 years ago when she was diagnosed with ALS and no one even knew what it was and we were alone and desperate, and who did not exclude my sister when she fell sick with cancer at age 32 and had to undergo an urgent operation, wishes to exclude me from singing the songs of Shlomo Artzi – I can live with it.

Not because I don’t oppose the exclusion of women, and not because I don’t know how to open my pie-hole when I have to. But because I will find for myself much better arena in which to have this fight, without shaming a man of grace, to whose level few even reach. Chill out, keyboard heroes, you are shooting at the wrong person.”

Zohar was herself attacked, of course, by the same keyboard heroes she was talking to.

But in the end Rav Firer capitulated.

He did not allow women to perform: He simply cancelled the entire event.

Reactions to the cancelation

The Minister of Education, R. Rafi Peretz, was not slow in reacting:

“The cancelation of Rav Firer’s fundraising concert is the ultimate in self-righteousness. A man who aided and contributed so much to Israel’s sick, suffers a media bulldozer and a campaign against the show in his honor, and all this because of his way of life.”

In the coming days more and more voices were heard as an ongoing clash between different understandings of “doing good in the world” rang out:

What do we mean by “doing the right thing?” – a program

You might choose to work with the following quotations gleaned from Yisrael Hayom newspaper, as discussion triggers, or as the start of a role-play discussion around this crisis of intersectionality in Israel. 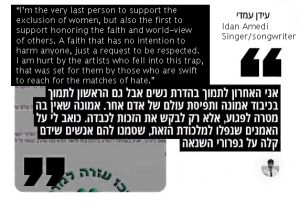 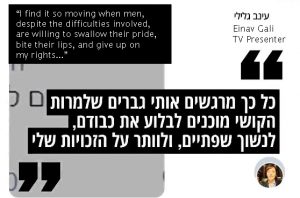 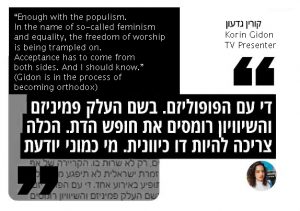 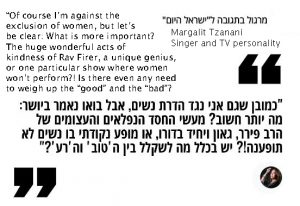