Initial framings and questions about the Trump Plan

Initial framings and questions about the Trump Plan 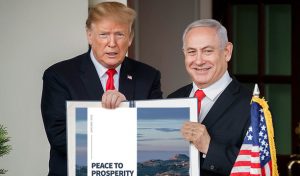 For our purposes, there are two areas to address: What is the plan, and what educational strategies might emerge from its presentation and implementation?

There is a great deal to work through. We’ll be sending out a much fuller guide towards the end of this week, but in the meantime – a few potential thought structures:

What is the plan?

It is all a conversation between the Written Law, and the Oral Law…

The Written Plan, the 181 page document called Peace to Prosperity, presents a detailed structure around which the parties are expected to negotiate. So far so good (depending on your point of view as to what is in the plan).

But then there is the Oral Plan – that which was announced in President Trump’s speech, his aides’ conversations with Israeli leaders, and the way in which the entire plan was presented. This is where the action lies, together with the potential for misunderstanding and confusion.

Without getting into the nitty gritty details, below are some broad questions everyone is left with:

A few essential questions suggest themselves, depending upon how things pan over the next weeks and months:

What essential (ie timeless underlying) questions would you add to this list?