If I Forget Thee Jerusalem, It’s Because of Cyprus – Lauren Cohen Fisher

If I Forget Thee Jerusalem, It’s Because of Cyprus – Lauren Cohen Fisher

In Israel, there’s only one way to get married. Well, kind of.

Israeli law says that issues of marriage and divorce shall be decided by religious institutions. Many look back to the Status Quo agreement of 1947 (an agreement in which the Secularist Ben Gurion promised the Ultra Orthodox faction Agudas Yisrael control over family matters in the future Jewish State in exchange for its support of Zionism) to explain how this began.

But “the many” need to go back a bit further in history to understand how these laws came to be. The tradition actually dates back to Ottoman rule, when marriages were performed according to the Bride and Groom’s (because this is, of course, the hetero-normative 19th century) religious institution. Like many laws from Ottoman and Mandate rule, this tradition was codified into Israeli law (this issue in particular became law in 1953).

For example, interfaith couples, same-sex couples, and couples where one or both of the pair is not considered Jewish by Orthodox standards cannot officially marry in the State of Israel. Even some couples who ‘could’ marry under Israeli law (some Reform or Conservative Jews, say) choose not to because they prefer to be married by a rabbi from their own denomination.

So we are left with the reality that not all Jews can marry in the Jewish state. And even Jews who can marry in the Jewish state, may not be able to have the wedding that speaks to their Judaism. This creates a tension in the “Middle East’s only Democracy” between modern understandings of Freedom (and equality, for that matter) and traditional understandings of Peoplehood.

To try and address this conundrum, Israel has created a few loopholes in the system. The most famous of these began in 2006, when Israel’s supreme court ruled that weddings conducted abroad would be recognized by the State of Israel, as long as the marriage was legal in the country where it was performed. In 2013, roughly 17% of Israeli marriages were performed abroad. That’s a LOT of “destination weddings”.

But the question remains. Is Israel living out its democratic values or subverting them to traditionalist Judaism? When a state sends the message “you can get married, you just can’t get married here,” is it truly ensuring equal rights for its citizens? What about those who don’t want a “destination wedding”? Something feels icky about an Israeli Jew getting cornered into saying “if I forget thee Jerusalem” from the beaches of Cyprus.

On the other hand, a democracy should reflect the will of the many while protecting the rights of the few. Right? Given that the majority of Jews in Israel identify with Orthodoxy over any other denomination, shouldn’t the Rabbinate also reflect Orthodox religious tradition? And given that Israel’s laws ensure that Jews who prefer not to marry within the Rabbinate have at least some way to do so (albeit not without arduous effort), are the rights of the minority still being protected?

Is Israel’s struggle with civil marriage a failure of equality or a successful of example of how a state can navigate traditionalism and modernism without totally compromising either?

Given that in Israel, unlike in America, there is no separation of religion and state, how should the Israeli government best balance the two?

Educators: If you’re interested in engaging your students in this conversation, you may want to open a discussion about how to balance Jewish traditionalism with political pragmatism and pluralistic modernism. You could do this by placing the 1953 marriage laws in conversation with anecdotal stories from Israelis who have had to marry outside the state (“3 Weddings and a Statement”, for example, was an event that garnered particular media attention in Washington, DC). You could then pose some of the above questions to your students, and explore how and when they prioritize the values of traditionalism, modernism, and pluralism. 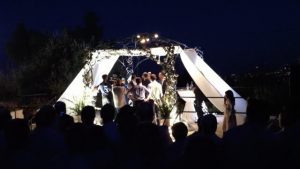