Have a Say in Israeli Elections 2019

Have a Say in Israeli Elections 2019 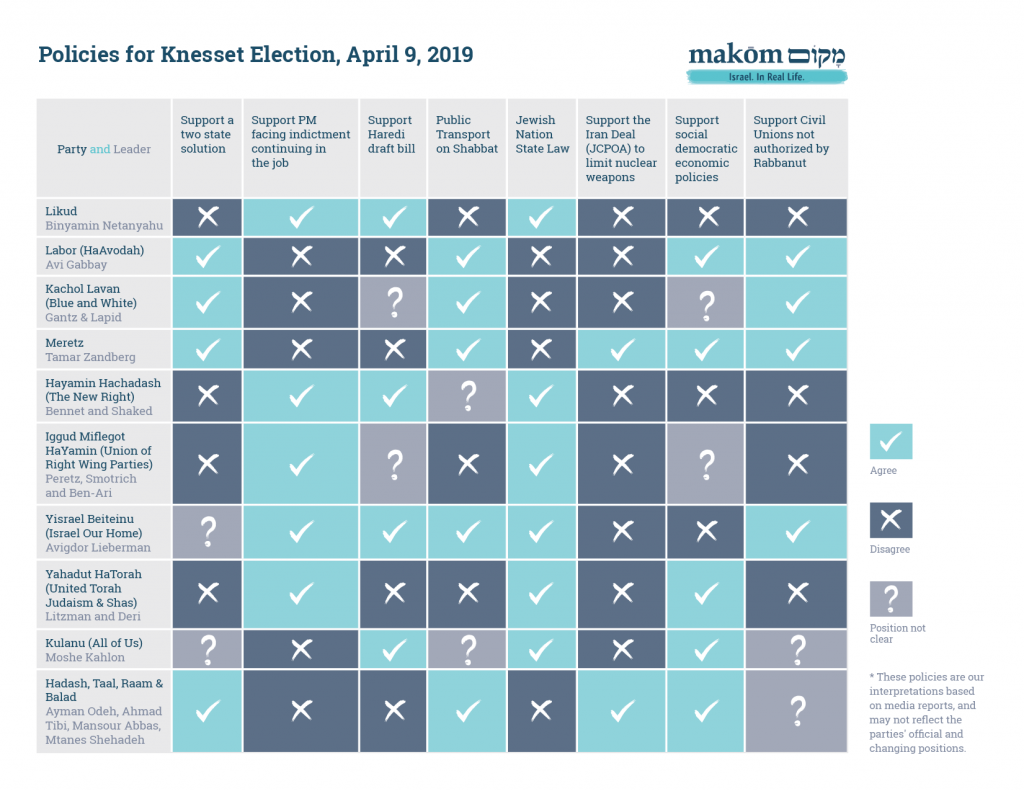 With 47 parties seeking the support of 6.3 million potential Israeli voters on April 9, the race for the next Knesset has never been so fierce. For those connected to the Jewish State who live outside her borders, understanding the complex coalition system can often be quite daunting.

Here at Makom, we see Israel as the greatest Jewish achievement of our generation with democratic elections being the greatest moment of Jewish self-determination, giving citizens the right to choose the future direction of the Zionist project. Unlike Italy which allows members of her diaspora to vote in elections, Israel only allows citizens living in the country on election day to vote (except for diplomats).

However, because the contest of ideas that has always been so much at the heart of the Zionist movement comes to the fore during campaigns, we strongly believe that it’s important for all who have an interest in the future of the world’s only Jewish state to have their say.

Through voting in the Makom Parallel Election, you will be participating in a global poll determining opinion from diverse communities about the direction of the greatest Jewish enterprise of our lifetime. After April 9, we will publish the results of the Makom Parallel Election, side by side with the actual results. This will hopefully create a valuable conversation starter for Israel educators around the world who are looking at what we have in common, and the issues that divide us most.

In putting together this initiative, we felt it important that unlike much of the media hype around this campaign focused on tweets, polls, personalities and hypothetical questions, we would create a policy table outlining where all the parties with realistic chances of being in the Knesset stand on issues that matter.

Putting this table together was very challenging, as many Israeli parties don’t list specific policies on most issues, or change their views once elected due to coalition discipline which often forces them to vote for policies with which they oppose in order to have part of their agenda passed by other parties in the coalition.

By reading this table, and posting any questions you have on the Makom facebook page, we hope to be a valuable resource for you in understanding these elections, and being part of the conversation that sees Israel in Real Life.