“Good for the Jews?” – The Wrong Question

“Good for the Jews?” – The Wrong Question 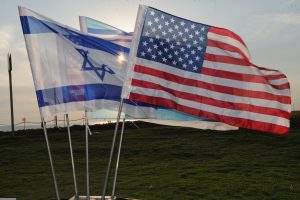 “Is he/she good for Israel/the Jews?” It’s probably the question most frequently asked by my students about any particular politician. I’m not surprised. Having grown up in the American Jewish community, I am very familiar with this pass/fail litmus test. A foreign (or even Israeli?) leader is either good or bad for Israel.

But how can this be a meaningful question? With so many variables to consider, it seems doubtful that this should be a binary, black or white equation. There simply has to be a more sophisticated way to discuss how we think government leaders will affect the fate of the Jewish people. It can’t possibly be reduced to a question of “good guys” and “bad guys”.

Let’s use President Richard Milhouse Nixon as an example. Usually, he is put on the “good for Israel” list. After all, he shipped arms to Israel when it was invaded in the Yom Kippur war of 1973. Those rushed weapons saved the Jewish State. So as Jews, we shouldn’t just use his name to denote creepy political activity. This is the American Jewish “gratitude to Nixon” meme that I grew up with. .

But let’s dive down this particular rabbit hole for a bit. (Really, just a bit. Stay with me) Somehow, that massive weapons shipment, Operation Nickel Grass, has lodged into the collective memory as the passing grade for Nixon. He was a president who was “good for Israel”, and so, we Jews owe him our gratitude. But this ignores the fact that his administration demanded and received assurances from Golda Meir’s government that Israel would not preempt the Egyptian and Syrian strike in the first place!

In 1967, President Johnson had gone short of that. Cold War politics made Israeli preemption difficult for his administration as well. But the way that he communicated this to the Israelis was telling them if “you go alone, then you’ll be alone.” It was their choice. If they preempted, America would offer no help. If they waited to be invaded, America would ship them arms and support their defense. Levi Eshkol felt that the cost in Israeli lives was too high a price to pay to secure American weapons. Israeli defense doctrine demanded the preemptive strike.

The Nixon administration chose a different tactic. Of course, Golda could have defied their demand. Certainly, the Israeli public held her accountable for not doing so. A generation of 18 to 21 year old Israelis was decimated because Israel didn’t preempt. To be clear, both Nixon and Johnson put American national interests ahead of Israel’s concerns. Arguably, any other choice would have presumably been presidential malpractice. Johnson abandoned Israel but left a bit more wiggle room than Nixon did. Should that get him any more or less credit than Nixon on the “good for Israel” meter? Or maybe we should just stop using it.

That massive Nixon administrations weapons shipment in ‘73 followed a smaller surreptitious one. It hadn’t been enough for Israel, but the Americans were trying to keep the Cold War temperature down. Nixon was reluctant to send more. Allegedly, only when the Israelis threatened the use of nukes did Nixon order an open, large scale arms shipment on El Al planes.

Doesn’t the pass/fail test seem silly in retrospect? Forget about Nixon opening relations to China and starting the EPA. Forget about Watergate and treason with the South Vietnamese. Let’s even forget his many, many horrific anti-semitic statements heard on the Oval Office tapes. Let’s stick to the arms shipment. On this one case, the handling of the Yom Kippur war, was Nixon a friend to Israel? Was he, meaning his administration, unambiguously good or bad to Israel at that time? Could that possibly be the right question for an intelligent person to ask?

It’s true, of course, that we get much of our broader perspective with time and declassification. But that really supports my overall point. Rather than the simplistic binary designation of friend or foe of Israel, perhaps we should view foreign politicians from allied countries through a different lense. We should provide our students with a more complex model than “good” or “bad” for the Jews.

A friend is someone who will work in your interest out of love and loyalty. They will do so even if it isn’t in their interests, and perhaps even if it goes against their own interests. An ally, on the other hand, is someone who shares your goals, and so you can work on them together. Governments can be allies. They cannot, and arguably should not, be friends.

No government should act against the interests of its citizens for the sake of another country. A government’s job is to take care of the people of its own nation. To further the interests of their own state, they will work with other states as well. When two nations have an overwhelming confluence of interests, they have a special relationship. For the last few decades, the U.S. and Israel have had such a relationship. As long as those interests coincide, we will remain allies. Allies need and use each other. Its symbiotic, not altruistic.

The reductive pass/fail approach is not only problematic because it fails to pass intellectual muster. I fear that the friend/enemy duality is an exilic Jewish vestige. Zionism is the movement that demands the Jewish nation to stand on its own. We should appreciate when an ally helps us, but remember that they are helping themselves. Presidents aren’t our saviors or destroyers. We must be open to allies, but ultimately self-reliant.

Of course, the binary system of evaluating politicians is problematic  at best, and dangerous at worst, on just about any topic. As Israel educators, our studies focus on a particular aspect. But it’s certainly worth helping our students become more sophisticated, critical thinkers in general.

What are the difference between appreciating, thanking, and depending on foreign politicians and countries? If Zionism means that we take care of our own, how do we think about and discuss those foreign leaders? The answers to those questions aren’t  binary.