In honor of International Women’s Day, and the 20th anniversary of the death of Ofra Haza

Literally it’s Arabic for happiness, with a sound-reference to a spring chicken. But in common Israeli slang, Frecha would probably be translated as a combination between a slut and a dumb broad. It’s not a nice word in the way it’s used. Further than that, there is ethnic shade to it all. A Frecha has mainly been used to denigrate young women of Mizrachi origin. So combine dumb slut with a nice smidgen of racism, and you probably have it.

At the same time, the word Frecha is at the heart of a beloved song that was first performed by one of Israel’s most beloved Mizrachi women: Ofra Haza. 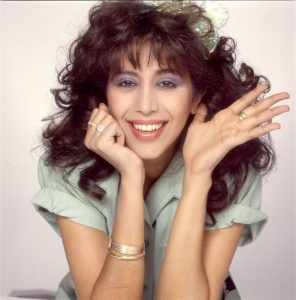 Haza was a woman of Yemenite roots, born in Israel in 1957, with the looks and voice of an angel. She was a movie star as well as a pop star, coming to Israeli fame in the film Shlager, in which she sang the hit Song of the Frecha, written by two Ashkenazi kings of the cultural establishment – Tzvika Pick and Asi Dayan.

In 1983 she reached the pinnacle of Israeli mainstream, representing Israel at the Eurovision Song Contest in Munich, singing Ehud Manor’s lyrics: Chai. This was one of those amazing moments in Israeli cultural history: A Yemenite Jewish Israeli singing that the Jewish People Lives – on a Munich stage less than 40 years since the Holocaust and only 11 years since the Munich massacre.

Interestingly enough, Ofra Haza’s international career really took off when she addressed her roots. Taking a commercial risk, she created dance versions of classic Yemenite tunes. Israelis went crazy for her album, and one day she was lucky enough to get sampled by a UK DJ. Dancers went in search of the source, and suddenly one of Israel’s first fusion sounds went global.

Not only was her album a huge hit, but she was later recruited to sing the voice of Moses’ mother in the successful animation of the Exodus story: Prince of Egypt. 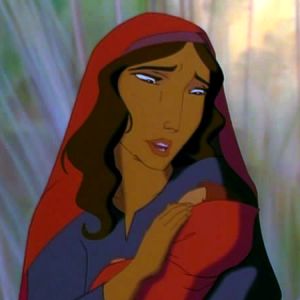 Word has it, the animators of Dreamworks even decided to model their drawing of Yocheved on Ofra Haza herself.

Haza died in 2000 of AIDS-related pneumonia. Though most people argued at the time that she died of shame. It was the early days of AIDS – ignorance and prejudice ruled in Israel. It seems she could neither accept her infection, nor bear the thought that others would know she had it. After a serious health breakdown she was admitted to hospital, but apparently refused to allow anyone know what she was sick with. It seems that even nurses who tended her did not know what her illness was. Having spent so long with AIDS and no appropriate treatment, Haza died in hospital.

The Mizrachi woman and the Frecha

Much has been written and talked about Haza’s life and death. On the one hand she was a soaring example of a Mizrachi woman who transcended gender and ethnic stereotypes to become a global star. She grew up in the slums of the Hatikvah neighborhood in South Tel Aviv, and ended up collaborating with Sisters of Mercy, Sinead O’Connor, and Thomas Dolby to name but a few. On the other hand many say Haza was defined by and eventually killed by her traditional assumptions about gender norms, and a Mizrachi woman’s place in the world.

No greater example of how Haza both broke away from, and reinforced ethnic and sexist notions, is the song that made her an Israeli star: Song of the Frecha.

The song was written for a movie in which she was starring: Shlager. Haza plays Dina, a local girl who is frustrated by the attentions of a boring intellectual. In a “cultured” restaurant, he warns her to keep her voice down and not behave like a Frecha. Dina responds that if to hate a boring art movie is to be a Frecha, then so she is. And off she goes to sing her song of rejection and self-reclamation:

I wanna dance, and I wanna do crazy stuff

I wanna laugh and I don’t want you

I want it in the day and in the night

I wanna shout: I’m a Frecha!

On the face of it, this song can be seen not just to reflect societal stereotypes, but to reinforce them. The lyrics have her announcing that a Frecha is “not one for long words”, and is focused on the latest fashion and empty-headed parties.  “Wherever the lights take me there I am/ With nail polish, lipstick and the rest of the pose…” More than this, at its poignant close, the song itself condemns the Frecha to an ignominious end, living in the impoverished projects with a husband and a smoke-filled home.

Because at the end of each Frecha

Lies waiting a small neighborhood in the projects

An exemplary husband and a thousand directions for the smoke.

Fly, happy little chick, the lyricist seems to say – you have a few years of superficial fun before you end up back where you came from, back in the limitations of the ethnic working class.

The Contradictions at the heart of The Song of the Frecha

Yet despite its stereotyping, the song resonated with Israeli society, and even became something of an anthem for young Mizrachi women.  Somehow it expressed much of the tensions in their lives. On the one hand they felt themselves instinctively rejecting the patronizing condescension of the Ashkenazi hegemony, and on the other hand were frustrated by their traditional fathers’ expectations they behave modestly and help their mothers in the kitchen. Small wonder they resonated with the basic cry – “I wanna dance!”

There is no doubt something strange about a song written by a sexist Ashkenazi guy (son of the sabra hero, Moshe Dayan no less!) giving voice to the ethnic and gender-based frustrations of Mizrachi girls, but perhaps this underlying message came from Ofra Haza herself. Haza was by far from the first choice of actress for the role, but her performance embodies the contradictions of the song. While she sparkles with youthful frustration, she plays against the humiliating lyrics themselves. Her Frecha is no air-head: the Haza Frecha is a gentle rebel.

After her success, Haza always seemed to be uncomfortable with the song. In every youtube version I’ve seen of her performing the song there is a form of apology at the start, and such a gentle innocent delivery of the song’s bawdy words that one might mistake it for a prayer. In this version (with subtitles), she even calls out for a reclamation of the word itself.

The Festigal and The Song of the —–

Jump forward 41 years. It’s time for the annual Festigal. Festigal is a monstrous cultural creation of children’s TV and unscrupulous cultural producers. (Tell them what you really think, Robbie!) Shamelessly aimed at little kids who nag their parents to buy them overpriced tickets, the Festigal is a garish musical show full of merchandise and crappy pop songs. (No really, what do you think, Robbie?) Each year has a new annoying theme, each year it sells out shows throughout Chanuka. (My greatest parenting achievement? Never taking Hila to a Festigal!)

This year they decided that one of the songs that would be sung by the latest young internet star would be a “modern” version of Haza’s classic: Song of the Frecha.

It’s not clear which came first – the realization that they couldn’t use such a now- offensive word, or that they chose the song specially for its controversial click-worthy reference. Either way, Festigal made it to the headlines and to social media virality with their solution to the song: They would present their version of Ani Frecha without ever using the word…

This decision of course drew all sorts of derision, parody, and – happy marketers – lots and lots of publicity. Some of course were outraged (outraged, I say!) by the savaging of a beloved song by the tyrants of the politically correct. Others were shocked that anyone would choose to resurrect such a horror of a sexist-racist song in the first place. The main thing is that it did great on social media, and although the word “Frecha” was deleted, a different word  was repeated many times to the delight of its marketers – “Festigal”…

Some months later came a fuller response. A group of women refused to leave “Frecha” in the gutter, and did a full-on reclaiming…

I have a Masters in Gender studies

And I’ve been hairdressing for years

I’m a cashier and I’m an engineer

And I’m on my way to the Knesset

The sunshine of Jaffa splits the sea

And I sail into my high-heels

When the mood takes me I throw them off too

And that they sort out my pension

I wanna be indispensable

And records of David Bowie

Come on baby let’s wake up for Slichot at synagogue

And afterwards to the Conference for Successful Women

And I don’t want you

I want the Krayot (North of Haifa)

Don’t visit me in a dream

I moved I gendered up

And reached up to right now

And all the signs

How you love to tell me

Yalla, give it up and order yourself a cab

I listen with SurroundSound

Once when Simcha came to the factory

It was before the Festigal

She whispered to me her name

And told me shyly

Just so you know, Kappara,

And that they sort out my pension

I wanna be indispensable

I think it’s rather wonderful.