Framing Zionism and the Elections according to 4HQ

Framing Zionism and the Elections according to 4HQ

Our take is that Zionism is the Jewish People’s answer to the universal aspiration expressed in the Hatikvah National Anthem, The Hope: To Be a People, Free In Our Land.

When teaching about the elections, we suggest that when Israelis place their vote in the ballot box, they are voting for the party they believe has the best answers to the four questions that emerge from this Hope:

To Be?
They vote for a party that they believe will look after their security – however they define security.

People of Israel?
They vote for a party that they believe will embody their Jewish values, their feeling of solidarity with Jews around the world, and their connection to the Jewish faith.

Free?
They vote for a party that cares about freedom, democracy, and human rights as much as they do.

In Our Land?
They vote for a party that reflects their views on the borders of Israel, and its sacred places.

Zionism, we would say, it to find the correct balance between these four questions. We decided that we would take a regular glance at the election campaign narrative through this filter of four questions, and try to gauge where the Zionism of the 2015 electorate was leaning. 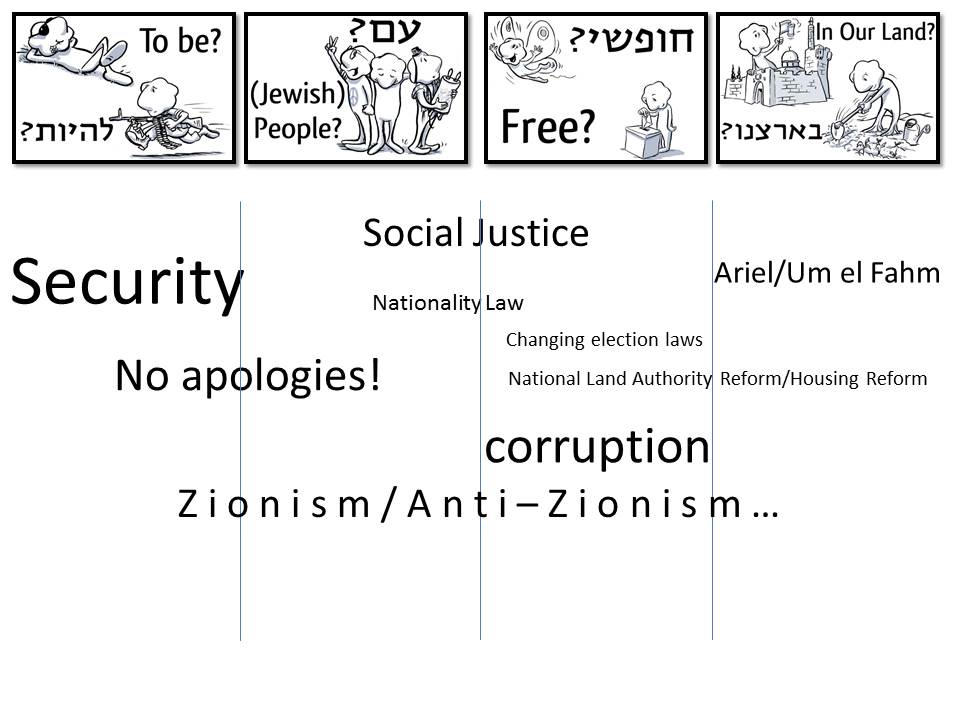 The chart above is an example of what we’re talking about. Right now, how things are being talked about, with what impact, and in what context.

This is an ongoing experiment that we would love to share with you. Our analyses are not intended to have political merit or bias. We are simply keen to see how this filter of 4HQ, the Four Hatikvah Questions, can enable us to detect deeper trends in the Zionist discourse as played out in the campaigning for the 2015 Elections.

You are invited to offer your own 4HQ interpretations of the election campaign – email us or add your comments below. Warning: We are aiming for this to be a cynicism-free zone – there may be other less ethical motivations playing throughout the campaign, but there are more than enough other outlets exploring them…