In chapter six, Shavit chronicles a time when the population more than doubled as hundreds of thousands of immigrants poured into the young country. The majority of immigrants came from great trauma, whether the trauma of the Shoah or the trauma of radical and sudden dislocation from Arab lands. Through four personal stories, three from central and eastern Europe and one from Iraq, Shavit leads us into the lives of some of the traumatised Jews who arrived in the country in these years.

Two of the young men Ze’ev Sternhall and Aharon Barak (their new names), were delighted to arrive, feeling tremendous anticipation about the chance to build a new future in a safe haven of which they already felt deeply proud. They rapidly turn themselves into success stories of transformation and progress. The third figure, the writer Aharon Appelfeld, finds adjustment to the new society much more difficult, searching for the old European Jewish society that he had known and loved. He became a chronicler of alienation and most of his writing focusses (not uncritically) on the European world left behind. For Louise Aynachi from Iraq, her day of Aliyah is a day of mourning for the life left behind.

Through these four principal figures (with others in the background) Shavit draws a picture of a traumatized society which refuses to a large extent to recognize or even to legitimize the trauma of the different individuals, so busily is it engaged in the building of state-building in the 1950’s.

I had been in the country only a week. I didn’t speak the language, I didn’t know the land. But when I took off my old clothes I shed the past, the Diaspora, the ghetto. And when I stood in the Atta store in a khaki shirt, khaki trousers, and sandals, I was a new person. An Israeli.

In all of these schools Ervin [Aharon Appelfeld] felt totally alone, without family or community. He found no common ground with the arrogant Sabras, the Oriental newcomers, or the ill-mannered Israeli girls… On Saturday nights he… would sit at a seaside cafe watching the people pass by. Some were Holocaust survivors, others were Arab-world survivors, but what Appelfeld saw were human wrecks. He saw the uprooted Jews of the twentieth century, whose lives had been shattered by disaster.

One blow followed another… On top of that was the DDT, the humiliation of life in a tent, the condescending attitude of veteran Israelis, the scornful attitude of the Ashkenazi immigrants. And the fact that in Israel, Jewish Baghdad was not perceived as the cradle of a great civilization but as the unknown territory of barbarians. Within one week they experienced a sudden fall from paradise to humiliation and deprivation.

These three stories of immigration ask searching questions about identity.

Although development was rampant, social gaps were narrow. The government was committed to full employment. There was a genuine effort to provide every person with housing, work, education, and health care. The newborn state was one of the most egalitarian democracies in the world. The Israel of the 1950s was a just social democracy.

For its outstanding economic, social, and engineering achievements, the new Israel paid a dear moral price. There was no notion of human rights, civil rights, due process, or laissez-faire. There was no equality for the Palestinian minority and no compassion for the Palestinian refugees. There was little respect for the Jewish Diaspora and little empathy for the survivors of the Holocaust. Ben Gurion’s statism and monolithic rule compelled the nation forward.

But the miracle is based on denial. The nation I am born into has erased Palestine from the face of the earth. Bulldozers razed Palestinian villages, warrants confiscated Palestinian land, laws revoked Palestinians’ citizenship and annulled their homeland. By the socialist kibbutz Ein Harod lie the ruins of Qumya. By the orange groves of Rehovot lie the remains of Zarnuga and Qubeibeh. In the middle of Israeli Lydda, the debris of Palestinian Lydda is all too apparent. And yet there seems to be no connection in people’s minds between these sites and the people who occupied them only a decade earlier. Ten-year-old Israel has expunged Palestine from its memory and soul. When I am born, my grandparents, my parents, and their friends go about their lives as if the other people have never existed, as if they were never driven out. As if the other people aren’t languishing now in the refugee camps of Jericho, Balata, Deheisha, and Jabalia.

The Israeli continuum rejects trauma and defeat and pain and harrowing memories. Furthermore, the Israeli continuum does not have room for the individual. That’s also why the Holocaust remains abstract and separate. It’s not really about the people living among us. The message is clear: Quiet now, we are building a nation. Don’t ask unnecessary questions. Don’t indulge in self-pity. Don’t doubt, don’t lament, don’t be soft or sentimental, don’t dredge up dangerous ghosts. It’s not a time to remember, it is a time to forget. We must gather all our strength now and concentrate on the future.

The first comes from Ze’ev Hafetz, (born 1947), writer and journalist, born in America, who came on Aliyah just after the Six Day War. Years later, wrote about his experiences. In this piece he describes his dawning understanding that underneath the celebratory surface of the society, there was a deeper sadness. 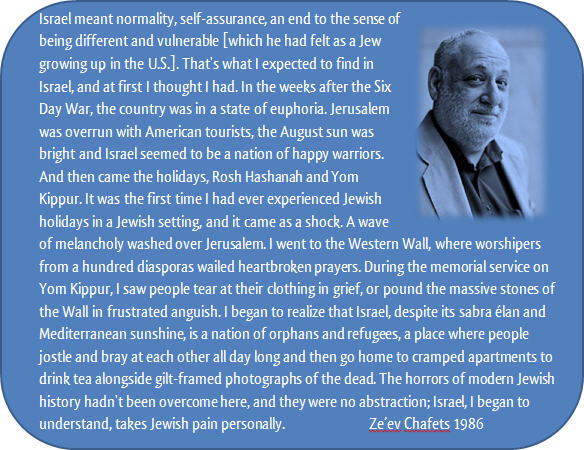 The second piece is taken from a speech by Ben Gurion (1886-1973) in the very early period of the state, in which he describes his understanding of anti-Semitism. He asserts that the problem that led to the Holocaust was the presence of the Jews in other countries, not the natural response of nations to that presence. 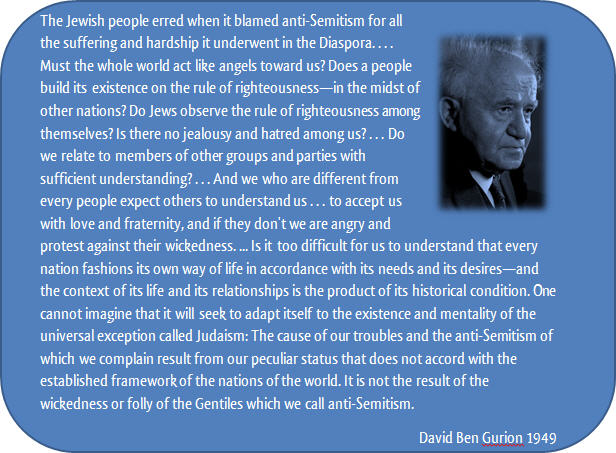 The third piece is taken from a T.V. interview with Israeli writer Yehudit Hendel, (born 1926), on growing up in Israel in the early state years. It is a revealing piece which needs to be added to Ben Gurion’s piece to add an extra dimension to the phenomena that Shavit is describing in the chapter.