For American and Israeli Jews, ‘wrestling and hugging’ must go both ways

For American and Israeli Jews, ‘wrestling and hugging’ must go both ways

Today, a change is needed. We can no longer expect that Israelis will unconditionally embrace every American Jew who comes to Israel. 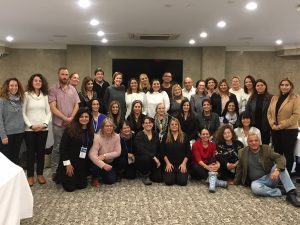 The growing gap between many American and Israeli Jews is almost daily news in the Jewish world. People on the Left tend to attribute this rift to Israel’s treatment of Palestinians, while those on the Right point to their belief that many liberal Jewish Americans are not sympathetic enough to Israel’s security needs.

It seems that Israelis can be roughly (and anecdotally) split into two groups when it comes to their views on American Jewish life:

1) American Jewish life is superior. American Jews are so lucky. They are mostly free from the day-to-day security woes we have (despite the increase in antisemitism). Cost of living is cheaper, and life is generally easier, in the US.

2) American Jewish life is inferior. American Jews are quickly assimilating. They don’t understand what “real” Judaism is, and they can’t possibly live a life of Jewish meaning outside of the Promised Land.

Of course, those are the extreme versions of these two perspectives. But their combined force is felt very clearly in Israeli society. And interestingly, it seems that American Jews are not yet ready for Israelis to be talking about them. They are used to not only talking about Israel, but “wrestling and hugging” with Israel – a phrase coined by Makom: The Israel Education Lab of The Jewish Agency for Israel. To wrestle means to relate to Israel as a real place; a place of beauty and inspiration, but also a place with serious flaws. It means naming the “elephants in the room,” rather than glossing over them. In turn, American Jews expect that Israelis will thank them for their philanthropic and moral support.

Today, a change is needed. We can no longer expect that Israelis will unconditionally embrace every American Jew who comes to Israel. That’s why American Jews need to ask their Israeli counterparts to reciprocate the wrestling and hugging. Israelis need to be given permission to do some of their own struggling. They need to be given information and experiences – much like the information and experiences devoted to American Jews to help them make sense of their relatives across the ocean.

How do we teach a different approach? The Jewish Agency’s Makom, funded by UJA-Federation of New York, is working to bridge this gap by calling for hugging and wrestling that goes in two directions. We’re developing pedagogic models that not only help Americans to understand Israel, but Israelis to understand Jewish Americans. We’re working with educational leadership in Israeli society – with the Israeli Education Ministry, the umbrella organizations for the large and smaller youth movements, and pre-army academies – to support and encourage this hugging and wrestling, which we believe will create a closer-knit Jewish people.

This sentiment was strongly reinforced on my recent trip to New York City with about 30 principals of Israeli secular schools. The principals are from a variety of Jewish backgrounds and from all parts of the country. They came ready to learn about American Jewish life. Many of them came with preconceived notions about “American assimilation” and with a sense that Israeli Jews – even completely secular ones like many in this group – have the upper hand when it comes to Judaism.

But what they found was an American society that is not only accepting and tolerant of difference but is deeply committed to Jewish education and strengthening Jewish identity.

Many in this group of principals completed a week in New York feeling that they had discovered a newfound interest in their own Jewish lives, beyond being Israeli. What surprised me most wasn’t the group’s critique of American Jewish life, but the participants’ openness to personalize much of what they were seeing.

In other words, this group of principals was wrestling in the truest sense of the word. They were wrestling to understand how American Jewish society looks weak Jewishly – witnessed by Israelis in areas such as intermarriage and shrinking membership in many established organizations – and simultaneously incredibly strong and inspirational given American Jewry’s educational innovation, philanthropy and joy in almost all parts of Jewish life. As such, this group of Israeli Jewish leaders left the US beginning to take part in some of the same struggles that American Jewish leaders face every day, trying to understand how to create the perfect chemistry between continuity and change.

The Israeli principals were also inspired by the values-based education they witnessed in the US, equipping them with a new understanding that even in secular settings, it’s possible to teach universal values that have particular expressions in Jewish texts and traditions. Accordingly, the Israeli principals have started discussing how they can include more Jewish texts and traditions within the general values education imparted in their own secular schools, among other new practices they wish to implement back home.

Ultimately, bringing Americans and Israelis into at least some of the same struggles will help create a more joyful and thriving future for the Jewish people at-large.

The writer is director of Makom: The Israel Education Lab of The Jewish Agency for Israel.