Shavit opens his chapter on settlement by exploring the effects of the 1967 and the 1973 wars. The Six Day war of 1967 brought Israeli control of the territories and liberated a potential messianic force within the ranks of religious Zionism. The 1973 war was a war of deep trauma for Israel and the eventual victory could not change the deep discontent regarding the war, the government and indeed, the entire leadership.  A malaise was revealed and the country went into a kind of spiritual tailspin.  Many sought new directions and new certainties.  It is in the contrasting but cumulative effects of these two wars that Shavit locates the roots of the whole settlement enterprise.

The majority of the chapter consists of conversations with four figures who represent the leadership of the settlement enterprise. The two central conversations, with Pinchas Wallerstein and Yehuda Etzion, are the real meat of the chapter.

Seeing themselves as the continuation of the old Zionist fervor associated with the early Kibbutzim such as Ein Harod, they shared the new “settler outlook”. They believed in the importance of settlement in the Biblical heartland both in order to do God’s will (as they see it) and to revitalize the Zionist enterprise by adding a spiritual dimension. 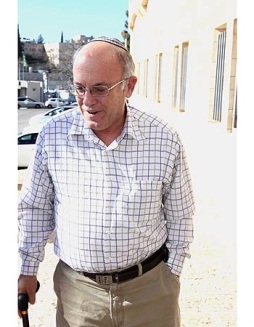 Wallerstein is the practical do-er.  It is he, more than anyone else, who has been responsible for the rapid accumulation of settlements and the necessary accompanying infrastructure of roads, industry and agriculture throughout the whole of the West Bank.  Playing the system with great acumen and smartly exploiting government weakness and the cracks between different government agencies, he has created the basis for the hundreds of thousands of settlers who now inhabit the West Bank.

Etzion formulated a revolutionary plan to supplement the gradualism of his friend’s approach with a visionary ideology which would involve terror activities, primarily the blowing up of the mosques on the Temple Mount. His underground terrorist organization was caught by the security services in 1984 and he was sentenced to a long jail sentence.

Shavit explores the similarities and differences between the two activists in order to try and understand the ideology that underlies their various actions.

Shavit himself views the whole settlement project with deep antipathy, while finding himself disturbingly connected to it. He suggests that this great conflict between the “Zionism of the plains” and the “Zionism of the mountains”, could threaten the entire Zionist project.

This is the first time in the book we hear Israeli voices calling for a religious, spiritual interpretation of Zionism.

In the simple living room of his modest Ofra home, his [Etzion’s] words touch me. Although I reject his worldview and despise his actions, I am not indifferent to what he says. Surprisingly, I recognize the great forces that pulled him to Ofra. I can understand what he says about the plains and the mountains and the history of Zionism. With horror I realize that the DNA of his Zionism and the DNA of my Zionism share a few genes.

When arguing for a pluralistic understanding of Zionism, Amos Oz once said that Zionism should be understood as is a surname, a family name. Within families there can be arguments.

When I listen to Wallerstein and Etzion, I realize that they did not have a well-defined doctrine regarding the Arabs. When they came to settle in Samaria, they were more ignorant than evil. They saw Israel’s 1970s weakness and realized that the Israeli crisis was not only political but spiritual. They felt obliged to deal with the crisis, but the solution they came up with was absurd and completely ignored the demographic reality on the ground. Wallerstein and Etzion did not realize this because they did not think through the consequences of their actions. They were young and rebellious and they were part of a juvenile movement that enjoyed breaking a taboo, crossing a line, and challenging the establishment. But they never knew where they were really headed. They never realized what sort of mess they were about to create. They established Ofra without comprehending its repercussions.

Shavit seems to argue here that there is a crucial moral difference between intentions, and actions: “They were more ignorant than evil.”

“There was no real leadership to speak of, and no real state to speak of…”

The first is taken from the poem “A Day in the Life of Nablus” by the Palestinian poet, Sharif Elmusa. Elmusa (born 1947) is from a family that became refugees in 1948 and moved to a refugee camp in Jericho.  He is currently a professor of Political Science at the American University in Cairo. 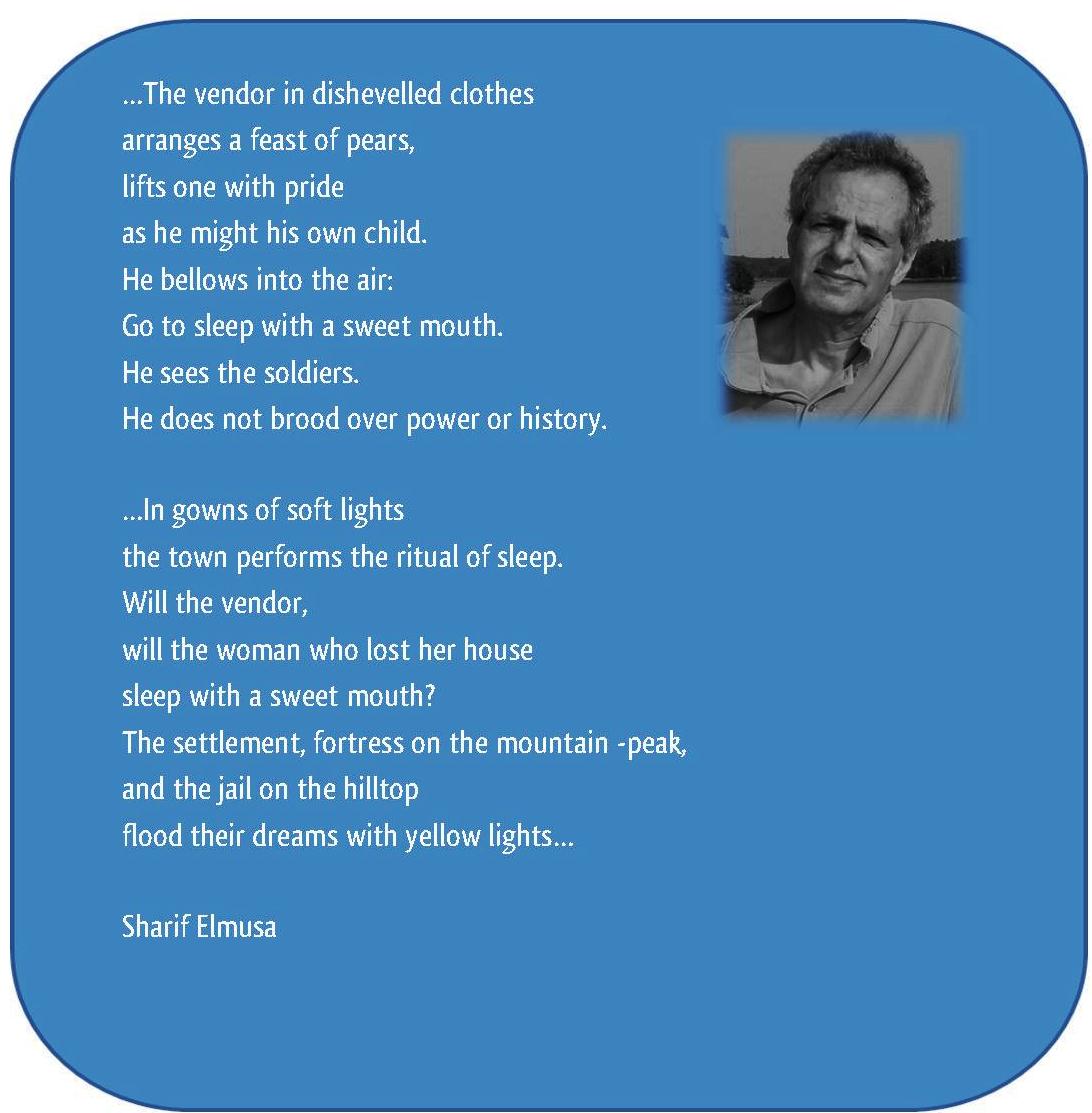 The second piece is taken from Emuna Elon (born 1955), columnist and author, a religious woman who is also known as a campaigner for women’s rights. For many years she lived in Beit El, north of Ramallah. This is from her story “The Maidservant’s Son”, which tells the story of a complex relationship between Ronit, a woman who lives on a settlement in the West Bank, and Ibtisam the Palestinian woman who cleans house for her 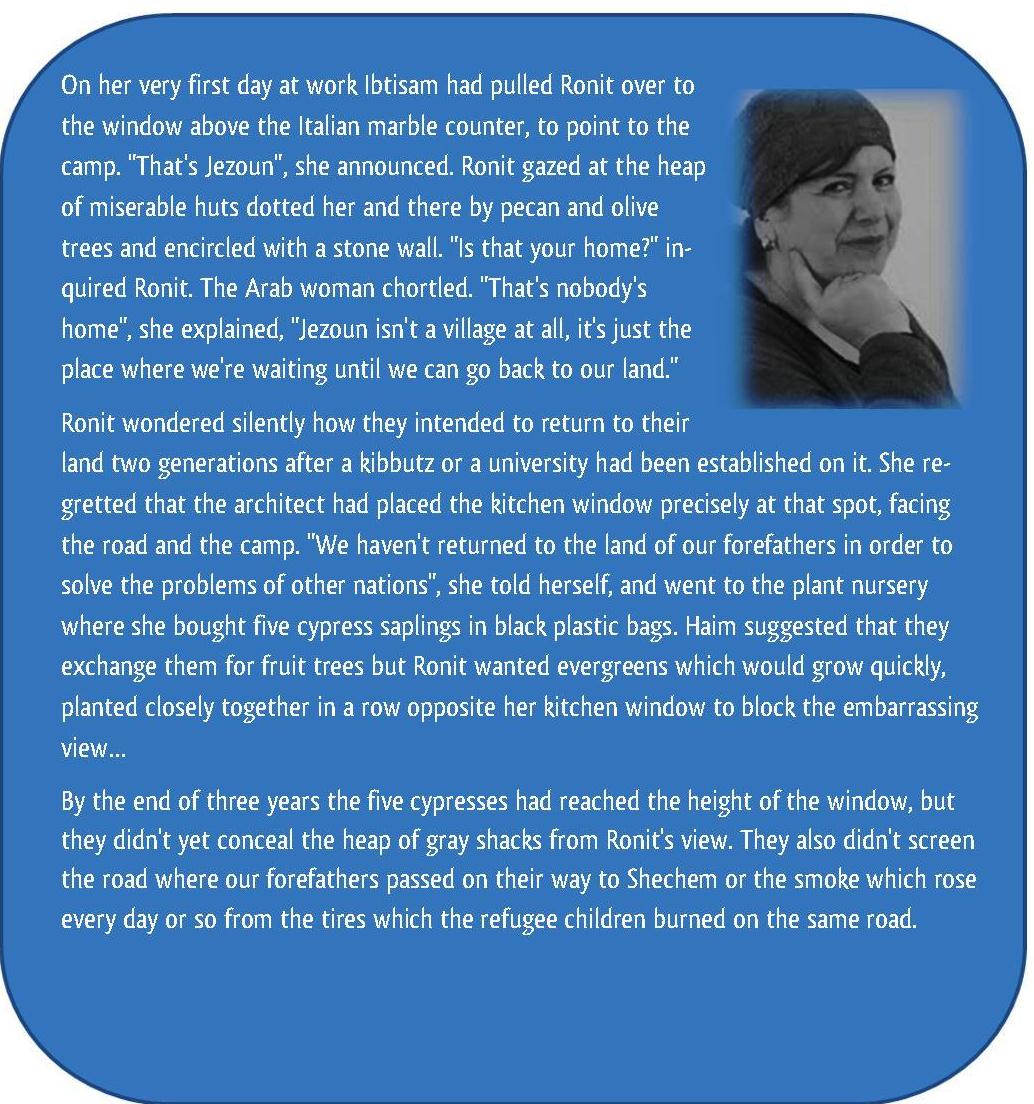 The third piece is from much loved song based on the poem “Hoy Artzi Moladeti” (“Oh my Land, my Homeland”) written in 1933 by Shaul Tchernichovsky (1875-1943). It presents an empty land, waiting to be filled and revived by the early Zionist settlers. It can be likened to the Biblical landscape encountered subjectively by the settlers of the mid 1970’s in the areas of Judea and Samaria 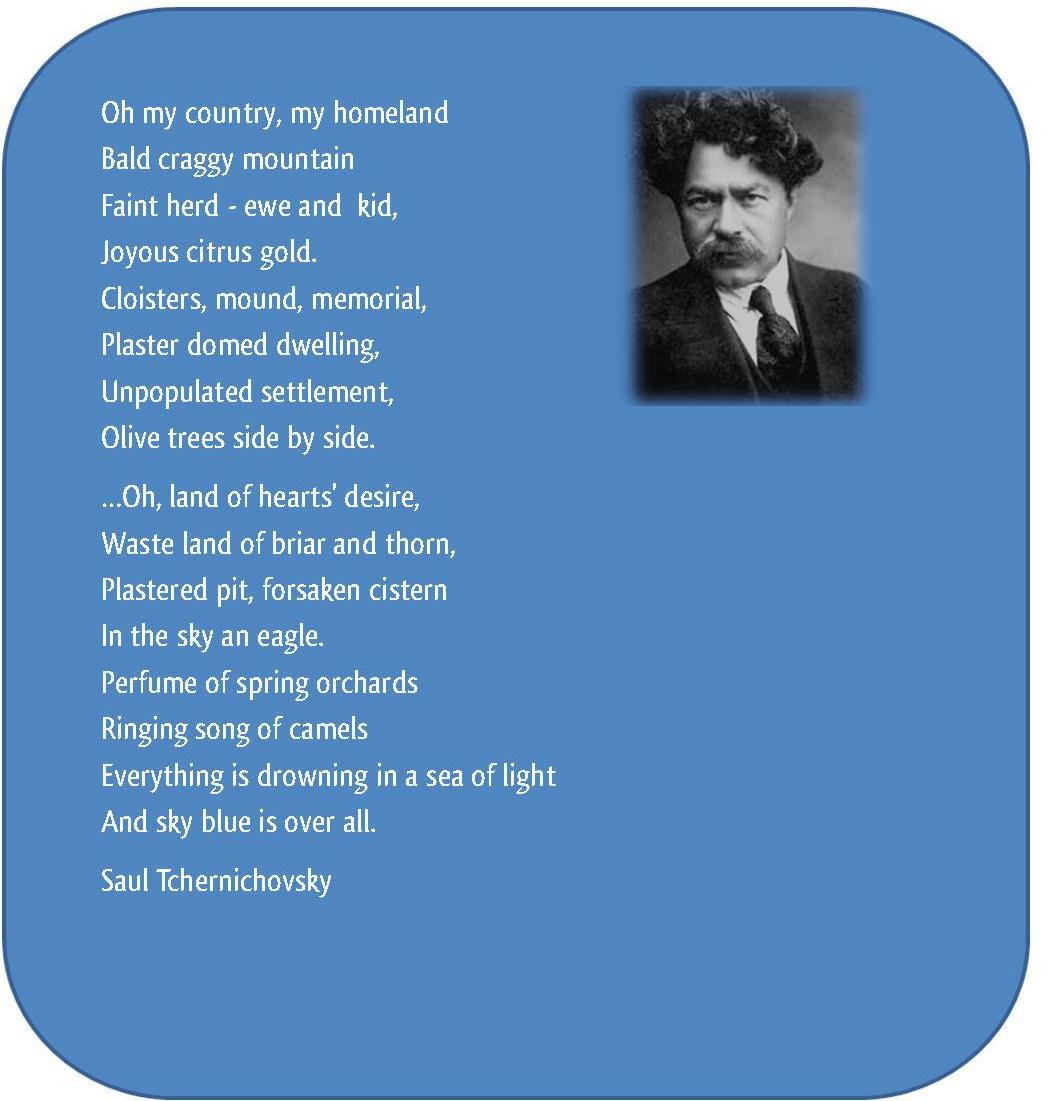 Go to the next conversation: Sixth Conversation Chapter Ten: Peace 1993