Educators’ Guide: Lessons We Can Learn from the Rabin Assassination

Educators’ Guide: Lessons We Can Learn from the Rabin Assassination

On the 4th of November 1995, Yitzhak Rabin was assassinated at a Peace Rally by a fellow Israeli named Yigal Amir. The Bar Ilan University law student felt motivated to act against the democratically elected Prime Minister in order to stop the Oslo Peace process with the Palestinians, which he and many others viewed as a disaster for the people of Israel.

At the trial of Yigal Amir, Justice Edmund Levy said the following before announcing his verdict of life imprisonment: 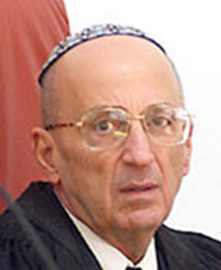 “The fact that such a wild growth could sprout from within our midst, requires us to examine which parts of Israel’s educational system failed in not successfully imparting and establishing the foundations of democracy into elements of the younger generation. The accused’s actions are not only a personal failing, and it is not with him alone that we are coming to terms today. It is with everyone who, directly or indirectly, specifically or in general, gave him to understand that it was permissible to cut down a person’s life on the basis of any ideology whatsoever.

Another item that we feel must be emphasized is Israel’s multi-faceted society, which time and time again has sinned by baseless hatred, and shown very little brotherly love.

In a democratic country, it is permitted — and, at times, even required — to disagree with the government’s outlook and its political line. But we must all repeat — day and night — that those who treasure life do not change their leadership by an assassin’s bullets, and that the only way to do so is via free, democratic elections, or no-confidence motions in the Knesset.

Our discussions must be conducted firmly, yet with mutual respect and tolerance, with the latter being of particular importance especially when unpopular opinions are voiced by a minority. Furthermore, the split in the nation will neither disappear nor heal by words alone, but rather by deeds, first and foremost, the deeds of the public’s leaders — from the entire political spectrum — who are commanded to teach themselves — day and night– “Wise men, be careful of your words.” 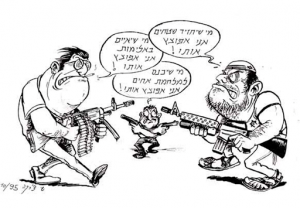 Religious Zionist: “I’ll mess up anyone who wants to return territories.”

Secular Zionist: “I’ll mess up anyone who threatens with violence.”

Small man in the middle: “I’ll mess up anyone who starts a civil war.” 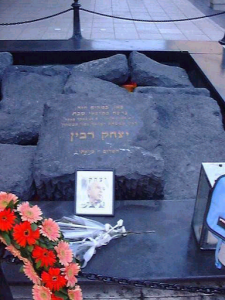 On the Tel Aviv site where Rabin was assassinated in Kikar Malchei Yisrael (now named Kikar Rabin), the stones have been raised from the earth. Etched in gold, passersby who come to pay their respects read the words:

“Here, in this place, motzei Shabbat [Saturday evening], on November 4, 1995/12 Heshvan 5757, the Prime Minister of Israel and Minister of Defense, Yitzhak Rabin, was murdered. The peace is his legacy.”