The seasons had finally changed! The long Israeli summer – and the second lockdown that followed it – were finally over. Having completed only one section of the trail in the last four months, I was ready to start knocking off a few more sections. In fact, for the first time, it was the rain that ended up delaying my setting out once again by an additional week or so.

But I was anxious to find a window of time as soon as possible. I knew that it was an easy section coming up – both in terms of distance and terrain.

After the rigour (and also stress in some ways) of the previous two sections (one I had started at 230am, and one had necessitated an overnight stay), I was ready for a relaxing short day out and to progress a few more kilometres. Eilat still seemed a long way away…

So, wearing long trousers and long sleeves for the first time, I picked up the trail from its very accessible starting point at the entrance to Upper Tiberias.

The first few kilometres were actually the first time that the trail had involved ‘urban’ walking. It was a nice change, though I felt a little self-conscious as people passed on their way to work or school, as I was hiking past their homes on the edge of Tiberias. But they were very nice homes, at least in this part of Tiberias.

I wonder if the view of the Kinneret that was going to be with me every moment of this section ever got tiring for them. I kept going until the trail took me past the town and to the entrance of the forest at the edge of the town. Now I felt a little bit less self-conscious as I sat on a bench for my morning tea and snack that had now become both a habit and a tradition at the beginning of each hike. 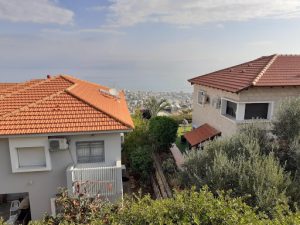 With the comfortable weather, easy hiking trails, and desire to get back to Jerusalem at a good hour, I hiked at a good pace with little stopping. I actually intended to complete today’s section by lunchtime.

I knew that the next section was going to be the longest hike so far, but there was no way of adding a little to this week and cutting out early once one begins the next section.

After months of being at home, there was something about the lack of stress and challenge of this morning that I was thoroughly enjoying. Though on reflection I do have one little complaint. 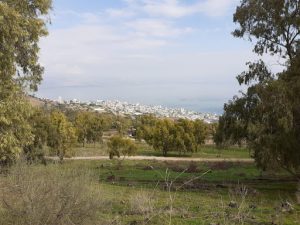 The Swiss Forest that the trail today passed through for much of the distance, is not really a forest. I’ve never been to Switzerland, so maybe this is what forests look like there, but I’m not sure. There were definitely trees, but I’m not sure that it was a forest. We may be doing a disservice to the people of Tiberias (the city can be seen in the picture through the trees of the ‘forest’) if they grow up imagining that ‘their’ forest resembles the forests of central Europe.

The hike passed very smoothly and quickly. A few hikers on the way, even one or two ‘shvilistim’, but no great adventure. Soon it was time to begin ‘the descent’ already.

Though the majority of the trail would be along the ridge of mountains to the west of the Kinneret – I would be walking almost due south the entire time – the last section involved a descent to the shores of the Kinneret itself. 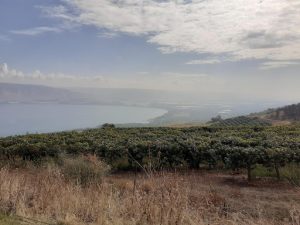 In fact, the hike would end where the Jordan River spills out of the sea and takes its water on south to the Dead Sea. I could see, long before I would arrive there, the point at which this section finishes, as the sea (or lake, if you prefer) closes in on the south to a point from where the river emerges.

The descent through the orchards of the communities of Poriya and Moshav Kinneret was a little trickier than the rest of the hike so far – a little steeper and sometimes less well marked. But soon enough I was at the lowest altitude that I would be at during the entire Israel trail – over 200 metres below sea level – just a matter of metres from the shores of the Kinneret itself.

Not far to go. I just had to make way along the fairly straightforward route through the picturesque community named after the sea, Kinneret, and then past some of the landmarks of the cradle of modern Zionism. If socialist Zionism, that contained so much of the energy of the return of the Jewish people to their land a century ago, had holy sites, then I would be walking amongst them now. 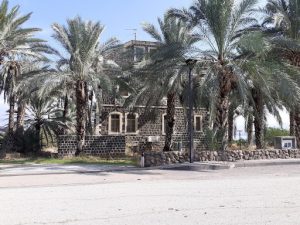 The training farm of the earliest pioneers, the graves of its ideologues, the first palm trees that the workers planted, and of course, just across the road, the first kibbutz of this revolutionary movement, Degania. One of the values that pervaded so much of the movement was austerity – it is no wonder therefore that one of the less well-known sites of this time period was the ‘palace’ (as it was known by the locals) that was built on the edge of the Kinneret moshav. Completed before the outbreak of the First World War, the German-Jewish Treidel family built one of the finest houses in Palestine. (In fact, it was built with the help and expertise of German Christians, Templars, who also lived in Palestine at the time).

It even had the rarest of luxuries that few homes of that period had – an indoor toilet. But those glory days seem to have passed – boarded up and surrounded by impressive but untended palm trees, the palace on the shores of the Kinneret seems to be waiting for a new inspiring ideology to restore it to its former splendour.

And so, after only three and a half hours, I finished this section at the point where the Jordan River begins its journey away from the sea that feeds it. Where today’s hike ends is the baptismal site of Yardenit, normally busy with its myriad of pilgrims, but which was now quiet and desolate due to the ongoing pandemic. And though I know that of all the rivers in the world, the healing properties of the Jordan are proven in the minds of billions of believers, I nevertheless suspected that by the time I would come back here for the next section that, unfortunately, the Christian pilgrims will not have returned.

Day 9: From Yardenit to Gazit Junction