Hiking in the Heat of the Summer

I always check before hiking the (Hebrew) website of ‘moked teva’. They let you know at which hours of the day there will be ‘omes chom’ (‘extreme heat’) and in which parts of the country.

The Upper Galil, where I would be starting the hike was going to remain at safe hiking temperatures, but where I was ending was forecast to be dangerous to hike in from 1 pm onwards. My plan of traveling from Jerusalem, hiking during the central hours of the day, and returning home, all on the same day, was not going to be possible. I needed to finish hiking before 1 pm.

Having played around with different options, I made a last-minute booking on Airbnb for a room near the beginning of the trail in Meron, and made my way up north late at night so I would be able to start early the next morning.

An Early Morning Start, and Mysterious Sounds of Prayer 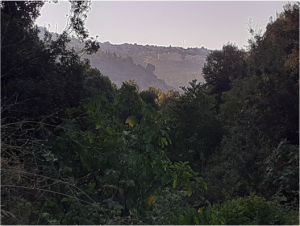 The following morning at 6 am, I was standing on the trail, flask of tea and Weetabix in my backpack and ready to go. It was a great sensation – the summer freshness of the early hour and the shade that still covered the whole valley even though the sun was up. It was going to be over two hours before the sun’s rays even reached me and I remained grateful for the entire hike that I had started when I did. 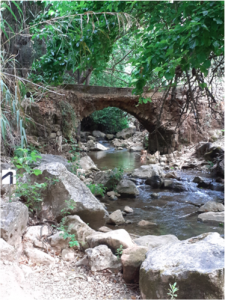 The Hebrew date was Rosh Chodesh Av – the beginning of the new month. Soon after I descended into the depths of the Amud riverbed, which was going to be the geographical feature of the entire trail today, the foliage becomes thicker and the rooftops of the old city of Tzfat that were possible to see earlier on disappeared from view.

And in those depths at the early hour, I suddenly heard the singing of the Hallel prayers of praise for the new month.

Adjacent to the same springs where the mystics of ancient Tzfat would come to purify their bodies and souls, I heard the tuneful voices emanate of those who were looking for a spiritual experience and inspiration many centuries after those early kabbalist masters. I looked for the people from whom the voices came, but I never found them. I know this is how legends begin – particularly in this part of the world – but I really never saw anyone.

The riverbed isn’t so wide, and the voices of those gathered in soulful prayer were definitely near, but my eye never discerned them. And soon the sounds receded as I realized I must have passed them. I’m not saying there weren’t people praying in this mysterious part of the world. It’s just that they were never revealed to me…

As the morning progressed, more than spiritual batteries, it was clear today that I would need physical energy. This was a real hike – the most challenging so far.

Even though a little shorter in distance than Day 2 had been, the terrain was physically more demanding.

The descent of nearly 1,000 meters over the course of the day meant that the hiking in a fairly lightly-traveled part of Israel was more demanding and also slightly less well-marked than previous sections. 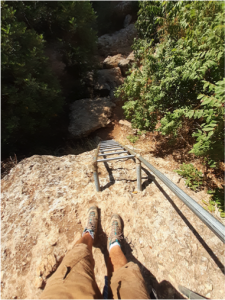 The picture of me peering down one of the ladders that eased (or made more challenging, depending on your viewpoint) the descent gives you an idea of the more rigorous nature of much of the trail today.

As the hours crept on, the trail became slightly less adventurous, but the heat was really becoming very difficult.

And though I knew that I still had about a quarter of the distance to go, I felt a real sense of achievement when I passed under the large road bridge that now crosses the Amud river bed. 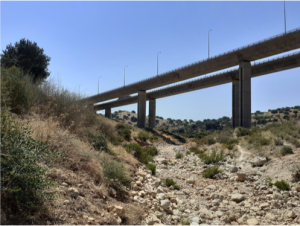 It might not strike you as a scenic addition to the trail, but I felt a real significance in knowing that I had now left the Upper Galil. My bus had passed over this bridge on all previous journeys to the north – and some days my time traveling to the hike and back had been longer than my actual time hiking. Practically though this was the only way to the further reaches of the Upper Galil and I had always peered under it from my bus window wondering what I would have experienced before I myself was actually going to be the one passing underneath.

So now as I passed under the bridge, I felt that I was slowly chipping away at what had seemed like such a big challenge – walking the entire length of the land.

This bridge was now a thing of the past – never again would I travel over it while wondering what it would be like to have hiked all the way from the beginning of the Israel Trail to this point!

The last part of the trail contains the two most famous features of Nachal Amud, the largest riverbed of the north of Israel.

Firstly, you cross the inverted siphon of the Israel Water Carrier. Rather than carrying Israel’s water supply (from the Kinneret to the rest of the country) over the riverbed in an exposed and vulnerable bridge, the siphon is built to bring the water down one very steep side of the dry riverbed that I’m hiking through before rising the other side and continuing its journey across the lower Galil.

I’m sure that once I learned the name of the physics principle that allows this to happen, but for now I remained amazed at the engineering feat – and the almost sci-fi like structure that ascended on either side of me as far as the eye could see. (I’m not sure you’re allowed to photograph it for security reasons). 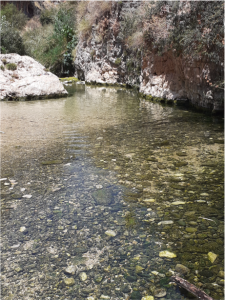 The second and more natural feature – and less impressive some would say – is the ‘amud’ or pillar that gives its name to the Amud riverbed. It’s a rock. Albeit very high and separated somewhat from the surrounding cliff-like sides of the now very deep riverbed, but I will leave it to you to search it out rather than sharing a picture here.

It was a less-known feature that in fact made for a highlight of a challenging and rewarding day’s hiking. I considered making a dash for the end of the trail, where a very remote bus stop with a very infrequent timetable (with a bus supposedly arriving shortly), would allow me to get to Tiberias and then home to Jerusalem. But the heat of the day made even the last few hundred meters difficult, and as I slowed down I realized that I had probably missed my bus.

I settled down in shade and almost accidentally found myself in the clear waters of the Amud spring. Here on the hottest day I had experienced so far, in the middle of the summer, a small pool was continually being refilled from a natural spring with some of the cleanest water I had seen so far. I took my shoes and socks off and realized that in any case in another couple of hours there would be another bus…