I have been reading ‘To the End of the Land’ by David Grossman, one of Israel’s most famous authors. It tells the difficult story of a mother who has a son drafted into the army for combat duty at a time of war.

In an attempt to avoid potential news of his death she begins walking the length of Israel. That way no one will be at home to be informed of his death, and thus the son, at least according to the mother’s plan, will be safe and his death in the war will become an impossibility. Very quickly (actually before the protagonists of the story themselves realize it), one realizes that the mother (and her former lover) are following the route of the Israel trail.

As I have been slowly progressing through the book, the mother in the story, Ora, has been catching up with me. (I feel like I should stay ahead so that I will experience the trail on my own terms…). In any case, I’m nearly at the end of the book (and with the mother still a few kilometres behind me…) when I set out on the trail this week. 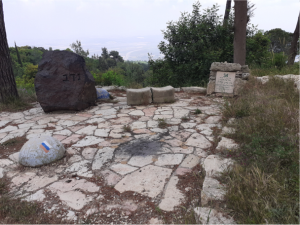 I couldn’t help but reflect when I passed the memorial in the picture – you can just see the soldier’s name, Nadav, and also the Israel Trail marker on the stone in front of it – that if the mother was to pass through here, she would surely pause because it is just such a memorial that she is trying to avoid being necessary for her son. And sure enough, as I completed the book later in the week (after hiking this section), Ora indeed comes across ‘a big dark rock with letters carved deep: Nadav’. Having taken the photo before reading the pages in the book I was somewhat impressed at my own prediction!

And without taking any more of the storyline away from you, the timing came together very nicely as I finished reading the book shortly after returning home from this section – as the mother’s journey along the trail also comes to an end on this section.

The first few kilometres today were some of the slowest I had done so far. It’s true that for nearly four kilometres there is a steady, if not too steep, ascent, up the riverbed of the ‘ma’apilim’ – named for the Jews who made their way across the Carmel ‘illegally’ from the shores of the Mediterranean in order to evade the British quotas on Jewish immigration to Palestine. 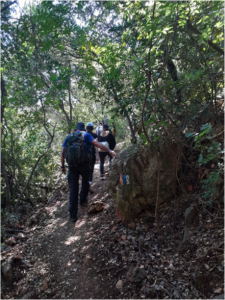 But I learned that the thing most likely to slow one down on the Israel trail is not the difficulty of an ascent, nor the technical challenges along the way, nor inclement weather conditions, but actually walking along a narrow path just a few minutes after an eight-class group of eleventh- graders on their ‘annual tiyul’ have begun their way along the same path.

Of course, I didn’t know at the beginning that there were well over two hundred people in front of me on an impassable path, people who had no particular time constraints – or desire – in their walking along this section of the trail.

I would imagine that their hike today was not an accurate reconstruction of their recent ancestors who fled along this trail in order to escape the British. In any case, I chose a ‘divide and conquer approach’. I joined at the back, and as a class came to a point where they rested, I would make my way (with difficulty – the path never stopped being narrow) past a particular class as they rested and then joined the back of the next one. 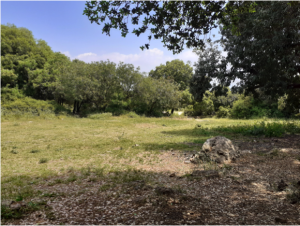 Eventually, after I had made my way past eight classes of students, I made sure to put some distance between myself and the crowd behind, and took a well-earned tea-break in a beautiful clearing that seemed to be remarkably quiet and peaceful after the ‘company’ of the high-school students up to this point.

I made another discovery on the trail today. There is a detailed historical monument and memorial tucked away in the Carmel forest that tells the story of Israel’s War of Attrition with Egypt between the years 1968 and 1970.

It is a less well-known part of Israel’s history and doesn’t attract the same attention as those conflicts which are seen as turning points in the story of Israel.

Well away from the main population centres of the state of Israel, a war along the Suez Canal that resulted in few if any significant changes strategically or diplomatically, the price that was paid is often forgotten.

During the War of Attrition, Israel mourned the death of nearly twice as many soldiers as had been killed in the Six-Day War that preceded this longer conflict.

Partly the lack of a particular date on which to remember this conflict means that it has faded from Israeli public memory. (A similar ‘battle’ for recognition and memory is currently being waged by soldiers who fell in the eighteen years that Israel controlled a ‘security zone’ in south Lebanon). 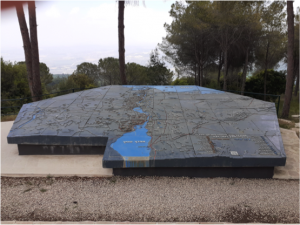 I didn’t know this memorial was here. Actually, I’m still not quite sure why it is here. But the historical relief map (in the picture) and surrounding informational boards allow one to really, at least begin to delve into this part of Israel’s history.

Definitely an interesting find, and just about accessible by car on a country road that would soon take me into the picturesque Druze village of Issafiya.

The afternoon included some challenging hiking. There is a second ridge to climb (the first one is the ridge that the village of Issafiya sits on) in the later afternoon just as one is beginning to feel the kilometres of hiking in one’s legs.

Mount Shokef, as this peak within the Carmel mountain is called, is itself close to 500 metres above sea-level. As its Hebrew names implies, the view from the top of the hill allows you to realise that you’ve finally made it – well almost – to the Mediterranean Coast. 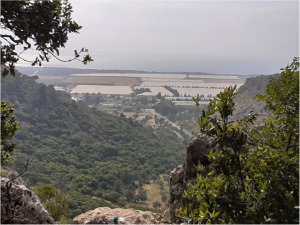 As the expanses of the sea opened in front of me (despite the uncharacteristically overcast late April afternoon), I felt a real achievement. Here it was, in front of me – much of the Mediterranean coastline that I knew I would be following over the next five sections.

And yet, at an altitude of 500 metres, and knowing that I would be finishing not too far from the shoreline, I knew that there was still some serious descending to come. 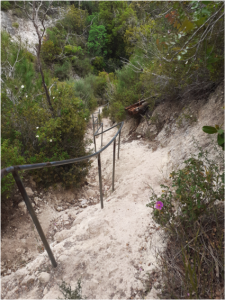 At some points, the trail demanded the help of some well-placed metal bars, whilst at others, it simply was a way of navigating the best way across some large boulders. And there was even my scariest moment so far to come… as I passed a large boulder and emerged from being somewhat hidden during a remote part of the descent I heard a large roar from very close and the sound of charging hoofs of a large animal. It turned out there were two of them. Wild boars. Very big and not happy to see me.

But by the time I understood what they were and in what direction they were running, I was relieved to see that they were in fact heading away from me. ‘How unrealistic’ I had thought when Grossman’s book included a scene in which the couple hiking were threatened by a pack of wild dogs (ok, that’s it, I’m really not giving anything else away from the book) – and now I had my own wild animals experience which really took my heart a good few minutes to return to its regular beat.

With apologies to David Grossman for doubting the credibility of his book. With the drama now over, the mountain spilled me out from its final slopes at the Oren junction, and next time I hiked I would begin the first of five sections that would take me down Israel’s western shoreline. Tel Aviv here I come!