I think ‘ayn hanachot’ would be the correct phrase in Hebrew. Normally used to mean ‘no discounts’ when shopping, but also colloquially it means ‘sorry, there’s no easy way, no shortcut to finish the task’. That’s how today felt. But without any need for an apology.

Eight hours of hiking through the fine scenery of the lower Galil with no apologies on the part of the trail markers for the twists and turns, the meandering, and the diversions which means that this section also ended up coming out as the longest one so far. I have a fine sense of direction, but I was left stumped on many an occasion regarding exactly where I was heading, and how it made sense that the next trail marker went in the direction it did. It really was a full day hike, but the season and weather were very amenable, and I’m so grateful for having hiked this part of the land. 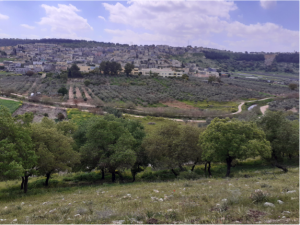 Though the hike begins at one of the busiest intersections of Israel, within a matter of minutes the bustle of Israel’s highways is forgotten.

From the beginning, the (mostly well-marked) trail took in as many aspects of rural life in this part of the world as is possible in one day – forests, fields, small villages, rivers, springs, hills, valleys, and even a winery.

I really only had the need to cross one actual road the whole day. Of course, as I was waiting to cross a car crash took place in front of my eyes – thankfully no one was seriously hurt but the innocent party (in my eyes) was happy that I was present as a witness and gladly took my contact details. How unfortunate (or poetic) it seemed – the two minutes of the whole day that I spent in contact with ‘civilisation’ there had to be a needless moment of rash driving and the resultant aggravation and damage to all involved. I was happy to return very quickly to the unpaved ways of the rest of the hike.

I’ll get to one or two highlights in a moment, but one of the most fun things about the hike today was that you had to stay alert – though it was marked very well, much of the time it wasn’t along clear paths or obvious geographical features. And with all the twists and turns, you could never completely relax and just continue going in the direction you were heading and assume that you were still in the right place. 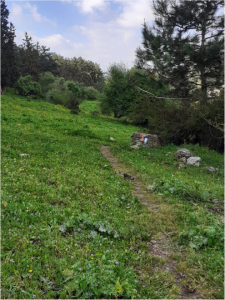 The picture here is somewhat typical – there is a clear trail marker on the rock in the centre of the picture.

But the ‘trail’ is really no more than where the path happens to lead through this hillside. Only slightly worn down by the hikers who have come through here, it is not immediately obvious particularly at the end of a winter when much of the vegetation has grown again.

In fact, immediately after the tree, the trail turns once again, and immediately one is scanning ahead for the next marker. Not quite the level of navigational challenge demanded (I assume) in the elite army units, but still a nice challenge that remained present for much of the day.

There were definitely one or two real highlights during the day. The first one was the beautiful spring in the picture. 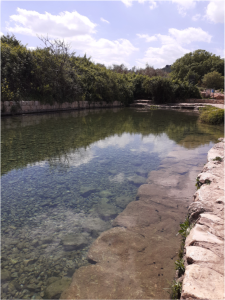 I had no idea it was coming, as was true for so many of the things that were ‘just around the corner’ on the trip.

But as I descended towards the basin of the Tzippori River, I was met by this beautiful pool of water that is one of the sources of the river.

Part of its beauty seems to be that, at least from my sense of having walked there, it is fairly remote and not well-known.

It seemed beautifully clean and a good-sized pool had been cut into the riverbank allowing for the water to spread out over a large area. It was perfectly still and undisturbed and I immediately made a quiet commitment to myself to return and ‘show it off’ to others at a future opportunity.

I fulfilled the commitment just two weeks later when I was in the Galil with my family for a short Pesach break. It was one of the big hits of our trip. I figured out – not easily – how to get as close as possible by car in order to save the younger members of my family a long walk. But even on Pesach, when so much of Israel was out in nature, it wasn’t overcrowded. Perhaps it really is one of the secrets of the Galil. Intentionally I haven’t included the name of the spring on this blog! I hope that isn’t too mean-spirited – perhaps you will walk this section of the Israel trail and find it. But if it stops being a secret I fear that it might lose some of its rugged beauty and feeling of isolation…

And then a second highlight was my choice of lunch stop a few kilometres further on. Perhaps in perfect contrast to the ruggedness of the spring that I had passed earlier, somebody had the wonderful idea of making a section further along the Tzippori river (that drains the rain of the lower Galil into the Mediterranean via the Kishon river) in this fairly remote location, into a landscaped and accessible ‘tayelet’ or promenade. 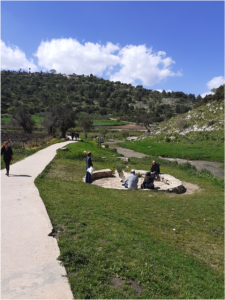 There was even the rarity of a finely-paved and well-organised car park adjacent to this stretch of the river. It really was sculptured most tastefully, with areas to have a picnic, stone benches under trees, well-tended grassy banks, and all the time the river running through the valley. 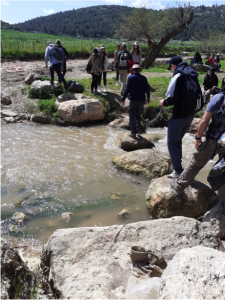 I saw plenty of day-trippers of all ages (and also one or two ‘shvilistim’) out along this promenade. There was a sense of spring in the air, probably more a sense of freedom, as our final (we hope) lockdown had fully come to an end and Israel’s apparently successful vaccination drive allowed a certain laxity in terms of mask-wearing and gathering in groups together.

I was excited to keep going today. I knew I still had a good number of kilometres to hike after lunch. But I had a strong sense psychologically that I was really making progress in the trail.

I couldn’t imagine when I started this adventure nine months ago, what it would feel like to have walked enough and experienced enough that I would arrive at the Mediterranean Sea (which I expected to do at the end of the following section). And even though I calculated that with the completion of today’s section I would have only hiked about twenty percent of the entire trail, I could really see on the map – and feel mentally – movement away from the starting point somewhere way ‘up there’ near the Hermon mountain. 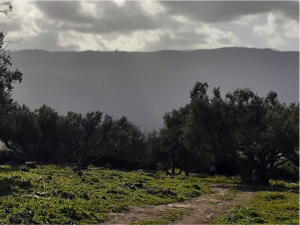 It really was a long afternoon of hiking. A couple of steepish hills to climb up and down, another forest, some more open countryside, and as has happened on more than one previous occasion, the trail departed from the route on my map – and the guide book – and had been extended to take in another picturesque village in this part of the world. So I followed the trail and kept going. I was a little ruffled by a group of somewhat unruly hikers coming from the opposite direction who had started from where I planned to finish, and shared that they took four hours to get to where our paths were crossing. It was already later in the afternoon and I had thought that I couldn’t be too far from the end.

It was a good warning because though it didn’t take me four hours, it was still a good couple of hours walking. One final descent, through the village of Kfar Hasidim (where an ‘unmanned’ rest stop provided cold water and an electric kettle for the use of hikers on the Israel trail), and soon I would be at Kibbutz Yagur where I would end today’s section.

All that now stood in between me and Israel’s western boundary was the Carmel mountain that began to loom large as the day drew to a close. On the other side of that lay the sea – and all I had to do next time was climb up one side and make my way down the other…