I’m right in the middle of the Lower Galil and I feel that progress is slow. Nothing wrong with slow. But the trail has turned now for the last three sections in a westerly direction – and I know for sure that Eilat is in the south.

For five sections, the trail doesn’t actually get any closer to Eilat. Actually, it even takes one a little further away.

And with my hiking being intermittent – due to various corona lockdowns and a busy schedule – I’m guessing that it will be close to half a year until the time I hit the Mediterranean coast and turn south once again.

Another way of thinking of these five sections, of which today is the middle one, is that it is a ‘sea-to-sea’ hike. Less famous and less well-travelled (and longer) than the classic route in the Upper Galil, but I see myself as being in the middle of a trek within a trek. From the Kinneret to the Mediterranean.

So today I’ll put Eilat out of my mind and focus instead mentally (and physically) on the waves of the Mediterranean – which should be just on the other side of the Carmel Mountain that will come into sight today for the first time. Only two more sections after today and I’ll be done!

This central section begins with what one could easily label a ‘less-inspiring’ hike. A few kilometres alongside the asphalt ring-road around Mount Yona (the highest peak in the lower Galil) on the northern edge of the town of Nof HaGalil. 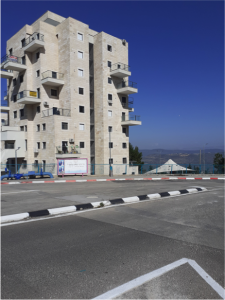 But I’ve made my peace with the so-called less-inspiring sections. You can’t expect every moment of an unbroken 1000-plus kilometre hike to take your breath away. Besides, I actually enjoy the normality of them – of feeling that you’re just taking a walk. Not a hike. Just finding oneself in a place in this land that I would never have gone to – no particular beauty, not on the way to anywhere – just because it happens to be on the Israel trail.

I find these sections relaxing – actually, stress-reducing. In this case, I passed a few new high-rise buildings (that I soon realized were designed for an ultra-orthodox population – the ‘succah’ balconies are the giveaway) on the very edge of the mountain, with wonderful views but somewhat incongruous and isolated on this quiet ring-road. Nothing too remarkable. I look for the next trail marker on the central reservation, walk without expectation, and soon tick off another few more kilometres.

Another place I don’t think that I would have ever gone to, if not for the fact that it is on the Israel Trail, soon follows. The small Arab community of Mashad. Not untypical of Arab communities in the rural north, a picturesque yet unplanned layout, with the trail markers taking one along streets without pavements between the homes of people who seemed to be having very unremarkable mornings. 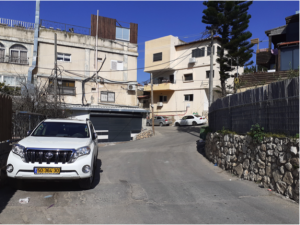 And then there is this wonderful moment when you turn a corner of what seemed to be just another street and between the houses appears the shining dome and minaret of the community mosque. 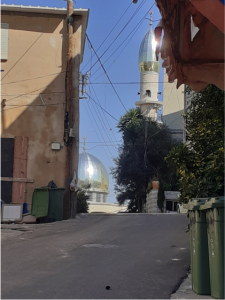 It just seems so splendid and grand and completely unexpected in this small community with its ramshackle streets. It doesn’t seem fair since it doesn’t really have room to make its presence known before one stumbles on it. But I think that’s part of what makes it so exciting to find.

It turns out that the tradition of the mosque is that this is the birthplace of Jonah the prophet (as in ‘Jonah and the whale’). There is a cave under the mosque that lies at the centre of that claim, but I was unable to locate anyone in the vicinity who would be able (or willing) to take me to the cave. So, on I went. Soon the village was behind me and before long I returned to the more ‘expected’ scenery of the countryside of the lower Galil.

I didn’t quite know what to expect here in the centre of the lower Galil. This section seems more to be a ‘connector section’ as opposed to having any outstanding landmarks that draw attention to it as a hike in its own right. It’s the moment when one ends up being closer to the Mediterranean than the Kinneret for the first time since I began the Israel Trail 10 sections and 8 months ago.

But despite its lack of outstanding or famous features, it was nevertheless a stunningly fresh early spring morning – the kind of day when those who are not colour blind (I am) would tremendously enjoy the wildflowers that grow along almost every metre of the trail as soon as one enters the countryside. 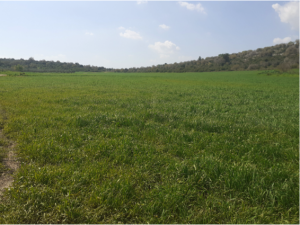 From all the pictures that appear on social media at this time of the year, I know that the done thing is to photograph oneself alongside a natural outcrop of cyclamens or lupins or something similar. I felt it would be fraudulent for me to follow suit since I don’t really see those colours distinctly. But I do however very much appreciate the ‘green’ (as I have been taught to call this colour) – the seemingly never-ending field in the picture struck me as a proud testament to the plentiful winter rains that were now probably approaching their end.

Perhaps to draw attention to this part of the country – and also because it is an accurate reflection of the remarkable historical events that happened here – part of the trail today overlapped with one of Israel’s more recently marked ‘theme’ trails.

The ‘Sanhedrin Trail’ was completed on Israel’s seventieth anniversary to connect the places in this land that were part of the creation of the tradition of Rabbinic Judaism in the centuries following the destruction of the Jewish State two thousand years ago.

The Israel Trail picks up the Sanhedrin trail near the site of Tzippori, the home of Rabbi Yehuda haNasi, the rabbi and political leader who canonized and edited the Jewish oral tradition.

For the next few kilometres, the Israel trail and the Sanhedrin trail overlapped. Since it would not be long before I would be arriving at one of the main junctions in the whole country – from where I had a direct bus home to Jerusalem – I chose a place on this overlapping trail section to enjoy my lunch in the calmness and relative remoteness of the countryside.

It was on a well-positioned picnic bench just outside the tomb of Judah haNesiya, sometimes confused with his grandfather (mentioned above) with a near-identical name. Though just to confuse things, there are traditions that say that, in fact, this is the grave of the Rabbi Judah, the famous grandfather, and that the grandson, who was a prominent leader and teacher in his own right, is actually buried in the north of Israel.

In any case, as I sat down to munch on my sandwiches and have the last of my tea and also ponder on the different options, I soon had company. 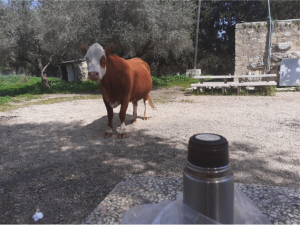 In the picture, the ancient stone tomb-building is in the background, the four-legged visitor in the foreground, and me trying to be inconspicuous behind my flask. I think it worked. Soon I really was alone.

With lunch finished, it wasn’t too much more walking before I reached the busy haMovil junction and did what had probably seemed like an impossibility to the rabbis whose memories are perpetuated on the Sanhedrin trail – I took a bus home to Jerusalem, the capital of an independent Jewish state.