It was a little silly to hike today. Probably even dangerous. The hike would never have been permitted if it had been an official group seeking authorization through official government channels – as school and educational groups are required to do.

You see it had been raining for a number of days before the hike. Though the ascent up the slopes of rocky Mount Tabor left me at times slipping downwards when I was trying to climb upwards, it was the descent that really was perilous and at times left me feeling like I was on a vertical ice-skating rink.

It was probably my slowest kilometre of the entire trail so far. I was so hesitant with every step on a very steep downwards trail – and a little scared of the consequences each time I slipped, thinking what might be if I didn’t manage again to regain my balance. I think that I was more tired by the time I completed the section, because of the strain on my legs, than any of the previous and longer sections. But my nerves also paid a toll.

The good thing was that there was plenty of hiking after Mount Tabor. By the time I finished the whole section I was re-centred and happy that I had gone hiking today, just days before our third lockdown was going to keep me home and away from the trail for another extended period…

Luckily none of what was to come was known to me as I had an absolutely gorgeous morning break for my flask of tea near the beginning of the trail. Back to the routine of taking a very early bus from Jerusalem, I had put off my first cup of the morning until the beginning of the hike.

It was slightly delayed, though it ended up for the best, since there is a discrepancy between the physical trail markings through the village of Shibli, and all the other trail indicators – googlemaps, my guide book, and my trail map – that begin the climb up Mount Tabor without entering the village. I stuck with the minority opinion and followed the physical markers into the village. It was a good decision. 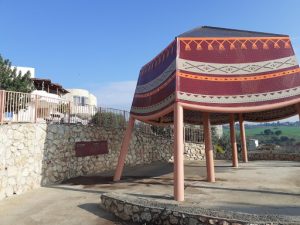 Firstly, the welcoming entrance to the village as marked by the large sculpture-like Bedouin tent. More a memory of the heritage of the people of the village, than a reflection of the reality of their lives today, it was also a reminder that the Bedouin people of Israel live not just in the Negev in the south but also in a few northern communities. 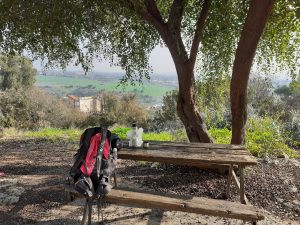 And secondly, as the trail ascended gradually through the village, just before the point at which it rejoined the route as marked by all the other indicators, someone had thoughtfully placed a solitary picnic bench with a magnificent early-morning view over the eastern Galil and much of the route that I had covered in the previous section. There in the slightly cool morning air, I found my happy place – a cup of tea, a biscuit, and increased anticipation to really start crossing the Galil.

And then came Mount Tabor. It wasn’t so enjoyable. The early morning sun was soon replaced by grey clouds, and though it never actually rained, it did mean there was no chance that the slippery walking surface was going to get any drier or safer during the morning.

The steep ascent and dangerous descent were at least broken by a summit trail that was relatively straight forward and winds around a majority of the peak of the mountain. 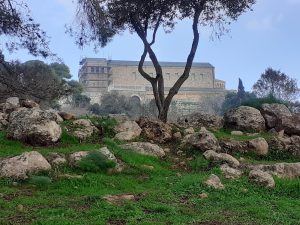 The views in each direction were somewhat limited today due to the weather, but it did give the church at the top a fairly eerie, perhaps romantic look, as drifting clouds would pass along its ancient walls. This most symmetrical of mountains, the ‘belly-button’ (as its Hebrew name also means) of the Galil, was chosen by Christian tradition to mark the moment in their scripture that tells of the ‘transfiguration’ of Jesus. At the top of a mountain his face, after engaging in prayer, became suddenly radiant. And though he may have been the last great religious leader to have a divinely-initiated sparkling countenance, he was of course not the first. I was hiking just a few weeks before the Jewish yearly-reading of the chumash, the five books of Moses, would tell the story of Moses’ face with rays of light emerging from it as he descended from G!d’s presence on Mount Sinai. Further proof that in this part of the world, stories, places, names, and even miracles, have a way of passing through more than one tradition and people. 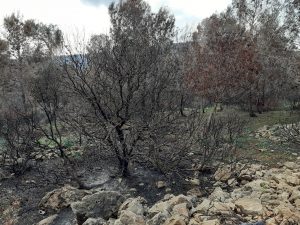 The second half of the hike was much more manageable. A gentle enough trail through the Keshet forest with a second climb of the day coming up after lunch. Mount Deborah, named after the judge-warrior who led the Israelites into battle at the foot of Mount Tabor, was a much kinder climb than the more famous – and larger – Mount Tabor to which she sits adjacent. (Again, apologies for use of the word ‘mountain’ – in many countries around the world it will be told that today I climbed two ‘hills’. But in Israel, we are small a country with a lot of drama. And we use the word ‘mountain’ perhaps more frequently than we should). Underfoot the rocks gave way to a drier plant-like undergrowth, and the slipping and falling dangers of the morning were no longer a factor for the rest of the day.

Sadly, the surrounding forest for much of the rest of the walk retained the scars of the damaging fire that had taken place the previous summer, about four months previously. Luckily, there had been no loss of life, but huge parts of the forest had been ablaze and neighbouring communities had been briefly evacuated for the sake of caution.

I remembered receiving an update immediately after the fire that listed dozens of different trails through the forest that would be closed for an unspecified amount of time. It was just a week or so before I began to walk this section that I received an official update that the trails had all been remarked and any remaining danger from fallen branches or obstacles caused as a result of the fire, had been removed. I would be hard-pressed to claim that the natural process of rehabilitation was visible, but there were clearly areas of the forest that had been less affected, and I understand that Israel’s experience has taught her that the recovery will come soon and even be beneficial for the long-term health of the forest.

I was welcomed to the summit of the Deborah mountain by a plaque and small sculpture telling me that this part of the forest was in fact a ‘royal forest’ that had been dedicated to mark the silver wedding anniversary of my ex-queen, Elizabeth II, and her consort, his Royal Highness Prince Philip. I understand that this celebration was a considerable amount of time ago, and that their long-term marriage has passed through many more valuable metal anniversaries since then. I guess a year ago I would have been happy to send them a picture of their forest, but now as I mentioned, it was looking a little less royal. I hope that future hikers of the Israel trail will soon have more flourishing forest pictures to send their way.

And that was nearly it. It wasn’t a short trail section today. I felt that my progress across the lower Galil had made significant inroads. 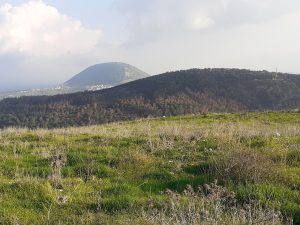 The last part of the route today makes you forget very quickly of the distant world of Mount Tabor, as one passes through overgrown fields underneath the industrial zone of newly-named town of Nof Haglil. There is a steep climb up underneath the cemetery of the city, and then the trail plonks you down rather unceremoniously on the main four-laned road that leads out of the city in the direction of Mount Yona.

Conveniently enough there is a bus stop at that point and soon the bus will come that will take me in the direction of Afula. Just before it does, in this slightly less inspiring part of the trail – though I like the less-inspiring parts as well – I looked back around and understood a little better perhaps why the inhabitants of this town had voted in a democratic process to change the name of their town to the ‘view of the Galil’ town. Both mountains/hills that I had climbed today were spread out underneath me posing as a fitting memento of today’s progress along the Israel Trail.