A bit of bad sportsmanship – two running stories from the region

The first is from the Jerusalem Marathon from last Friday – it all looked amazing and great and beautiful, but now the organizers are feeling a little embarrassed as two of the professional runners that they flew in from Ethiopia to participate in the race to boost its international image, have, (em sorry) made a run for it. Malet Mekonen and Mahalat Zalika were both seen at the beginning of the race running across the start line, but neither of them made it to the end. The race officials in Jerusalem Municipality at first thought they had been injured en route, but now believe the women took the opportunity of being brought to Israel to stay here for “reasons unknown”. Remarkably, all of their belongings, and most importantly their passports, are in the hands of the race organizers, as they brought them to the race, and handed them in to be held in safety in the race lockers!

Last week Jerusalem, next week Tel Aviv, but next month in Gaza is cancelled – another running story

With the Jerusalem Marathon behind us, and the Tel Aviv Marathon planned for the 15th of the month (n.b. there are still places if you want to participate in the 10km or half-marathon), the month of April was meant to see the Third Gaza International Marathon that has been organized by the UN as a fundraiser for the various summer camps that happen in the Strip under the auspices of the USAID. The UN announced yesterday it was cancelling next month’s run as the Hamas Government announced that it would not allow women to participate. The Gaza Strip is pretty much exactly the length of a full marathon course, and for the last two years, significant funding was raised by participants in the race to support the summer camps. But conservative forces in the Strip are raising their voices against the camps and against the participation of women in sports, as they say that they allow “too much contact between the sexes”, and in an attempt to appease those voices, the Hamas Government has made a stand on the marathon too.

The ministry has approved funding for 400km of cycle trails across the country on both urban and inter-urban roads. The project’s main goal is to minimize the deadly accidents that cyclists find themselves involved in, especially when using inter-urban highways. Israel’s competitive cycling community numbers in the thousands, and recreational cyclists bring those numbers up to the tens of thousands. The past few years have seen a growing number of deadly accidents involving competitive road cyclists, both professional and amateur, and as the popularity of the sport grows, the more pressing the infrastructure issue has become. The new grid is likely to cost tens of millions of shekels. The grid will span some 180km in the north of Israel, 100km across the center, and 120km in the south.

This long awaited appointment of a new chief curator at The Diaspora Museum brings a professional into the job with a long record in museum work. Dr. Gover, a writer, a curator, and a project manager, will lead the team that is trying to revitalize the museum that was established in 1978, especially in the re-design  of the permanent exhibition in the museum, along with the internationally renowned museum designer Patrick Gallagher. Gover was previously involved in The Menachem Begin Museum, The Palmach Museum, The Herzl Museum and more.

Berta Yampolsky who founded the Israel Ballet back in 1967 and has been its artistic director ever since was recently fired by the company’s supervising accountant. The director of the company, Lea Lavie, was “unreachable for comment”. Yampolsky made it clear that if she would have been spoken to politely she would have agreed to resign, and felt mortified by the way the company are throwing her out after so many years of service and commitment. In the meantime, the promises to have a new artistic director in place by 1st March are already a few days late, as names are still being thrown around. Amongst the candidates – Itzik Galili, the former director of Galili Dance and Dansgroep Amsterdam, as well having choreographed for many modern dance companies; Mate Moray, a former dancer with The Israel Ballet and director of the The Project – the repertory group at the Israel Opera;  the choreographer and dancer Ido Tadmor; Talia Paz, former soloist with the Swedish Cullberg Ballet; Elie Lazar, former artistic director of The Joffrey Ensemble, and Maria Sachs who directed the Caracas Ballet.

Schwartz expressed his excitement at the new job, and how he envisions continuing to partner with The Jerusalem Foundation to create International Festivals of culture and intellectual thought, that will bring more and more people to Jerusalem. One of the most famous of the festivals is the annual International Writers Festival. Uri Dromi has created and will move on to manage the new International Journalists Club that is due to open next to Mishkanot Sha’ananim in June this year, and is designed to be a hub for all of the international journalists working in Israel.

So much to check out!

The new home of the choreographers association at Machsan 2 in Jaffa Port is continuously full of things I think people should be going to see. In addition they are organizing events in other south Tel Aviv locales – make sure you know where the show is happening when you book. AND YOU SHOULD BOOK AND GO!!!!! So I am just picking out those that, from the advertising, really excite me.

– Bein HaBamah LeKvisah – Between the Stage and the Wash-house – an evening celebrating women in dance as this month marks International Women’s Day. On 13th and 21stMarch at 20:30 AT MACHSAN 2, the evening will be a combination of panel discussion and excerpts of dance created by women.

– An Apartment with Two Rooms – the updated version of this original work by Liat Dror and Nir ben Gal, being restaged for two men – Niv Sheinfeld and Oren Laor on 12th March and 13th April at 20:30 AT TEATRON TMUNA.

– What looks like an incredible evening of performance, dance, music, singing and text by Ruth Dolores Weiss (if you don’t know her music you haven’t lived!!!!!!), Tamar Borer, Yahoo Yaron, and Zamir Havkin – AT THE TEIVA IN JAFFA on 19th and 20th March at 20:30.

Currently Showing at Tel Aviv Museum of Art and worth a visit, especially if you combine your visit to these rooms with a visit to the permanent exhibit of modern Israeli art:

– Fashioning the Object: Bless, Boudicca, Sanda Backlund – the exhibition raises a discussion about the methods and representation of fashion

– (and in the Helena Rubinstein Pavillion for Contemporary Art) ABSALON – a comprehensive exhibiton of work by Israeli-French artist Absalon, 20 years after his death. Absalon’s white cells, made of simple materials, offer proposals for habitation and directly relate to the urban space, presenting a dialogue with the surrounding architecture.

despite Shelly Yachimovitch trying to trample her participation in the Labor Party primaries, Michaeli made it to 5th place on the list!

The speeches and debates in this house over the past month have focused on “an equal sharing of the burden’. Astonishingly, this demand isn’t coming from weakened minorities. It isn’t coming from those excluded from the centers of power, from money and from justice. We’re not seeing the poor demand that tycoons share their burden and resources; women aren’t standing here and demanding equal pay. No. The powerful stand here, those that control Israeli society, demanding an ‘equal sharing of the burden’ from the minority. An upside down world. 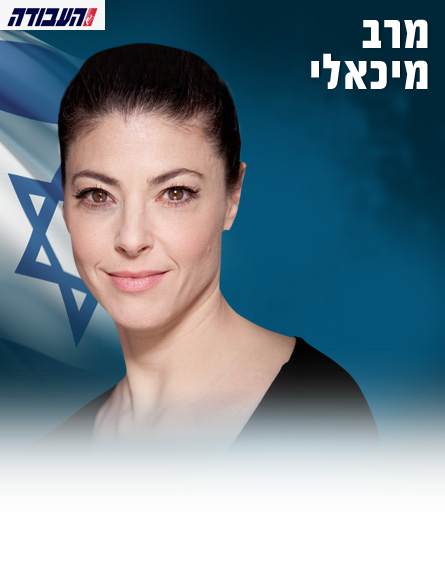