To download as PDF: Culture Connection – Openings and Closure

In significant part due to an awareness of our chronically fragile health system, it was decided that Israel should close down sharply and swiftly the moment the virus began to travel internationally. March 11 saw us begin social distancing, and by 19th March we were all instructed to stay home. Over Seder Night April 8th, we were fully locked-down for a couple of days. Right now, in late April, things are opening up – more of which later. At time of writing, 200 people have died of the virus, with 100 on respiratory machines and over a quarter of all Israeli working adults are unemployed.

The Haredi world has suffered from a terrible spread of the virus, killing or incapacitating huge numbers. At the same time, Coronavirus has dealt Haredim a huge cultural blow, as the government enforced a shut-down of Yeshivot. This social, physical, and spiritual blow has very few parallels in the secular world, and, perhaps, drew less empathy than it might have done. Shay Charka’s representation of Haredim as uniform bowling pins was a little harsh, though far less harsh than many other responses: 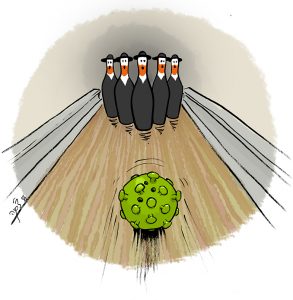 This week we hit the emotional heights of Yom HaZikaron and Yom Ha’atzmaut. It was the cruel genius of David Ben Gurion that led to these two days to be adjacent in the Israeli calendar. For the first few years of the State, Independence and Memorial were marked on the exact same day. When the emotional toll of both mourning and celebrating became too much for the population, the suggestion was to separate the days. It was on Ben Gurion’s insistence that the separation should be wafer-thin. Unlike many other countries, Memorial Day is intimately bound up in Independence Day – it presents itself as the price of the following day’s celebration.

What happens on Yom HaZikaron? Mourning families go to the military cemetery to visit the graves of their loved ones. Until this week. This week the country is going into full lock-down for both the National days, which means that no one will be able to visit their loved ones’ graves. Anshel Pfeffer, a very thoughtful journalist, points out that this is hitting the Israeli in the Holy of Holies. 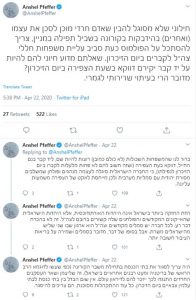 A secular person who is unable to understand why a Haredi person would be willing to risk himself (and others) getting Corona by going to a prayer minyan, ought to look at the current controversy about parents of fallen soldiers visiting their graves on Yom HaZikaron. Have you ever asked yourself why is it essential for them to be by their loved ones at exactly the moment the Yom HaZikaron siren sounds? It is, after all, completely arbitrary timing./

It’s clear to us all that mourning families (not all of course) want to be there, next to their son’s military grave, especially when the siren sounds (and that this is no less important to them than visiting the grave on the date of his death.) Since Israeli society has adopted customs and rituals that combine Jewish tradition with Western symbolism, so it relates to the act of the siren as one of High Meaning./

The strongest religion in Israel is not Orthodox Judaism, but that Israeli Judaism whose sacred icons and whose rituals are mostly connected to the IDF. That isn’t necessarily a bad thing. Every society has sacred symbols, and the IDF is an organization in which two-thirds of Israeli serve. But at the end of the day, we’re talking about symbols, and maintaining public health is more important./

The synagogues should have been closed from the start of the Corona crisis (as for example, the Chief Rabbi of Britain ordered, and a few responsible Rabbis in Israel). That Litzman and the rest of the Haredi operatives opposed this, shall be remembered for their eternal disgrace. There is no difference between a synagogue and a military cemetery on Yom HaZikaron. As long as gatherings are dangerous, they must be closed.

And how does this controversy find expression in art? Shay Charka, prolific caricaturist and illustrator, has been playing with the alien-like character of Coronavirus for a month or two already. His latest illustration relating to the closure of Yom HaZikaron is heart-rending.

An elderly gentleman sits alone, glaring at the Coronavirus sitting beside him, forcing him to stay home. On the table next to him is a picture of his fallen son in army uniform, beside a memorial candle with the “Yizkor” sign. On closer observation we also note that the old man is a Holocaust survivor, exposing his concentration camp tattoo to the stubborn virus. 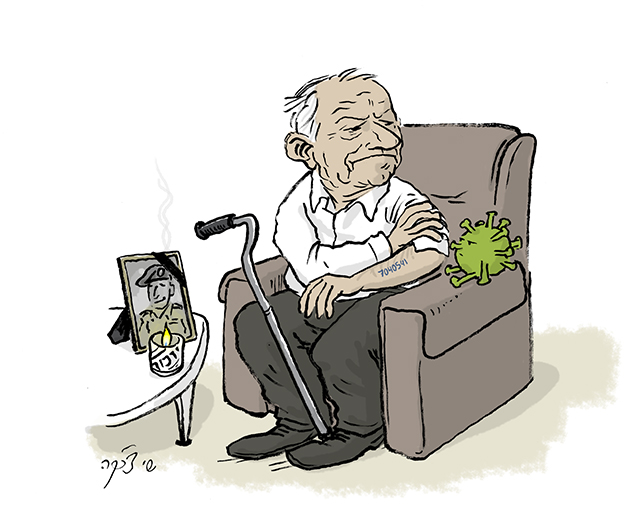 In one of the strangest rulings in these strange times, it was decided last week that all shops must remain closed, but IKEA could open. That’s right: out-door stores, falafel stores, tiny shops owned by small businesses – all these had to remain closed so as to avoid the spread of Coronavirus. But the superstores of IKEA was allowed to open to customers. Hundreds stood in line outside IKEA, looking forward to buy cheap stylish furniture and snack on meatballs and sausages at the IKEA cafeteria.

One musician, Guy Horowitz, found this kind of crazy, and shared a cracking little parody song, set to the classic tune “Shalom Lach Eretz Nehederet” (made famous by Yehoram Gaon, updated by Shaygetz, and stolen from Arlo Guthrie and Steve Goodman).

It’s really worth a watch.

Others found the IKEA deal even more disturbing. Internationally acclaimed novelist Meir Shalev shared accusations that the one of the owners of IKEA had donated large sums to the Gur Hasidim of Health Minister Yaakov Litzman – hence leading to an early opening. (Litzman strongly denies the charge). Shalev went on, in seething irony, to post:

…Only a few kilometers stand between the graveyard of Kibbutz Yagur, and the Kiryat Ata branch of IKEA. It is definitely going to happen that on Tuesday mourning families are going to arrive at Yagur Junction, and there’ll be a police officer there, and the officer will ask them where they are heading. I suggest they answer: “To IKEA!” because if they say the truth, they are liable to be turned away, perhaps accompanied by a fine or report.

And maybe we can take another step towards the open door, and just hold our Yom HaZikaron Service in the IKEA stores. They’re open anyway – for there, as we know, you can’t catch Corona – and they have large car parks, and huge halls, and ushers, and they even sell scented candles, so we won’t notice the stench of discrimination, and they have chairs and wardrobes [the Hebrew for wardrobe, ארון aron, is the same as the word for coffin] – good wardrobes/coffins at comfortable prices, much more comfortable than the oh-so high cost of the coffins at the military cemetery.

The lead-up to Yom HaZikaron is a tough time even when things are normal. But in these Coronatimes, when all our strengths and weaknesses – as individuals and as collectives – are laid bare by the cold winds of the virus, feelings are even more raw than usual.

One for Yom Ha’atzmaut

And so, once you’ve lit your candle, or said amen at someone else’s kaddish, the siren will sound and we’ll move towards celebration. To help you make this transition as we kiss the loss goodbye and open the door to the party, here is a new song about Yom Ha’atzmaut from Ehud Banai based on a true dream!