This chapter focuses specifically on the Harod valley, (the south eastern part of the Yizrael valley), populated by a few poor Arab villages before Zionism arrived there in the Autumn of 1921. For centuries the valley had been sparsely populated and lightly farmed. A place of brackish water and disease. Shavit describes the new situation of Eastern European Jews and of Zionism at the end of the First World War.  The crisis of the former had become much more acute and the forces awakening in the Zionist movement had responded with more radical and widespread solutions, including the idea of large scale settlement in the Yizrael (Jezreel) valley, a valley that resonated with Biblical memory.

He describes the secular and socialist fervor – of the first pioneers of the new kibbutz Ein Harod and accompanies the growth of the kibbutz through its early years and the growth of this radical new pioneering force throughout the valley. The chalutzim were a collective force that came to transform objective reality and to seize control, not just of their own fortunes, but of the fate of the Jewish People as a whole. This was a large scale immigration of the new type of Jew, an ideologically driven Jew who revolted against traditional Judaism and against Diaspora Jewish history. The Jews of the “Exile” were seen as passive, weak, cerebral and fate accepting.  These Zionist valley Jews were determined to create a new active, strong model of a Jew, reclaiming physicality and the redemptive act of physical labor in the Land of Israel.  By “conquering” the valley through their physical labor, they sought to transform themselves and to “conquer” the “exilic” character they had inherited from their parents and which they now rejected.

Shavit concentrates on the secular ”Rebbe” of the valley, Yitzchak Tabenkin, a passionate rebel and anarchist who joined Ein Harod three months after its foundation, at the advanced ago of 34 (most of the settlers were in their late teens or early twenties). Tabenkin, an advocate of an aggressive Zionist activism, symbolizes the determination to end the Exile and to save the Jewish People through a Zionism very different from that of both Herzl and Shavit’s great-grandfather, Herbert Bentwich.

As the Zionism of Ein Harod succeeds in transforming the objective reality, some of the Arab inhabitants of the valley move away but others stay and view the new situation with intense resentment even as their own economic fortunes rise with the valley’s development. They themselves are becoming unwilling participants in a movement that they are powerless to stop.  Jewish history is being transformed and the Arabs are relegated to being onlookers in a historical process that they can neither control nor understand. 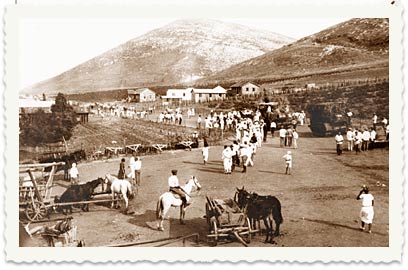 Herzl’s Zionism of 1903 found the use of force unacceptable. But seventeen years later, Zionism was no longer so fastidious. The Great War and the Great Revolution had hardened hearts.

The move is not only brilliant, it is brave. The young Labor Brigade comrades settling in the Valley of Harod do not ask themselves how the eighty thousand Jews living in Palestine in 1921 will deal with the seven hundred thousand Arabs. They do not ask themselves how a tiny avant-garde of ten thousand Palestine socialists will lead the fifteen million of the Jewish Diaspora on an audacious historical adventure. Like Herbert Bentwich, the seventy-four are blessed and cursed with convenient blindness. They see the Arabs but they don’t. They see the marshes but they ignore them. They know that historic circumstances are unfavorable but they believe they will overcome them.

Step after step, they sow wheat and barley, and when they return to the encampment at the end of the day, everyone gathers around them in glee. After eighteen hundred years, the Jews have returned to sow the valley. In the communal dining hall, they sing joyfully. They dance through the night, into the light of dawn.

…they take on the physical labor of tilling the earth, they transform themselves from object to subject, from passive to active, from victims to sovereigns.

As Jewish Europe has no more hope, Jewish youth is all there is… There is hardly any time left. In only twenty years, European Jewry will be wiped out. That’s why the Ein Harod imperative is absolute. There is no compassion in this just-born kibbutz. There is no indulgence, no tolerance, no self-pity.

There is no place for individual rights and individual needs and individual wants. Every single person is on trial. And although remote and desolate, this valley will witness the events that determine whether the Jews can establish a new secular civilization in their ancient homeland. Here it will be revealed whether the ambitious avant-garde is indeed leading its impoverished people to a promised land and a new horizon, or whether this encampment is just another hopeless bridgehead with no masses and no reserves to reinforce it, a bridgehead to yet another valley of death.

I wonder at the incredible feat of Ein Harod. I think of the incredible resilience of the naked as they faced a naked fate in a naked land. I think of the astonishing determination of the orphans to make a motherland for themselves—come hell or high water. I think of that great fire in the belly, a fire without which the valley could not have been cultivated, the land could not have been conquered, the State of the Jews could not have been founded. But I know that the fire will blaze out of control. It will burn the valley’s Palestinians and it will consume itself, too. Its smoldering remains will eventually turn Ein Harod’s exclamation point into a question mark. 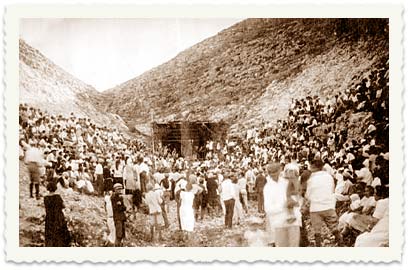 Here are three additional sources that you might want to use in your discussion.

The first, by the very important Jewish and Zionist thinker, Ahad Ha’am (1856-1927), writing in 1890, is a very early call for Chalutzim to rise and take responsibility for the future of the Jewish People. This was his call for an order of what he called Cohanim – Priests – a new (for him, secular) group devoted to the needs of the People. 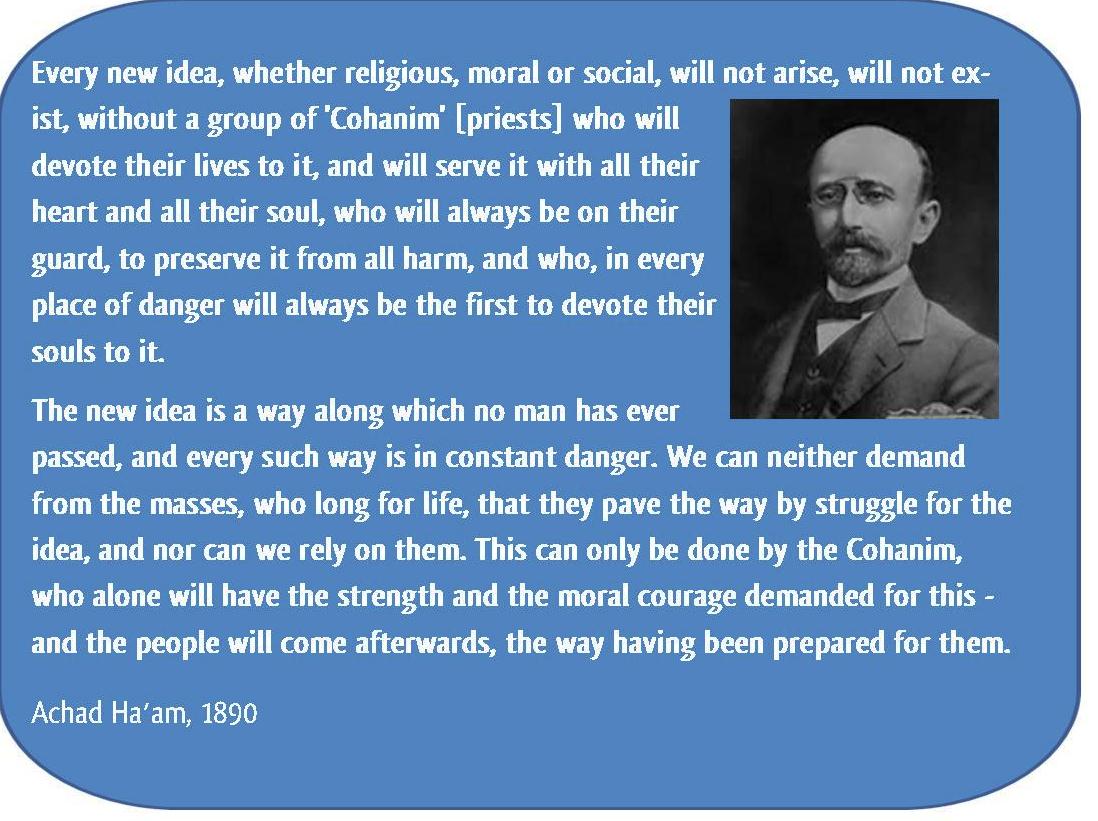 The second source is a poetic description of the Chalutz from Moshe Bassok (1907-1966), an Eastern European poet and writer who became a leader of the organization Hechalutz while he was still in Europe and came on Aliyah in 1936, joining one of the new kibbutzim. It portrays the mythical and tans-historical nature of the Chalutz in the eyes of a central figure in the movement. 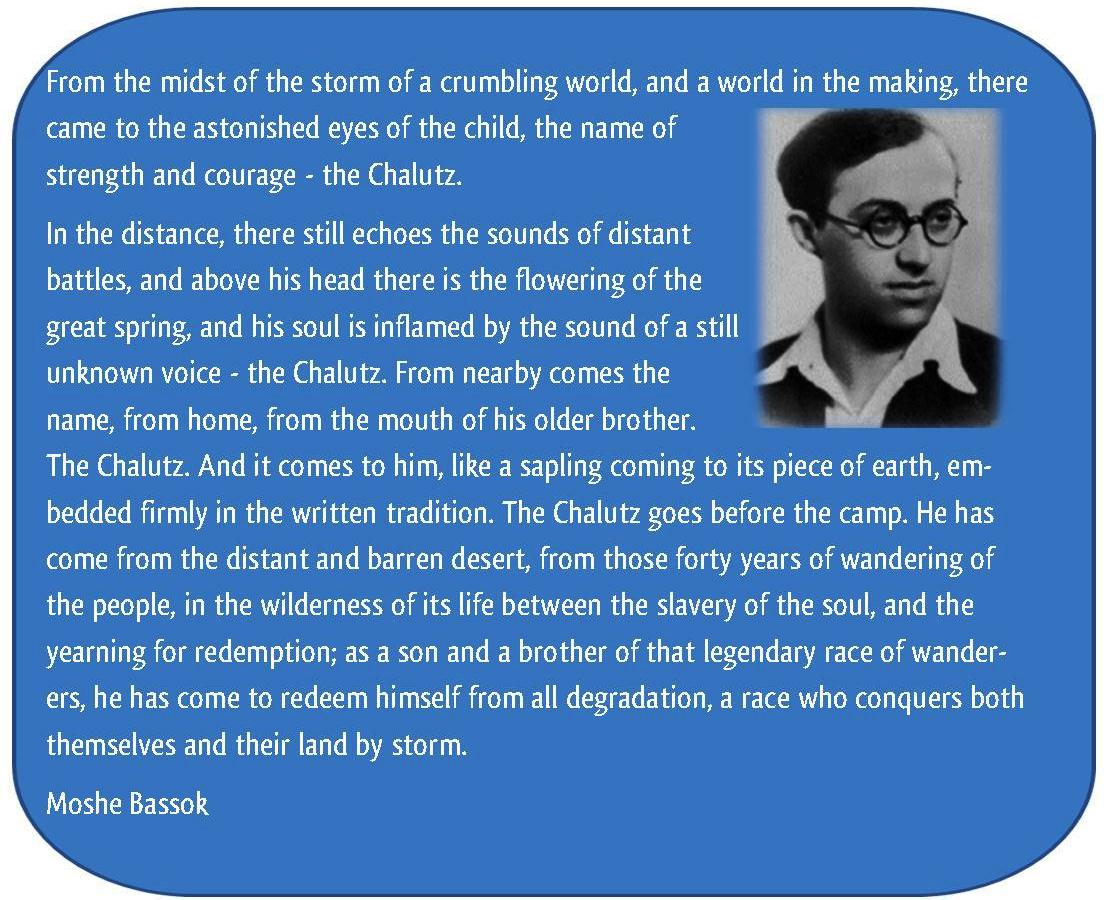 The third piece is from A.D. Gordon, (1856-1922), the major thinker of the new Chalutzic labour movement and one of the deepest and most challenging thinkers of the 20th century.  As opposed to Tabenkin, who in Shavit’s description, cared only for the collective and for whom the individual was basically expendable (in true Russian socialist/communist fashion), for Gordon there was no contradiction between the individual and the nation.  Both would grow together and the individual at his or her peak, would merge mystically with the soul of the collective. 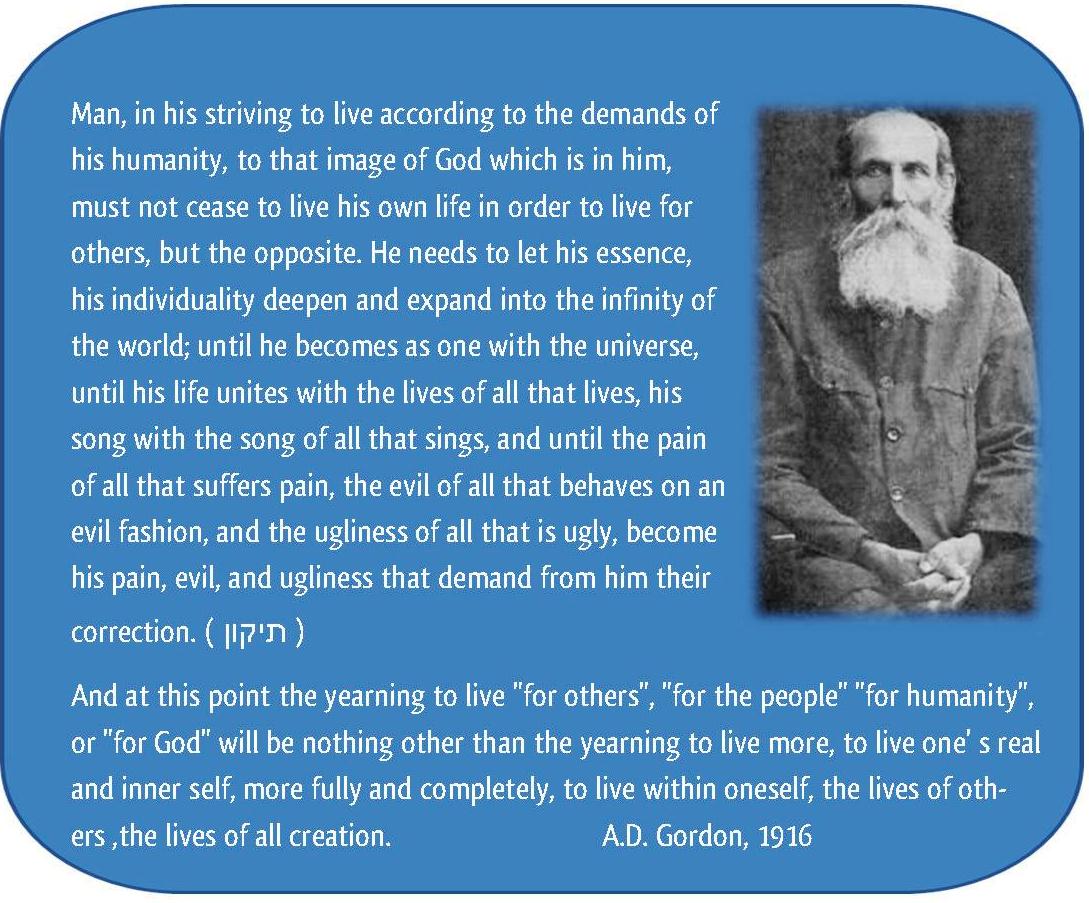 Go to the next conversation: Second Conversation Chapter Four: Masada, 1942