I still prefer Coke over Pepsi. That’s what I tell my students in gap year programs in Israel. This usually comes up when we are discussing the Oslo Accords, signed between Israel and the Palestinians in the 1990’s, or the current BDS movement. When I was growing up, we would order Coke when we went out to eat. If the waitress responded, “We don’t have Coke, would Pepsi be okay?” We were taught to say, “No it would not be okay, we don’t drink Pepsi, they don’t sell to Israel.” That was the 70’s.

The first time I visited Israel was in 1982, on a 6 week summer program between 11th and 12th grades. I made aliyah in 1989. At the time, Israel was on the brink of  a major turning point, though no one knew it. By the end of the millennium the country would be catapulted into a new era of productivity and expansion. But back in the ‘80’s, when I fell in love with Israel, there was only one State run TV station, one Japanese car available, Subaru, and a lot of Mercedes cabs. There were no bagels, no major food chains and no malls.

Why was Israel in the ‘80’s such a provincial place? A major factor was due to the massive Arab boycott of the State of Israel, which was supported by the Soviet bloc and many third world countries. They were so successful that they managed to pass a resolution in the UN General Assembly in 1975 that “Zionism is Racism.”   So a company had to choose, Israel or the Arab world. Coke chose Israel. Pepsi chose the Arab world. As a strongly identified Jewish family, and very pro-Israel, we chose Coke and boycotted Pepsi.

The massive geopolitical, economic and technological changes since the 1990’s has literally transformed Israel into a different country. No longer isolated and with a booming economy, there are no lack of multinational companies doing business with Israel. Looking for a job with a major hitech company, or maybe a particular clothes brand, or you want unlimited TV options; Israel has it all. And I don’t even want to discuss the malls.

Is there still a lot of work to do? Sure. Do we still have enemies that fight for our destruction on and off the battlefield everyday? Of course we do. However, we also need to remind ourselves, once in awhile, how far we’ve come.  It is no longer 1975. We are a strong, proud nation thriving in the middle east. We have literally made the desert bloom and created a modern miracle. So now when I order a Coke in Malha Mall in Jerusalem and I’m told Pepsi is the only option, I smile and say sure, why not.

So let’s get some perspective when talking about BDS to our students. Of course we should  remain vigilant against delegitimization and anti-Israel propaganda. But we need to remember that the world today is very different than the world before the fall of the Soviet Union. The UN revoked the “Zionism is Racism” resolution in 1991 and Israel has diplomatic relationships with 159 countries. It’s our job to teach about history but not be trapped by it.

If, in fact, we are overblowing the effects and achievements of BDS, are we granting them public relations victories? And what is it in the collective Jewish consciousness that causes us to exaggerate our enemies’ prowess? It’s worth discussing with our students. 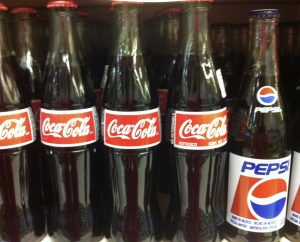