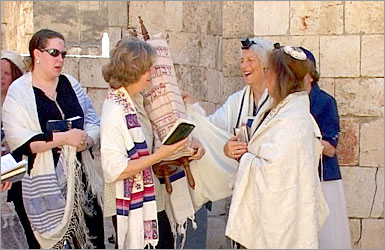 Women at the Temple Margins

If you have been to the Western Wall recently, you may have noticed that the women’s section is markedly smaller than the men’s section, despite the fact that the number of visitors on both sides is approximately the same. This leaves many women feeling disrespected, not to mention uncomfortable, while praying at one of the most holy sites of the Jewish people.

Naomi is a Reform Rabbinical student studying in Jerusalem. This past Rosh Hodesh Kislev, she woke early and joined with Women of the Wall as they walked toward the old city. For the ﬁrst time, she wore a tallit at the Kotel. She was scared; Naomi had heard many stories about rocks, heckling from men and women who were offended by what they saw as a desecration of their holy site, even physical assaults, but felt safe surrounded by this community of women. Singing Hallel, songs of praise, out loud at the Kotel was incredibly powerful.

Women of the Wall works to achieve the social and legal recognition of the right for women to wear prayer shawls, pray and read from the Torah collectively and out loud at the Western Wall. In their social advocacy work, they aim to change the status-quo that is currently preventing women from being able to pray freely at the Western Wall.

“We take it upon ourselves to educate Jewish women and the public about the social, political and personal ramiﬁcations of limiting and eliminating women’s right to pray as a group at a holy site. When the law and the society literally, publicly and deliberately silence women in prayer, it is a violation of civil rights, human rights and religious freedoms. Education is the key to changing perspectives, laws and lives.

They rolled the Torah to the reading for Rosh Hodesh, and then rolled it back up and started the Torah service, led by a young Israeli medical student, Rachel. At this point, the commotion started. Men came over and asked Rachel why she was wearing a tallit, and demanded that she put the Torah away and that we leave. To which Rachel responded, “Because it’s a mitzvah, where is yours?” The police came over and started to lead Rachel away, still holding the sefer Torah and wearing her tallit.

To sign the Women of the Wall’s statement of support, see here: http://womenofthewall.org.il/solidarity/take-a-stand

View their website to donate or learn more about other activities: http://womenofthewall.org.il/