Since Operation Cast Lead,Israelhas seen a relative calm in its security situation. Up until that point, the security situation, for very good reasons, had monopolized the public agenda. This had left a gap of many decades in which internal security issues and social solidarity issues were insufficiently addressed, such as inadequate law enforcement, the issue of Jewish pluralism inIsrael(i.e. conversion), the decline of social solidarity, and the growing gap between the rich and poor, among others.

In the past year, theMediterraneanand Middle Eastern region has seen numerous uprisings, organized largely by the younger generation, and promoted by social media outlets like Facebook and Twitter. While many protests called for political revolution (EgyptandSyria), others called for economic and social change (likeGreeceandSpain). The above conditions have set a tone that is mirrored by the protests that have sprung up inIsraelover the last few months. In a quick review of these and other recent economic lurches around the world, one observes first the collapse of socialism as an effective and workable model for economic growth and human responsibility, and then the repeated cycle of boom and bust that seems to affect market capitalism. It is in light of this economic history that many countries have been seeking a mixed alternative. 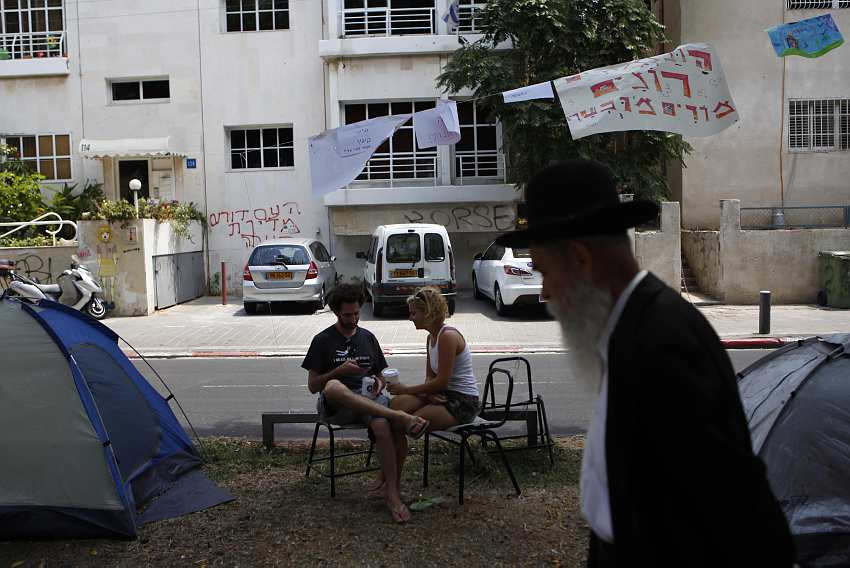 Though all these protests communicated a frustration over the high cost of living in Israel, only one protest has reached the national level and evolved into one of the biggest social protests — if not the biggest — in Israel’s history: the “Tent Protest.” The Tent Protest began over the issues of high housing costs, as several young Tel Aviv residents set up a small tent camp in the center of Tel Aviv’s cultural-business district onRothschild Boulevard. Although it seemed obscure and disorganized at the beginning, the protest began to draw many young people who identified with the cause. In a matter of several days, the small tent camp on Rothschild grew and gathered momentum. The next week, the movement caught the attention of several student organizations and social activists, and similar tent camps popped up in towns acrossIsrael, each one representing the protester’s identification with both the national Tent movement, as well as their own additional local protests.

Initially dismissed as the passing whim of bored, young Tel Avivians, the Tent Protest has now escalated, with recent mass demonstrations counting close to 300,000 protestors in several locations across the country. These protests are characterized by a seemingly unfocused strategy, an absence of overt political affiliation, no clear leadership, and a multi-issue agenda with one unified slogan: “The people want social justice!” This movement has inspired the sense thatIsraelis at the brink of a significant shift in its social, economic, and cultural discourse.

It should be noted that the protests in Israelare characteristically non-violent and peaceful, in contrast with other recent protests around the world, such as the current protests in London  typified by setting fires and rioting in the streets.  It is also worth emphasizing how unprecedented it is for there to be such a huge and popular protest that deliberately does not define its aims according to traditional party-political lines. The feelings associated with the protests are very young, modern, and fluid – something not usually associated with Israeli struggles. Its organizers seem to strive (not always successfully, but increasingly so) to leave entry points open, to defy classification.

The protestors are characterized as typically middle- to upper-middle-class young professionals in their 20s and 30s, most with higher education, who range politically from centrist, to left of center, to radically left. It should be noted that this young generation was born and raised in a differentIsraelthan their parents: they have never experienced the welfare society and only know a free-market economy. As such, they have never experienced the frustrations that came along with such a highly centralized bureaucratic government or the reasons for which this system was abandoned. Perhaps because of this, the protestors often give voice to a romanticized interpretation of the early state years. On the other hand, these young protestors also experienced the ongoing growth of competition in the market and the abundance that flowed to Israeli consumers, allowing them higher standards of living.  At the same time, these young people have been inspired by the power of a strong civil society and its potential to bring about social change.

Security politics has, for the most part, been removed from the dialogue, as protestors from both right and left join together to create change. Recent polls show that up to 87% of Israel’s public support this protest (including 85% of Likud [Binyamin Netanyahu’s political party] voters). Rothschild Boulevard has become a public attraction, with about 100,000 visitors each day going to check out what is going on.